But all those souls grace the Empyrean;
and each of them has gentle life though some
sense the Eternal Spirit more, some less.

I recall a night 30+ years ago when I went camping with my Dad at “The Farm” (though which particular night in which particular year eludes me–there were so many of them). The Farm is a parcel of 90 acres about an hour east of Cleveland that was purchased by my grandfather shortly after World War II. He and the family lived in the city, but for him and the family it was a place to retreat in the summers. Though my memories of my grandfather are few (he died when I was 4), I do know that he was fascinated with just about everything. History and nature were perpetual interests of his as was–as far as I can glean–silence; hence his retreat to the farm as opposed to a cottage on a lake or some other conventional vacation place that would attract urbanites who wished to be temporary country mice. For grandpa, I think he truly wanted a rural life. The parcel has three large fields for crops and the rest, woods. There had been an old farmhouse on the property, but lightening struck it in the 1970s and only remnants of the foundation remained. In 1998, my parents built a house on the property and have since made it their home.

But back in those halcyon days of childhood, the farm was a place to go camping and hunting. Dad, not unlike his father, loved the place and after a week working in the rotten factory he would venture out oftentimes with us kids for an overnight or two of camping. Perpetually behind schedule (whatever that meant), it was not unusual that we would arrive after dark. I remember well the lack of light: only the headlights of the car when we pulled in what passed for a driveway (dangerous if wet, as the car would become a permanent resident) or a single barn light as one looked down the road towards the farmer-neighbor’s. I believe it was on one of these ventures where I first heard the term “overcast” from my father to describe the sky. My recollection of the sky from that time was something both sinister and mysterious–something akin to the movement of the clouds over the Bates mansion in Hitchcock’s Psycho. (Maybe that allusion comes to mind because Dad terrified us with stories of Old Lady Pritchard who inhabited the mysterious and now-gone old farmhouse just east of the farm, but whose visage could still be seen haunting the woods on still and moonless nights.) One could see the clouds passing, alternating hues of gray and black, passing from west to east. The lighter portions of the sky were reflective of the lights in the city of Jefferson about five miles away or, in another direction, I-90 and Route 45. I recall pitching the tent in the darkness; Dad had it all figured out and knew it by heart, no light necessary. My fire making skills at that time were nascent, with all the precision and expertise of a cub scout; but we managed to get the fire going whose light and warmth kept going throughout the night. We made dinner over the fire, somehow more delicious for being made under the open sky with the barest of essentials (I think we may have even shared our food from the same plate)–a feast fit for adventurers! 7-Up was my beverage of choice, while the ubiquitous 12-pack of Genesee beer was Dad’s preference. 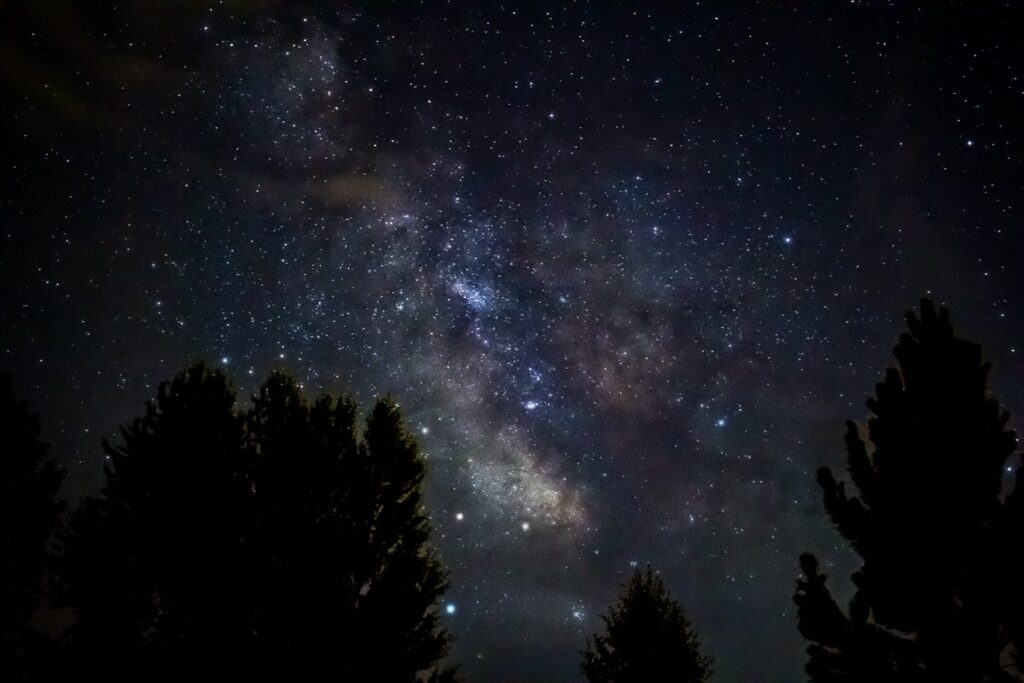 At a certain point that evening, the overcast sky cleared and opened up into a miraculous and awe-inspiring vista of stars. It was all the more memorable for the fact that there was no moon that night, so, truly, the stars were innumerable. We spent the rest of the night star gazing, referring to a book we had brought along of constellations. I’m sure we spoke of things other than the stars, but I know that we kept a steady watch that night. We watched the slow revolution of the stars around the sky and were excited to see new constellations rising as others were disappearing under the horizon. We watched as the Ethiopian Queen Cassiopeia reclined as she made her nightly passage through the sky, as well as the Big Dipper slowly slipping away. Likewise, we identified the interloping planets making their way through the constellations (too bad we didn’t pay attention to Jeane Dixon, we could have really had a good discussion about love, life, compatibility with one’s partner, and future financial success or failure). When the beer was gone and we finally decided to go to bed, it was well into the early morning hours and the sky we saw when the clouds cleared, was not the same when we retired. Those ancient torches still burned but they were passing away.

Aristotle posited that it is wonder that leads people to philosophize. Looking at the stars is, perhaps, the single best way to excite the imagination–i.e., to wonder. I can think of no other human activity that commands the attention of both body and soul. It is something that causes a person to both consider his beginning and his end. One wonders, when he contemplates the heavens, how he came to be–how tiny he is in relation to the wide universe and how improbable his existence. He considers the mystery of how he can take in and, yes, even understand (though only through brief glimmers) the heavens he is contemplating. Questions arise for him what it means to contemplate, what it means to understand, and how he has the capacity to do both. Further, it leads him to ask questions about the fons et origo of all things: how and when did all of this come to be? If he had previously been presented to the baptismal font, his questions take on a deeper and more significant and even emotional meaning: did He really make all of this for me? will my torch, like the stars, burn up and pass away? Or will my light be afixed in the Empyrean of which Dante speaks? These questions arise both as the result of his gaze and in the surrounding silence of the moment.

This article, Stargazing is a post from The Bellarmine Forum.
https://bellarmineforum.org/stargazing/
Do not repost the entire article without written permission. Reasonable excerpts may be reposted so long as it is linked to this page.