The Cosmic Battle, Two Pontiffs, and a Novena

Is it weird to have a favorite holy water font? Well, I do. I’m weird. In the Basilica of St. Paul Outside-the-Walls–not far from the place where the Apostle was buried after being decapitated for the crime of not losing his head–stands a very curious holy water font. The casual Roman parishioner at St. Paul’s has likely seen this font thousands of times and has dipped his fingers in the holy water, crossed himself, and continued on to Mass or devotions or just to visit. Likewise, the typical pilgrim or tourist most likely has done the same, seeking greater shrines or sights in the papal basilica. But this font was erected in an age where catechesis belonged even to the very functional. 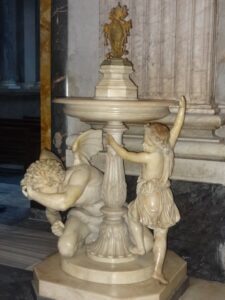 If one were to consider the font, one would see the cosmic drama in nucleo. The child, clad perhaps as a small Roman boy, seems to have a laurel wreath resting on his brow–the ancient symbol of victory. Perhaps the symbol of baptismal grace, the grace of being a son of God. He is climbing the small step of the font, holding on to the font itself for leverage, and extending his other hand toward the water. He is looking at the other, larger figure on the other side of the font. The boy’s expression doesn’t seem to be one of fear, rather it is one of serene confidence. Serious, but not overly concerned. The other figure, on the other hand, experiences great tension. His right fist is clenched and on his thigh, as if beating it in frustration. He seems not to be able to reach that which he wants. A human in form, as he twists his body away from the font one sees his bat-like wings. This is an angel–a fallen one. His ears, deaf to his Creator, are disfigured; his hair, disheveled; his reaction to the blessed water, one of covering his eyes–hiding in terror. If one were to examine this figure more closely, one notices his claw-like feet and a tail–indicating beast-like attributes. His face is both one of anger and fear. Atop the font–almost as a papal stamp of approval–is one of the most popular coats of arms in Roman history: that of Giovanni Maria Mastai-Ferretti, Blessed Pope Pius IX.

I’m not sure when this font was actually erected, but the Pontificate of Pius IX was frought with turmoil both within and without the Church. His was the longest Pontificate in the history of the Church after St. Peter himself. He had to navigate the Barque of Peter through a period of rapid secularization, the loss of the Church’s temporal power, schisms, and a rationalism that was the seed of the modern dictatorship of relativism. His defense of the liberty of the Church was well known and earned him powerful enemies–enemies who would one day take over the Church’s temporal holdings and would capture the minds of many Italians and Romans to a secularism that saw the Church as nothing other than an elderly and senile museum curator.

Giovanni Mastai-Ferretti had started out as a perceived enemy of the more conservative elements of the Church. Indeed, even during the conclave ultimately elected him, the Cardinal Archbishop of Milan was to deliver the “Veto” of the Austrian Monarchy to his candidacy. Masai-Ferretti was elected before the Veto arrived. He had a reputation for loving the poor and downtrodden and had worked in and established “hospitals” for the same. According to a scholar of 19th century Catholicism, David Deavel, Pius IX “knew every beggar in Rome,” such was his love for the poor. And the poor loved him tremendously. He was known for his devotion to Our Lady and the Sacred Heart and he entrusted his cares and those of the Church to both frequently. He was also the pope who urged the Eastern Rites of the Church to maintain their unique liturgies and traditions, championing their rightful juridical structures and establishing a Congregation in the Holy See for that purpose.

While he was open to new political ideas in the beginning of his Pontificate, as the years wore on he realized that the enemies of the Church were unrelenting. He fiercely fought to defend her even as the very walls of St. Peter’s were being assaulted by the new political forces. He ended up finding himself behind those walls as “prisoner of the Vatican.”  Yet, for all of this, his posture was always one of mercy–even to the point of sending one of his private chaplains to the deathbed of one of his fiercest enemies, the excommunicate King Vittorio Emmanuel. The king was reconciled, received the last sacraments, and died in the Church.  When Pius IX died, he desired to be with the people of Rome and was buried ultimately among them in the minor Basilica of St. Lawrence Outside-the-Walls.

In our own day, the secular powers seem, once again, to have overwhelmed the Church’s pastors even at the highest levels. This time the issues are different, but are fruits of the same tree. Whether the issue be homosexual conduct, the environment (to the exclusion of human persons), sloppiness or laziness in thought, or a misguided mercy that is, in reality, toleration of evil, it seems as if the Catholic world is confused in a way that it hasn’t been for 40 years. C.S. Lewis was correct when he put these words into the mouth of a devil when he penned the Screwtape Letters:

Nowhere do we tempt so successfully as on the steps of the altar.

One only read the following news items to confirm Lewis’s contention: here, here, here, here, and here. Quo vadis, Francisce? is on the lips of many of the faithful. In this state of affairs, what ought our posture be? Permit me to offer two thoughts:

Let’s make a resolution to make this novena during some 9-day period in these remaining weeks of Advent for the Holy Father. Tell your friends and send them to the Bellarmine Forum to make this a gift to the Holy Father and to the Church for Christmas. Let us also take care not lose heart. This is an old trick of the Devil. Take deep draughts of the grace available to us through the Church, for we know that this world is not our lasting home. Ours is the long view. It is the cosmic battle of this world for the laurel of the next. Let’s pray for the pope and be comforted by the words of Blessed Pius IX:

In human affairs we must be content to do the best we can and then abandon ourselves to Providence, which will heal our human faults and shortcomings. 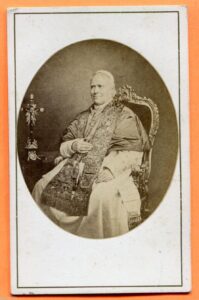 Novena In Honor of Blessed Pius IX for Pope Francis

Most Sacred Heart of Jesus, hear our prayers and glorify your servant Pius IX, who consecrated the Universal Church to you.
(Our Father…)

O Mary conceived without sin, pray for us who have recourse to you, hear our prayer and glorify your servant Pius IX who declared you Immaculate.
(Hail Mary…)

Saint Joseph, spouse of the most pure Virgin Mary, hear our prayer and glorify your servant Pius IX who declared you the Patron of the Universal Church.
(Glory be…)

Most Sacred Heart of Jesus, Immaculate Mary, our Hope, and Saint Joseph hear our prayers and glorify your servant Pius IX , granting to us through his merits and intercessions the graces which we ardently desire: that our Holy Father Pope Francis be preserved from all evil in mind and body and that he wisely and prudently guard and govern the holy Church of God.
(Our Father…, Hail Mary…, Glory be…)

This article, The Cosmic Battle, Two Pontiffs, and a Novena is a post from The Bellarmine Forum.
https://bellarmineforum.org/the-cosmic-battle-two-pontiffs-and-a-novena/
Do not repost the entire article without written permission. Reasonable excerpts may be reposted so long as it is linked to this page.