Man-Made Climate Change has Nothing to do with Nature Videos

This week there was a nature show projected on the face of St. Peter’s in the Vatican. I agree with many of the criticisms of the event, most importantly because St. Peter’s square is recognized worldwide as the place from which the Pope and the Church speak on the things of God. Sure, nature is creation and was created by God, and there’s all that, but to permit a secular message advocating and propagandizing about controverted hypotheses appears to me, in my humble opinion, to be a profanation of the sacred space. I see it as not much different than had they projected the Super Bowl game or a Star Wars movie. 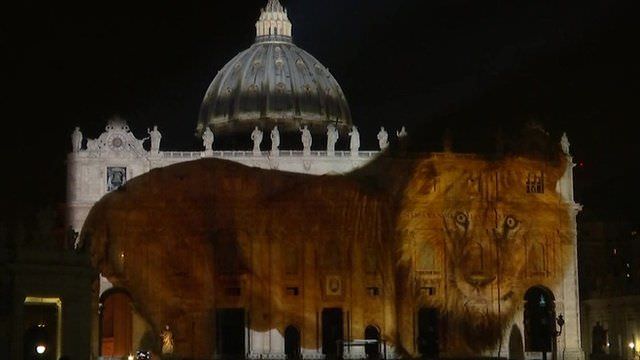 A BBC image of the nature show projected onto St. Peter at the Vatican

Actually, I take that back…  I’d be less offended had it been a vaticanesque Cinema Paridiso (a favorite film of mine).

Apart from the carbon dioxide debacle, which in my informed opinion is a fraud (carbon dioxide is not changing the climate, sorry), and nobody discusses the maunder minimum cycle of the sun in relation to wanting to charge us money to breath, I really don’t need to digress into the hard actual science.

The real problem I have with the Vatican being used this way is that the message was all wrong. Heaven has been warning us. I’ve written on it a lot.

Our Lady has been warning us: There is pending climate change!

Fire from Heaven will fall if man does not repent. So the activity of man that is changing climate is sin. Our Lady warned the children at Fatima. Again, she warned at Akita. Fire will fall from Heaven. The survivors will envy the dead. Paying carbon tax to Goldman Sachs and Co. or any other fraudster politician is not going to absolve sin. Penance, confession, and prayer will.

Why did the Vatican not tell people what Our Lady said about climate change? 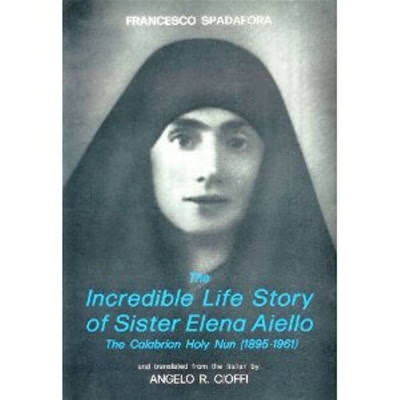 It’s not just Fatima and Akita, but even right there in Italy is the fame of Blessed Elena Aiello. Edifying is her story — she was growing up in Italy around the time of Fatima. This little nun had so many sufferings to deal with, she received the stigmata, she had visions of St. Theresa of the Little Flower, and she even wrote letters to Duce Bonito Mussolini warning him that he must avoid entering the war or Jesus would punish him and Italy. In short, her life is typical of saints, and I find her to be an endearing firecracker of personality and reliance on providence. Just the stories of her staking everything on the providence of God, and teaching others to do the same is wild. In many ways she was like nun version of Padre Pio. She had to suffer a lot of things as did Padre Pio. And yet, in the middle of some ghastly circumstances, she found joy in serving God and bringing others to His service.

Also like Padre Pio, she received many locutions and visions in her life that are regarded as authentic and supernatural.

One vision from the Blessed Mother to Sister Elena:

“People are offending God too much. Were I to show you all the sins committed on a single day, you would surely die of grief. These are grave times. The world is thoroughly upset because it is in a worse condition than at the time of the deluge. Materialism marches on ever fomenting bloody strifes and fratricidal struggles. Clear signs portend that peace is in danger. That scourge, like the shadow of a dark cloud, is now moving across mankind: only my power, as Mother of God, is preventing the outbreak of the storm. All is hanging on a slender thread. When that thread shall snap, Divine Justice shall pounce upon the world and execute its dreadful, purging designs. All the nations shall be punished because sins, like a muddy river, are now covering all the earth.

“The powers of evil are getting ready to strike furiously in every part of the globe. Tragic events are in store for the future. For quite a while, and in many a way, I have warned the world.  The nation’s rulers do indeed understand the gravity of these dangers, but they refuse to acknowledge that it is necessary for all people to practice a truly Christian life to counteract that scourge. Oh, what torture I feel in my heart, on beholding mankind so engrossed in all kinds of things and completely ignoring the most important duty of their reconciliation with God. The time is not far off now when the whole world shall be greatly disturbed. A great deal of blood of just and innocent people as well as saintly priests will be poured out. The Church shall suffer very much and hatred will be at its very peak.

“Italy shall be humiliated and purged in her blood. She shall suffer very much indeed on account of the multitude of sins committed in this privileged nation, the abode of the Vicar of Christ.

“You cannot possibly imagine what is going to happen. A great revolution shall break out and the streets shall be stained with blood. The Pope’s sufferings on this occasion may well be compared to the agony that will shorten his pilgrimage on earth. His successor shall pilot the boat during the storm. But the punishment of the wicked shall not be slow. That will be an exceedingly dreadful day. The earth shall quake so violently as to scare all mankind.  And so, the wicked shall perish according to the inexorably severity of Divine Justice. If possible, publish this message throughout the world, and admonish all the people to do penance and to return right away to God.”

Why? Did the Blessed Mother say anything about carbon dioxide? No. “because men sin” a great earthquake will occur. The wicked shall perish. The remedy? Do penance and reconcile with God.

Jesus appeared to her as well. Jesus didn’t say anything about carbon emissions, carbon footprints, or paying money to Al Gore to remedy things. No. The message is the same as Mary’s:

“[…] Numerous scandals are bringing souls to ruin particularly through the corruption of youth. Stirred up, and unrestrained in the enjoyment of the pleasures of the world, they have degraded their spirit in corruption and sin. The bad example of parents trains the family in scandal and infidelity, instead of virtue and prayer, which is almost dead on the lips of many. Stained and withered is the fountain of faith and sanctity the home.

“The wills of men do not change. They live in their obstinacy of sin. More severe are the scourges and plagues to recall them to the way of God; but men still become furious, like wounded beasts (and harden their hearts against the Grace of God). The world is no longer worthy of pardon, but only of fire, destruction, and death.

“There must be more prayers and penances from the souls faithful to Me, in order to appease the just wrath of God, and to temperate the just sentence of punishment, SUSPENDED on earth by the intercession of My Beloved Mother, who is also the Mother of all men.”

Whoa. That line above that I bolded — “The world is no longer worthy of pardon, but only of fire, destruction, and death.”

This stuff is not going to happen because you set your air conditioner too low and drive a car. And it’s not going to be abated by carbon taxes. Pictures of Kali and animals can’t move people to change their hearts and return to God.

Again, the Blessed Mother tells to Sister Aiello what she said to the children at Fatima as a secret (not revealed then) and the same she’d say to Sr. Sasagawa in Japan decades later:

“Cry out until the priests of God lend their ears to my voice, to advise men that the time is near at hand, and if men do not return to God with prayers and penances, the world will be overturned in a new and more terrible war. Arms most deadly will destroy peoples and nations! The dictators of the earth, specimens infernal, will demolish the churches and desecrate the Holy Eucharist, and will destroy things most dear. In this impious war, much will be destroyed of that which has been built by the hands of man.

“CLOUDS WITH LIGHTNING FLASHES OF FIRE IN THE SKY AND A TEMPEST OF FIRE SHALL FALL UPON THE WORLD. THIS TERRIBLE SCOURGE, NEVER BEFORE SEEN IN THE HISTORY OF HUMANITY, WILL LAST SEVENTY HOURS. GODLESS PERSONS WILL BE CRUSHED AND WIPED OUT. MANY WILL BE LOST BECAUSE THEY REMAIN IN THEIR OBSTINACY OF SIN. THEN SHALL BE SEEN THE POWER OF LIGHT OVER THE POWER OF DARKNESS.

“Be not silent, my daughter, because the hours of darkness, of abandonment, are near. I am bending over the world, holding in suspension the justice of God. OTHERWISE THESE THINGS WOULD ALREADY HAVE NOW COME TO PASS. Prayers and penances are necessary because men MUST RETURN TO GOD and to My Immaculate Heart — the Mediatrix of men to God, and thus THE WORLD WILL BE AT LEAST IN PART SAVED.”

The Blessed Mother spoke to her of Eucharistic abuses that would commence. Sacrileges and offenses to her Son. The same message was at Fatima and Akita — men were set on offending God!

“And all this fire,” concluded the Madonna, “is not that which will fall from the hands of men, but will be hurled directly from the Angels (at the time of the great chastisement or purification that will come upon the earth). Therefore I ask prayers, penance and sacrifice, so I may act as Mediatrix for my Son in order to save souls.”

I encourage you, dear reader, to read more about Sr. Elena’s life, and certainly read the messages she received from Our Lord and Our Blessed Mother.

Why, in the face of these Heavenly messages, are we talking about Gaia, nature, and such?

Shouldn’t the images projected onto the Vatican have been inspired by the REAL warnings of climate change being caused by man?

“The world will be once more afflicted with great calamity; with bloody revolutions; with great earthquakes; with famines; with epidemics; with fearful hurricanes; and with floods from rivers and seas. But if men do not return to God, purifying fire will fall from the Heavens, like snowstorms, on all peoples, and a great part of humanity will be destroyed!” 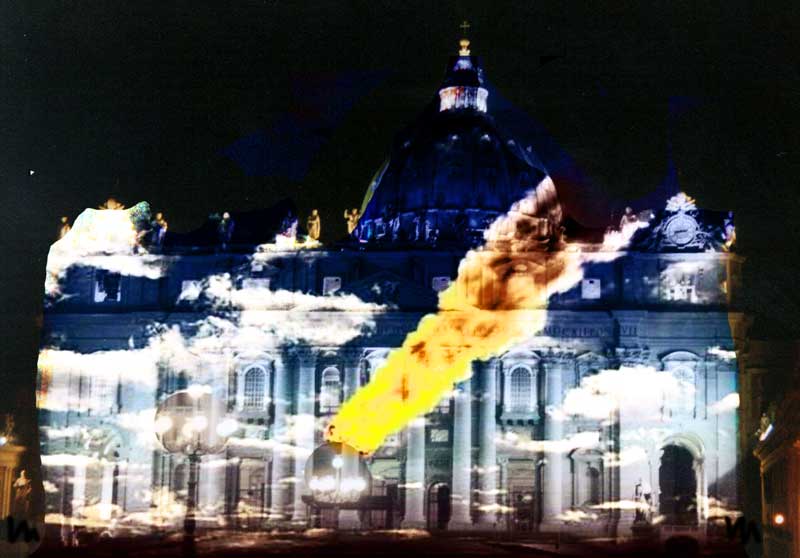 Fire From Heaven will change the climate caused by sinful unrepentant man.

Paying a carbon tax ain’t gonna solve what’s coming. We must repent and pray. Too bad the Vatican can’t seem to tell us that!

This article, Man-Made Climate Change has Nothing to do with Nature Videos is a post from The Bellarmine Forum.
https://bellarmineforum.org/man-made-climate-change-has-nothing-to-do-with-nature-videos/
Do not repost the entire article without written permission. Reasonable excerpts may be reposted so long as it is linked to this page.