The Problem with Catholic Relief Services

Unlike the Catholic Campaign for Human Development, which was founded to fund left-wing political organizations and has never deviated from that path, Catholic Relief Services (CRS) has a long (since 1943) and honorable history of humanitarian service, providing food, clothing and medicines around the world, wherever the need was great. Over time, health care, nutrition education, micro enterprise and agriculture were added to the list of benevolences the poor might expect from this fine project.

However, in 1961, CRS began to accept funds from the United States government through the federal Agency for International Development (USAID), which was designed to provide “economic, development and humanitarian assistance around the world.”1 The secular USAID, as one might expect, has a different understanding about what is meant by “economic, development and humanitarian assistance” than Catholic charity does, so this unequal yoking begat a labyrinth of programs and networks that covered – one might even say, disguised – an increasingly disturbing range of “products.” The problems caused by this partnership were further compounded in 2001, when CRS announced that its single-minded focus on “direct services” would be expanded to include political advocacy initiatives, helping to “evolve a more just society.”2

Over the summer, a number of prestigious pro-life groups exposed the moral ramifications of these shifts, particularly as they reflect on work to protect human life. The globally-focused Population Research Institute issued a press release and a series of articles that charged CRS with supporting population control and “family planning” (including contraception) in Madagascar.3

The U.S. bishops rejoined: “Sadly, in recent weeks some groups have raised questions about this [CRS’s] extraordinary witness to the Gospel of life. They have raised allegations about CRS’ adherence to Church teaching and its identity as a Catholic institution.”4 Claiming to have investigated these concerns, the bishops concluded that CRS’ policy has never advocated the distribution or promotion of artificial contraceptives or abortifacients or abortion.

Of course, no one claimed CRS’ official policies promote such things.

It’s Not the Policies, but the “Implementation”

The concern, rather, is that CRS, as a “(lead) implementing partner” of the U.S. government in the latter’s foreign aid programs – or as an “implementing sub-partner” in the specific case of USAID’s “integrated health-and-family-planning programs” – uses that money in ways that are inconsistent with its “Catholic” policies…though quite consistent with the “family planning” policies of the U.S. government.5

The implementing sub-partner, according to USAID, is “key” to the success of its programs. It is the sub-implementers who actually carry the given U.S. program out into the community because they “have previous experience in working on civil society development in their respective countries, advanced understanding of USAID policies and regulations, and capacity to issue sub-grants in their respective country.”6

So, for example, in Madagascar, CRS was not distributing money to another organization which, in turn, would promote artificial contraception; CRS was itself carrying out birth-control promotion, as an “implementing sub-partner” of the U.S. Government. One can’t blame a CRS grantee for this.

Whatever the “vetting system” is that CRS uses “to ensure that its activities and partnerships with other groups or governments … do not violate Catholic teaching” have not been effective…and can’t be effective so long as CRS operates as a government tool.

A few days after the bishops’ statement, American Life League (ALL) entered the fray with a 9-minute video titled “Contraception Relief Services,” narrated by Michael Hichborn and a report that detailed some of the groups with which CRS is working and that subvert Catholic moral teaching, including “the facilitation, promotion, and in some cases, direct commission of abortion; dispensing and promoting all forms of modern contraception, including abortifacient drugs and devices; [and] facilitating, promoting, and in some cases, direct commission of male and female sterilization.”7

It is not that CRS is itself funding these groups but that CRS is part of a USAID-funded “consortium” that passes U.S. government money back and forth among participating groups for “humanitarian” purposes – which, because of the pro-abortion and pro-contraception bent of the U.S, government, is all too often understood as hawking, and providing, abortion and contraception.

CRS’s occasional function as a financial middleman in this arrangement is in no way necessary to CRS’ authentic Catholic relief service, making its cooperation with this pro-abortion and pro-contraceptive work all the more disturbing.

PRI Report singles out Government, not NGO entanglement as the Problem

While the ALL report and video detail the pro-contraception links between CRS and various international non-governmental organizations, the PRI report emphasizes the problematic relationship between CRS and United States government.

Jon Merrill, the researcher behind Population Research Institute’s report, also emphasizes that the management and staff of the secular and “Catholic” agencies, often not themselves Catholic, who work in this “consortium” have strongly-held pro-contraception beliefs. Founder of Militia Caritatis Dei, an international Catholic charity that rejects government funding, Merrill went to Madagascar and interviewed representatives of USAID, Catholic Relief Services, CARE (Cooperative for Assistance and Relief Everywhere), Population Services International (PSI), RTI International, and a number of other so-called “non”-governmental organizations (including the abortion-providing Marie Stopes International), as well as two prominent archbishops and several officials of the country’s Caritas.8

Archbishop Odon Razanakolona, the president of Caritas-Madagascar, told Merrill that the bishops of Madagascar want to “deal with the [American] bishops, and not with an institution that isn’t…that only has in its name a ‘C’.” Around that capital “C,” the archbishop made the gesture of scratching quotation marks. “[W]hen almost every Catholic Church priest, bishop, and official whom I spoke to in Madagascar figuratively put those quotes around the ‘C’ in CRS,” Merrill explains in his report, “and when the archbishop of the capital city of that country, in my conversation with him, literally drew those quotes around the ‘C’…that was good enough for me.”

The point being made is that the organization is no longer under the control of the bishops, in any meaningful way, but for all practical purposes has become a government front. It creates an almost humorous conspiratorial concern, with one interviewee confiding: “Sometimes CRS seems to us more like an American-government organization than an actual Catholic organization. After a meeting with the previous CRS country representative, the bishops came away saying among themselves: ‘Is that fellow an agent/employee of the U.S. Government? Is he a ‘spy’?”9

Merrill’s interviewees frequently tried to explain CRS’ problems as staffing issues. Fr. François de Paule Rakotondrasolo, vicar at St. Vincent de Paul Church in Antananarivo told Merrill that “C”RS was recruiting Protestants in Madagascar and those Protestants didn’t know the teachings of the Church.10 That observation is made again and again by Merrill’s interviewees, with one claiming only 15% of CRS-Madagascar employees are Catholic and pointing out that includes its “number two and number three” men.11

The Government Insistence on Contraception and Abortifacients Root the Problem

But it is really the government money driving most of CRS’ problems. For example, consider CRS’ relationship to “community health workers” in the USAID-funded “integrated health and family planning” program, SantéNet (HealthNet). This small army of volunteers reaches the remote, under-served areas of the country and has been trained to provide all manner of primary health care, such as the detection and treatment of malaria, pneumonia and diarrhea; nutrition advice; breastfeeding assistance; pregnancy screening…and family planning provisions.

Under this USAID-funded program, “health technicians” employed by CRS, CARE, and other organizations – including local “Catholic” or “diocesan” organizations – are hired to provide on-site support to the community health workers in all their activities, including promotion of the full range of modern contraceptive and abortifacient devices and drugs to poor women. Merrill interviewees – local USAID managers and supervisors of the program, and CRS health technicians – reported that USG-funded CRS health technicians operated in precisely the same manner as their CARE and other “humanitarian” counterparts. All USAID-funded health technicians – Catholic, non-Catholic, those from CRS or from CARE – are, by contractual obligation, obliged to facilitate the provision of the full, “global package” of modern contraceptives to local women.

The spectrum of organizations and the bureaucratic magnificence of these interwoven “culture of death” programs and organizations is numbing and only hints at the magnitude of the abuse. The network of international family planning “services” (i.e. abortion providers in a country where abortion is not yet legal) and funding organizations is connected to massive pro-contraceptive propaganda efforts that blanket this beleaguered African island, vitiating the work of African Catholics to promote sound moral teaching.

Wet Blanket or Velvet Glove over the Government Fist?

There is yet another discouraging element in all this. One interviewee thought the bad reputation CRS has among local priests is because “CRS has its own strategy in Madagascar which it ‘imposes’ on diocese(s)….People [in Malagasy Catholic structures] would like CRS to work with them as partners, as equals, rather than having an already-established plan (by CRS) imposed on them.”12 Coercion and paternalism are not acceptable in an organization sporting the name “Catholic.” How many encyclicals does the Church have to write to drive this home?13 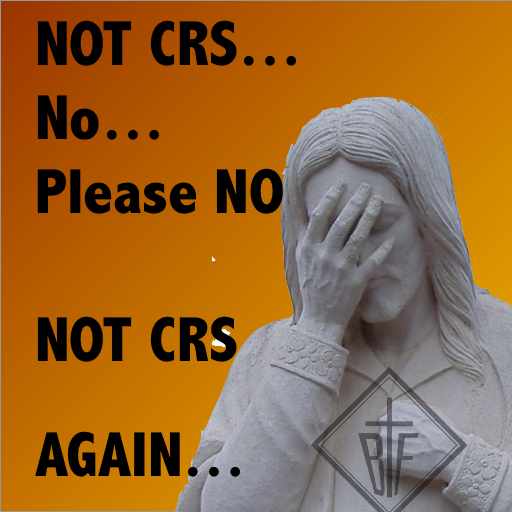 8. Unless noted otherwise, all further material is taken from Jon Merrill’s report, “The Immaculate Contraception: How the U.S. Government Agency “Catholic” Relief Services Doesn’t Do Family Planning in Madagascar (Or Anywhere Else in the World),”November-December 2012: On-Site Investigation.

9. Interview with Eryck Randrianandrasana, Project Coordinator of [“C”RS-funded] “Taratra” project; and Administrative Delegate, Caritas-Madagascar, at the offices of the Bishops Conference of Madagascar (CEM), Antananarivo, 19 November 2012.

This article, The Problem with Catholic Relief Services is a post from The Bellarmine Forum.
https://bellarmineforum.org/the-problem-with-catholic-relief-services/
Do not repost the entire article without written permission. Reasonable excerpts may be reposted so long as it is linked to this page.