The Return of AmChurch? – New York at Center of Suspension of Sheen’s Cause 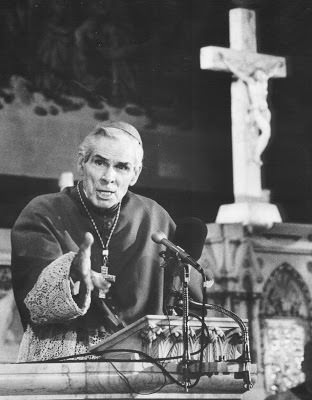 With recent news from New York it is strange that today the Most Reverend Daniel R. Jenky, CSC, Bishop of Peoria and President of the Archbishop Fulton J. Sheen Foundation, announced that the Cause for Sheen’s beatification and canonization has for the foreseeable future been suspended.

Just two years ago, on September 9, 2012, a Mass of Thanksgiving was held, and the releases at that time had predicted speedy progress on the cause. But, even then, there was some wise caution on the speed — “only God knows and we never presume,” said Msgr. Deptula, executive director of the Sheen Foundation,  “Only God makes saints, and only the church declares someone a saint.” But Msgr. Deptula acknowledged “the historic speed” with which the cause is progressing.

In a press release today from the diocese:

The process to verify a possible miracle attributed to Sheen had been going extremely well, and only awaited a vote of the Cardinals and the approval of the Holy Father. There was every indication that a possible date for beatification in Peoria would have been scheduled for as early as the coming year. The Holy See expected that the remains of Venerable Sheen would be moved to Peoria where official inspection would be made and first class relics be taken. Subsequently, the Archdiocese of New York denied Bishop Jenky’s request to move the body to Peoria. After further discussion with Rome, it was decided that the Sheen Cause would now have to be relegated to the Congregation’s historic archive.

Countless supporters especially from the local church in Central Illinois have given their time, treasure and talent for this good work with the clear understanding that the body of Venerable Sheen would return to the Diocese. Bishop Jenky was personally assured on several occasions by the Archdiocese of New York that the transfer of the body would take place at the appropriate time. New York’s change of mind took place as the work on behalf of the Cause had reached a significant stage.

via The Catholic Post : Featured Article – Sheen cause suspended, call for prayer.

So, it appears New York is at the center of news again. Sheen, in many ways, was everything AmChurch does not want to be. Kind of like AmChurch is not parishes like Our Saviour in New York, a clear speaking, outspoken, well catechizing Bishop like Sheen is not AmChurch’s style. It’s not clear that ideology is at the center of any of this, however, it is coincidental and makes it looks like the Archdiocese of New York is backsliding into the 80s. When Cardinal Dolan was elevated, he made many comments and public speeches that it was his goal to bring better catechesis, and clearer transmission of the faith. He even, as we have extolled, told the faithful to challenge the bishops to teach Humanae Vitae and apologized for the silence.

In fact, Cardinal Dolan had been very energetic about Sheen’s cause. In 2009, Cardinal Dolan celebrated a Mass of Thanksgiving for Sheen and announced it, “I am honored to be the principal celebrant and homilist at the Mass to commemorate his life.  […] What a marvelous tribute to this devoted, tireless, holy son of the church whom Pope John Paul II called ‘Preacher to the World’ in the Sanctuary of Saint Patrick’s Cathedral, the very place I will be preaching tonight.”

[…] Although the same release quoted the Bishop of Peoria as having stated that the Archdiocese of New York might take-up the cause, and although the Archdiocese received volumes of mail urging it to do so from cardinals, bishops, faithful around the world, members of the Sheen Foundation and even the archbishop’s family, it took no explicit action in the hope that the Diocese of Peoria might reconsider its decision to resume the cause.

Perhaps the Foundation could be made aware of correspondence from Archbishop Dolan to Bishop Jenky of October 23, 2010, which would clarify this regrettable and inaccurate charge by the Foundation [that “New York had failed ‘to fulfill a verbal promise to transfer Sheen’s remains’ to Peoria”.]  In the aforementioned letter, the archbishop assured the bishop that he was more than happy to continue his research into the question of the transfer of the remains, but that his study on the matter had already revealed that there was in fact no evidence of such a verbal promise; that Archbishop Sheen’s Last Will and Testament expressed a desire for burial in New York; that Archbishop Sheen had gratefully accepted Cardinal Terence Cooke’s invitation for interment in the crypt beneath the main altar of Saint Patrick’s Cathedral traditionally reserved for its archbishops; that the Congregation for Saints had, in 2005, explicitly instructed Cardinal Edward Egan, then-Archbishop of New York, not to transfer the remains; and that Archbishop Sheen’s family was strong in its preference that his remains stay in place at Saint Patrick’s Cathedral.

see the original here.  So there was controversy over this very point already in the past. Is the renewed charge today just puffery by Peoria? I don’t know, but we can be sure we’ll see more kerfuffle in the communications and press releases to be shot this week. It’s unfortunate to see New York at the center of this disappointing news, though.

Crushing beautiful parishes, closing traditional parishes, and now, being at the center of halting Sheen’s advancing cause certainly harkens to a different vein than Dolan’s original energy. It reminds of AmChurch. What’s happening to NYC?

UPDATE:  There are several other things to consider in the kerfuffle. Sheen was born in Illinois, but desired to be buried in NY, where he is. So this is tension between his birth place and his resting place at one level. Certainly, the Church wouldn’t be preoccupied with the deluge of money pilgrims will bring the the place of his repose at his canonization.

This article, The Return of AmChurch? – New York at Center of Suspension of Sheen’s Cause is a post from The Bellarmine Forum.
https://bellarmineforum.org/the-return-of-amchurch-new-york-at-center-of-suspension-of-sheens-cause/
Do not repost the entire article without written permission. Reasonable excerpts may be reposted so long as it is linked to this page.