The Two Standards: Truth Incarnate or The Father of Lies.

Liars are children of the devil by imitation. 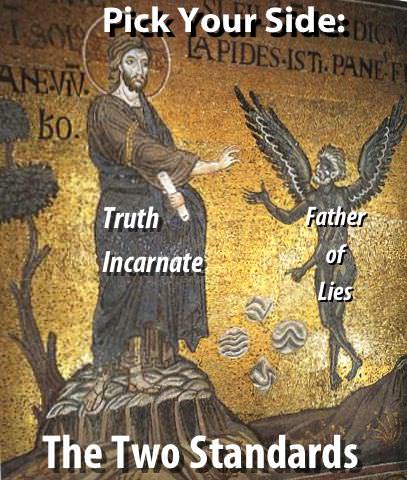 Recently, I saw a disgusting sight on Kevin O’Brien’s blog as people reacted to a post wherein Kevin exhorted people to tell the truth (he gives more examples in his post about this article). The comments are horrid and remind one that no matter how pious and clean the outside, like the Pharisees, it’s what one believes and does from the inside that matters. There is a side discussion going on there wherein they are parsing a Chesterton quote on whether one can deceive — the discussion seems to be missing the terms “open mental reservation” versus “closed mental reservations.” I’ll leave that part of the discussion for another day. Chesterton himself was referring to “Jesuitry” which was a misnomer for an error of the day that attributed Voltaire’s justification of lying as if the Jesuits taught it — this has never been the case as it was always the case that “The end does not justify the means.”  Back to the matter of telling the truth:

I’ve been working on the question of why nobody in the Church talks about telling the truth anymore, especially since I posted the Theology of the Body (ToB) in One Paragraph noting that one sure path to chastity is telling the truth (but you’ll never hear that from the ToB people — despite the fact that about 10% of JPII’s ToB talks were precisely on telling the truth). That’s because chastity is a mirror of inside and out — it is to the body what telling the truth is to the mind. It is here — the inconsistency between what is spoken and what is held in the mind where we see it:

Jesus warned the Pharisees of duplicity, clearly stating the problem: “whited sepulchers, which indeed are beautiful on the outside but full of dead mens bones.” Liars are by the words they use to project false reality, making themselves different on the outside than they are on the inside. Such duplicity is abhorrent to God, and it’s unreal to see anyone attack someone for saying that lying in wrong.

Nevertheless, because nobody talks about the basic duty to tell the truth, I’ve compiled some motivational catechesis below. It goes without saying that God does not lie — He is truth. Thus, lying is not of God. It’s that simple. Yet, since people need to be reminded, here is a mini-catechism on truth.

1. The liar is like the devil and displeasing to God.

He who forfeits the confidence of his fellow-men causes a great deal of harm and is capable of committing all manner of evil [sub sinful or erroneous] deeds.

The liar resembles the devil, for the devil is a liar and the father thereof (John viii. 44). Remember how the serpent in paradise lied to Eve. Liars are children of the devil, not by nature, but by imitation. The liar is displeasing to God. God is truth itself, and therefore He abhors the liar. Our Lord did not speak as sharply of any one as of the Pharisees. And why? Because they were hypocrites (Matt. xxiii. 27).

Liars and Pharisees Are the only ones not Repented in the Gospels.  From every class of sinners He gave an example of one who was saved; e.g., Zacheus among usurers, the good thief among highwaymen, Magdalen and the Samaritan at Jacob’s well among profligate women, Saul among persecutors of the Church, but not one single individual among liars and hypocrites did He mention as having sought and found pardon.

Many a time God punished liars severely: witness Ananias and his wife Saphira, who for their falsehood fell dead at St. Peter’s feet (Acts v.) and Giezi, the servant of Eliseus, who was struck with leprosy for his lies and avarice (4 Kings V.). “Lying lips are an abomination to the Lord” (Prov. xii. 22).

The liar forfeits the trust of his fellow-men. The shepherd who cried “Wolf” when no wolf was near, found he was not believed when his flock was really attacked; his comrades had been so often deceived that they did not heed his cries. A liar is not trusted when he speaks the truth; he is hated by God and man.

Liars often do a great deal of harm. The spies who went to view the Promised Land deceived the Israelites by their false report, and alarmed them so that they blasphemed God, wanted to stone the two spies who spoke the truth, and clamored to return to Egypt. See what mischief those men wrought: God declared His intention to destroy the people (Numb. xiii.). Jacob deceived his father and obtained his blessing fraudulently; his brother Esau threatened to kill him and Jacob was obliged to take to flight. “He that hath no guard on his speech shall meet with evils” (Prov. xiii. 3).

The liar falls into many other sins. “Show me a liar and I will show you a thief.” Where you find hypocrisy, you find cheating and all manner of evil practices. A liar cannot possibly be God-fearing. The Holy Spirit will flee from the deceitful (Wisd. i. 5). All the piety and devotion of one whose words serve to conceal, not to express his thoughts, is a mere sham; do not associate with such a one, lest he corrupt you with his ungodly ways. “Lying men are without honor” (Eccles./Sirach xx. 28). “The just shall hate a lying word ” (Prov. xiii. 5).

2. The pernicious habit of lying leads a man into mortal sin and to eternal perdition.

Lying is in itself a venial sin; but it can easily become a mortal sin if it is the means of doing great harm, or causing great scandal. He who indulges the habit of lying runs no small risk of losing his soul, for God withdraws His grace from those who deceive their neighbor. “The mouth that belieth killeth the soul” (Wisd. i. 11).

A thief is not so bad as a liar, for the thief can give back what he has stolen, whereas the liar cannot restore his neighbor’s good name, of which he has robbed him.
“A thief is better than a man that is always lying; but both of them shall inherit destruction” (Eccles. xx. 27). A lie is a foul blot in a man (v. 26).

The soul of the liar is like a counterfeit coin, stamped with the devil’s effigy; when at the Last Day, the Judge shall ask: “Whose image is this?” the answer will be “the devil’s;” and He will then say: “Render unto the devil the things that are his” (St. Thomas Aquinas). (!)

The Lord will destroy all that speak a lie (Ps. v. 7). Liars shall have their portion in the lake burning with fire (Apoc. xxi. 8). Our Lord uttered a terrible denunciation of the Pharisees because of their hypocrisy (Matt, xxiii. 13).

Lying is consequently forbidden, even if it may be the means of effecting much good.

St. Augustine says it is just as wrong to tell a lie for your neighbor’s advantage as to steal for the good of the poor. Not even to save one’s own life or the life of another, is a falsehood justifiable. St. Anthimus, Bishop of Nicomedia, would not allow the soldiers who were sent to arrest him, and who were enjoying his hospitality, to save him by a lie; he preferred to suffer martyrdom. We must not do evil that there may come good (Rom. iii. 8). The end does not justify the means, even if seems like it could.

This article, The Two Standards: Truth Incarnate or The Father of Lies. is a post from The Bellarmine Forum.
https://bellarmineforum.org/the-two-standards-truth-incarnate-or-the-father-of-lies/
Do not repost the entire article without written permission. Reasonable excerpts may be reposted so long as it is linked to this page.