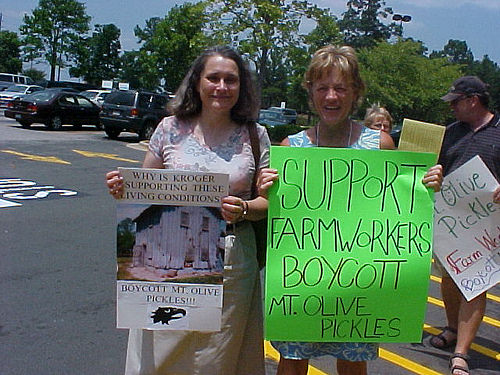 FLOC – the Farm Labor Organizing Committee – is a branch of the AFL-CIO.  Founded by openly-Catholic Baldemar Velasquez, this migrant farm workers union has received a lot of support from the Catholic Church in the United States over the years, including numerous grants and recognition over the years from the Catholic Campaign for Human Development.

In 1996, FLOC and other unions met in Cleveland, Ohio to launch a new political party, the Labor Party.  John Sweeney, who had become president of the AFL-CIO a year earlier and had one foot in the Catholic bureaucracy, serving on the United States Catholic Conference domestic policy committee, supported the effort.

There were a lot of issues on the table.  Its program, “A Call for Economic Justice,” sought guaranteed employment at a living wage, universal health care, and public education reform, among other things.i  Three years later, the Labor Party held its First Constitutional Convention to hammer out party policies.  In particular, the universal health-care campaign focused on the language around “a woman’s right to choose” and determined that such a system must be linked to a “full range of family planning and reproductive services.”ii  Some groups wanted abortion to be specifically rejected by the party; others wanted abortion to be specifically guaranteed. 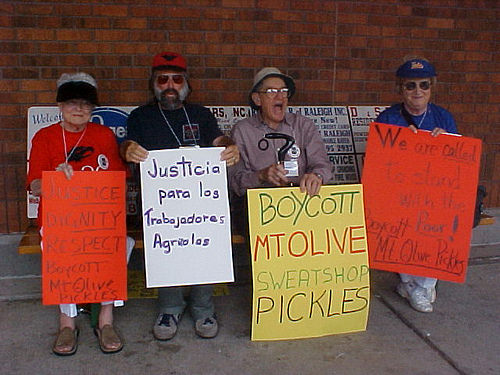 At last, Baldemar Velasquez addressed the convention.  He argued that while “he and his members believed that life began at conception …. building unity in the class struggle was more important.” iii

What does this do for religion?  According to the Pew Research Center, nearly one-in-four Hispanic adults (24%) are now formerCatholics, leaving the Church in increasing numbers.iv Correlation may not imply causation but the US Catholic bureaucracy’s blind fellowship with unions, regardless of their moral positions – such as various bishops’ support of FLOCv – is scandalous…and scandal has consequences.

Rally Against Amendment One (IAF in disguise) 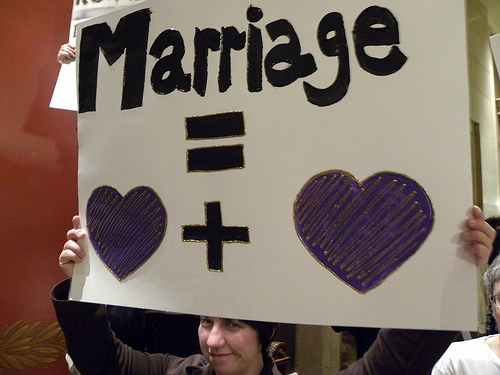 Another example comes from a North Carolina “Rally against Amendment One”, held more than a decade later. Amendment One would have made it unconstitutional for the State to recognize or perform same-sex marriages or civil unions but did not prohibit domestic partnerships.   Among the groups organizing the rally was the Pulpit Forum.

Pulpit Forum is a North Carolina affiliate of Interfaith Worker Justice, an Alinskyian network that brings together union leaders and clergy to advocate for workers issues.  It delivered a statement at the rally that was notable for its breezy abuse of religion.

The statement began by acknowledging that many of the affiliate members “hold to the traditional view of marriage between a man and a woman.” vi  However, it continued: “We oppose any attempt to legislate people into our particular faith convictions.  People have to come to faith out of heartfelt conviction, as free moral agents under God.” 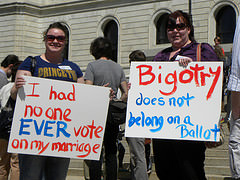 The Pulpit Forum statement isn’t really concerned about legislating “faith convictions.”  Its concerned about political clout: “We stand against the proposed marriage amendment because we see it as a sophisticated political tactic aimed at dividing minorities from each other to dilute voting strength among voters who are very concerned about jobs, healthcare, education, and justice for the most vulnerable of our citizens and those who would like to be citizens.”

Of course, another solution to such division might be for these minorities to rally behind traditional marriage.  Statistically, traditional, first marriages are more prosperous.vii  Its benefits for children – academically, physically, and psychologically – have been studied extensively.  “Children raised by their biological parents who are married and live together fare better than other children.”viii  Voters who are truly concerned about “jobs, healthcare, education, and justice for the most vulnerable of our citizens” would do well to consider the evidence.

Again, what does this do for religion?  According to another Pew Research Center study:

“[t]he Christian share of the U.S. population is declining, while the number of U.S. adults who do not identify with any organized religion is growing…. Moreover, these changes are taking place across the religious landscape, affecting all regions of the country and many demographic groups. While the drop in Christian affiliation is particularly pronounced among young adults, it is occurring among Americans of all ages. The same trends are seen among whites, blacks and Latinos; among both college graduates and adults with only a high school education; and among women as well as men.”

No, correlation isn’t causation but it isn’t irrelevant, either.

The political demands made on the Pulpit Forum clergy and on FLOC leadership pushed them to betray their (stated) religious values.

This is an interesting problem because faith-based progressive political forces insist that it’s their religious values that give them legitimacy:  “The mission of Interfaith Worker Justice,” says one, “is to call upon our religious values in order to educate, organize, and mobilize the U.S. religious community on issues and campaigns to improve wages, benefits, and working conditions for workers, and give voice to workers, especially workers in low-wage jobs.”ix

The problem is only going to get worse as political forces vie for the “faith vote” in upcoming elections.  The Republicans have a “GOP Faith” website (www.gop.com/groups/gop-faith) with a goal of building “an army of 100,000 pro-faith conservatives who will help us identify, register, inform and mobilize America’s faith-based community for the 2016 elections.”  The Democratic National Committee’s Faith Outreach “is housed within [its] Community Engagement Department, and is concentrating its 2015 efforts with …state parties and state-based allies as part of [an] overall effort to strengthen [its] work with the states. Inclusive within every constituent group relationship will be a faith component that will coordinate messaging and bolster … shared values as Democrats.”x

So long as religion informs politics, this would be a positive development.  When politics dictates to religion, however – as is usually the case – the result is a loss of faith along with an inevitable deterioration of civil society.

[ix] “Building an Affiliate: a Guide for Starting Out,” Interfaith Worker Justice, undated.

This article, Using Social Justice Alliances to Subvert Catholic Principles is a post from The Bellarmine Forum.
https://bellarmineforum.org/using-social-justice-alliances-to-subvert-catholic-principles/
Do not repost the entire article without written permission. Reasonable excerpts may be reposted so long as it is linked to this page.