In the opinion of this writer, one of the most evident marks of decline in the Church in the past 50 years has been the virtual non-existence of an authentic intellectual life in seminaries and among the episcopate. It doesn’t take a rocket scientist to chart the decline of the intellectual capacity of the clergy (and Catholic students in general) in the post-conciliar era, nor should it surprise us that, as a result of this decline, there is a corresponding decline in confident, decisive, and virtuous decision-making. The reasons for this may be many and I know my brief on the topic here will not cover all possible causes (Bishop Edward Scharfenberger analyzed it well.)  Likewise, I am not suggesting that every ordinand need to have the intellectual gifts of Aquinas and Liguori. What I am suggesting is that the life of the mind (or the acknowledgement of God’s great gift of the intellect and the proper conditions and tools in developing it) seems to have been sidelined as a priority to the formation of priests in this country since at least the 1960s. As such, priests, and therefore, the hierarchy are woefully inept at analyzing, discussing, and–most importantly–acting when something like the sexual abuse crisis demands their attention. At best, many members of the hierarchy are amiable dunces unable to decide and react to crises that demand leadership; at worst, they are well-schooled (experts, even) in modern, secular, political thinking–fitted only for this world, and not the world to come.

When did this intellectual crisis begin? Certainly, it has dogged us since the Fall, but Blessed Pius IX and St. Pius X diagnosed the modernist tendency that grew to maturity in the 19th and 20th centuries. Instead of forthrightly and confidently reaffirming their predecessors and the Doctors of the Church, Churchmen in the mid-20th century, by and large, pursued a policy of Ostpolitik with the modern world. In so doing, the basic intellectual girders upon which the edifice of Catholic thought was built began to suffer neglect. In a word, nothing was reinforced. Consider:

The windows were opened, but there was a miscalculation as to the effects of the plenitude of smokestacks outside the house. The fumes were recognized as noxious relatively early when Blessed Paul VI acknowledged that the “smoke of Satan” had entered the Church. St. John Paul II and Pope Benedict XVI did their best to reinforce the girders and we have their magisteria to support us in the current battles. However, with few exceptions in the hierarchy, it seems like most everyone else was, and has been, “high.”

The sickness has now reappeared with frightening effects. Sane-thinking Catholics should demand of the hierarchy an intellectual formation for the priests of the Church that is rooted in sound and perennial philosophy and not timed to the passing fads of the age. As the well-ordered working of both body and soul are to a healthy human person, so too are faith and reason to a proper and healthy intellect. With this, the conscience is then able to act in particular circumstances and have the confidence to act. As the McCarrick case has shown us (and, dare I say, the further uncovering of a predominantly “Lavender Hierarchy”), the bishops of the Catholic Church–from Rome on down–lack confidence to act as Christ would have them act; and this, because it is apparent that they sorely lack the intellectual chops required for a formed conscience. 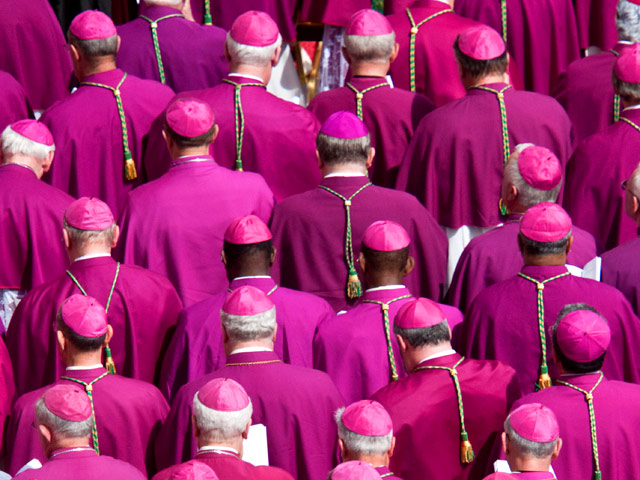 This article, Wanted: Intellectually Competent Bishops and Priests is a post from The Bellarmine Forum.
https://bellarmineforum.org/wanted-intellectually-competent-bishops-and-priests/
Do not repost the entire article without written permission. Reasonable excerpts may be reposted so long as it is linked to this page.