When the Pope Finds “Selfies” Inappropriate

The intellectually-challenged media loves to report on the Pope posing for “selfies,” but they ignore something more interesting. One of the things that has impressed me about His Holiness Pope Francis from the beginning of his Pontificate is the solemnity with which he celebrates the liturgies of the Church. It is a striking contrast from the previous two pontificates to see an entrance procession to Mass with a serious looking Pope; one who is studied in the way he does not greet the faithful who are cheering for him. Both Popes John Paul II and Benedict XVI would acknowledge the faithful on the way to the altar, blessing the faithful and stopping occasionally to kiss a small child. Noticeably different is Pope Francis. I noticed this last year during the Palm Sunday Mass. Likewise this year, we witnessed a very serious Pope as he entered into the mystery of Holy Week–he processed, eyes downcast, seriously considering the mystery. 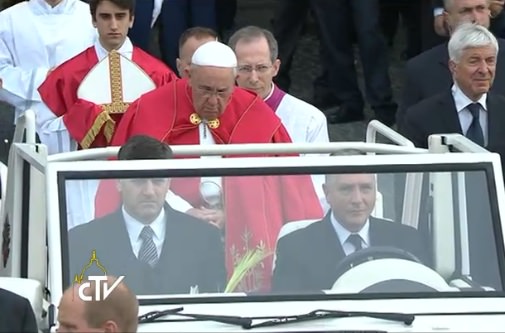 Just as Pope Benedict made very deliberate decisions in support of the proper celebration of the liturgy, so too it seems that Pope Francis is doing the same. In particular, he seems to be modeling for us the proper disposition as we approach the altar. When the Second Vatican Council called for active participation (actuosa participatio) of the faithful at Holy Mass, it echoed the call of Pope St. Pius X who said, “Don’t pray at Holy Mass, pray the Holy Mass.”  Actual participation regards most especially the uniting of one’s heart and mind to the Mystery. Saying things out loud is secondary. The Mass is worship par excellence–the most fitting worship to Almighty God. The Mass is not evangelization (though, admittedly, it may serve as such to individual hearts open to our Lord’s grace), but the basic requirement of justice that we owe God. It is where we enter the mystery–where we see Christ as Priest and Victim and where we unite ourselves also with the offering of Christ to the Father. The very person of the priest should recede into the background, because it is not the Pope or Father offering the Sacrifice at the altar, it is Christ. Likewise, we, the lay faithful, should recede into the background. The Mass is not the time for individual expression, for such risks elevating the creature rather than the Creator as the focus of worship (or at least distracts from the true focus). Solemnity in the presence of the Creator of the universe is what is necessary, not a crude, modern, so-called imitation of people in first century Jerusalem waving palm branches, throwing coats, or dancing before Christ. The latter is the essence of a “selfie,” not worship. 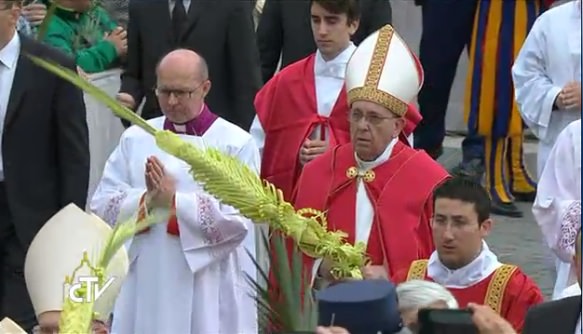 The solemnities of Holy Week offer us an opportunity to go out of ourselves and more fully enter the mystery of our salvation. By uniting our hearts and minds to the liturgy of the Church, let us join ourselves with the angels and saints in the true worship of Our Blessed Lord. Let us follow the Pope in keeping Christ the focus, that “He may increase and we may decrease.”

This article, When the Pope Finds “Selfies” Inappropriate is a post from The Bellarmine Forum.
https://bellarmineforum.org/when-the-pope-finds-selfies-inappropriate/
Do not repost the entire article without written permission. Reasonable excerpts may be reposted so long as it is linked to this page.