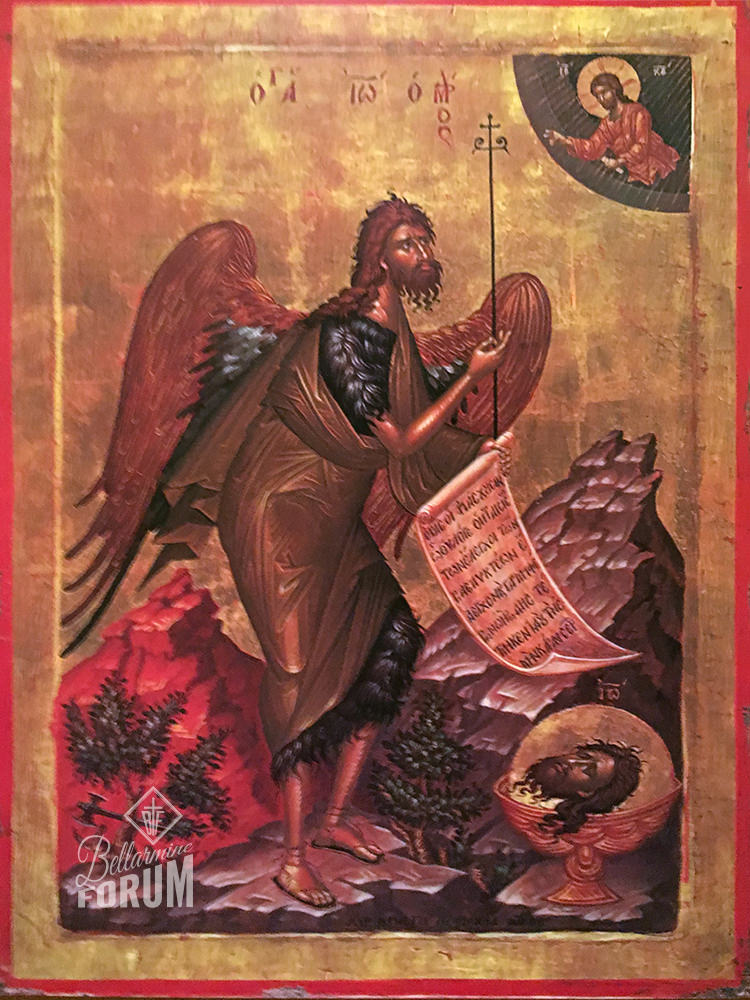 The icon of St. John the Baptist in the icon corner of my house.

Today is the feast of the Beheading of St. John the Baptist. All great eras have to come to a head — a pinnacle where all the threads of plot swirl in wild tempest to resolution. Of all the stories in the old testament, I think the end of John the Baptist is a lot like Our Lord’s, but it has all the day time drama elements that cap the Old Testament perfectly. You have the guy at the head of state power that has compromised by thinking with his loins do something stupid and get cornered into having someone killed.

It’s worse because Herod was thinking he was going to get lucky with his second wife’s daughter. Herod is a man that can’t get his head straight because he’s too wrapped up in getting it on. King David had that problem and later repented. And then you have Herod’s wife. She’s a treat. She twists Herod up into a web better than Jezebel. And the daughter had to know about her mother’s plan… but maybe she was angling to get her mother out of the way and use the state power for herself.

See what I mean? It’s like everything in the old testament wrapped up in a punctuation mark.

One guy had one thing to say:  Herod needed to repent. His second marriage was not a marriage. He got imprisoned and Herod thought that’d be the end of it, but his second wife wasn’t happy and put her plans and plots to action.

Pilate’s wife would warn Pilate to have nothing to do with Jesus and release Him. But Pilate wasn’t remarried. Herod’s illegitimate wife drove him to murder. But for what?

John was calling Herod to repent. He called out that marriage was between one man and one woman for so long as they live. Herod’s answer: 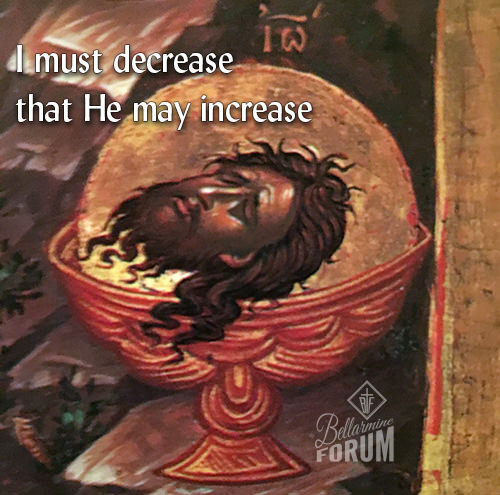 Should we expect to be treated any better than John the Baptist or Our Lord?

St. Thomas More had a situation similar to John the Baptist’s. And yes, he got the same earthly end. Today, we are faced with telling the world that God made marriage between one man, and one woman. There is no such thing as so-called same sex marriage. none.

What will they do to us?

About 250 years ago, Our Lady appeared in the French hillside to two young children and warned that France was going to suffer horridly if men do not repent. Why? She said it was because the mule drivers took Jesus’s name in vain, and people worked on Sunday.

Holy cow. If we are to be like John the Baptist, and call men to repent — look at the things we face today! When is the last time you reminded someone not to work on Sunday?

John was in prison a long time. We know he began to wonder when he sent his disciples to Our Lord to ask if He was the one or if John should look for another. Think about that question for a minute. John was not doubting his mission. Rather, he was trying to figure out if he had done what God asked. Jesus sends the best answer…   the blind see, the dumb speak, etc. In other words, John would know from that answer.

But the message for us is that so long as we do what God asks, the circumstances we find ourselves in are fine, even if in prison.

4. Our State Leaders Give Fake Tears, But will kill us anyway.

Pilate washed his hands. I’ve written that we memorialize Pilate in the Creed precisely as a reminder that the enemies of God will use state power to kill God’s people. Herod tried to act as if he was being moral in keeping a promise. (nevermind that this was an invalid thing to begin with). So his personal justification of himself was that he had no choice. Should we expect any better from leaders today?

John’s glory came when Our Lord proclaimed him to be the greatest born of woman. His Heavenly glory is great as well. Jesus’s choice of words are a direct reference to John’s famous axiom:  that he must decrease, in order that Our Lord might increase. Jesus in turn rewards John with the “greatest.”

Unlike marketing and sales talk today, when God says someone is the greatest…   all of Heaven responds.

We must follow and call people to repent. Tell them that Jesus is He who can heal the blindness in their lives, heal the dumbness they suffer, Jesus will make straight the crooked.

People need to hear it. The Herods, the Pilates, and all the others in your life. God wants you to proclaim the good news of the redeemer and the path they must take to meet Him:  repentance.

If you aren’t finding ways to tell people how to repent and find the Redeemer, then consider this:

Nobody is chopping our heads off — what will your excuse for being silent be?

This article, 5 Things to Consider on the Beheading of John the Baptist Compared to Today is a post from The Bellarmine Forum.
https://bellarmineforum.org/5-things-consider-beheading-john-baptist-compared-today/
Do not repost the entire article without written permission. Reasonable excerpts may be reposted so long as it is linked to this page.