“A Steady and Invigorating Catholic Light” 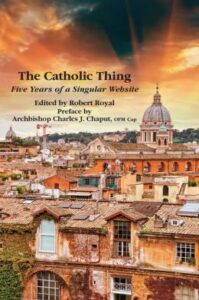 The blogging age has unwittingly renewed an old thing: book writing by serial installments. The website known as The Catholic Thing has raised the bar in both blogging and books by publishing a collection of essays that have appeared on its site over the first five years of its existence. The title is true: The Catholic Thing is a singular website. It is no mere blog, arguably no blog at all. The Catholic Thing publishes one essay a day by formidable Catholic intellects. In assembling a book covering the website’s first five years, editor Robert Royal, president of the Faith & Reason Institute, likely had some 1500 gems from which to choose, and it is a collection of about a hundred of them.

Some of our well-wishers have asked whether there is a need for yet another online publication. We believe there is. A lot of good Catholic material appears on the web, some that is not so good. But we expect that you will not find anything quite like the quality, experience, and accessibility of The Catholic Thing. All of our columnists write frequently in other places, but there is no one place where you will find them all together offering material unavailable elsewhere. Wide-ranging and solid Catholic commentary on events is necessary, not only to keep us from being overwhelmed by the tsunami of information now coming at us all from many sources, but to cast a steady and invigorating Catholic light on what is otherwise a superficial and dull world.

Royal’s words five years ago proved prophetic. There is no other source for such accessible and excellent Catholic commentary. Other sites prove insightful once in a while, but TCT produces excellence nearly every day, and the book collects the best of the best.

While the site ranges and roams, sometimes addressing current events, sometimes addressing eternal truths, the book groups its collection in seven sections: Fundamental Things, Catholica, Controversies, Church and Culture, Conversions and Conversations, Personal Portraits, and an Appendix that pieces together tributes and commentaries on eight recently departed souls, including one of TCT’s own editors and contributors, Ralph McInerny, whose essay, “Implicit Philosophy” opens the volume. This essay and its nine companion essays on “fundamental things” offer a strong opening and foundation for what follows, often refuting atheists and other heretics along the way. The chapter frames the remainder, and the reader that cannot agree with these arguments would waste his time to read the rest.

For those that forge ahead, the book is a cornucopia of fine thought and commentary on both the passing and the eternal. Despite the obvious Catholic label, both the book and website avoid the campiness of tireless, saccharine piety that can afflict some sources in Catholic media. The content is approachable without being reduced to formalism, a subject itself tackled by Randall Smith’s essay, “Faith Is Not a Checklist.” Perhaps more importantly, despite a roster of contributors that is heavy with academics, these essays are not the stiff, stilted stuff of academic papers. Most of these essays reach out to grab Joe Layman, and even Jane Heretic and John Atheist, by the lapels and give him or her a solid dose of Truth—sometimes shocking, sometimes subtle, but usually inviting. Indeed, many of the essays shine by giving readers a look behind the doors of the ivory tower without the condescending tone common in such efforts and also without watering down or simplifying doctrinal content. TCT aims at the wide middle, that species known, in the H. L. Mencken phrase oft-repeated by Professor Charlie Rice, as “Boobus Americanus,” and it hits the mark over and over again (the present author being a common example of the species). Professor Aaron Urbanczyck of Aquinas College likely speaks for his compatriot contributors: “The university is only coherent insofar as each distinct discipline is understood to be a lens through which the human person can perceive truth and reality.”

While TCT brings philosophy to the common man, it also excels in adding a needed voice of clear thinking and depth to current events and controversial topics. This is faith in practice. As Robert Royal put it, “real charity exists where we respect truth.” Importantly, TCT succeeds in delivering truth without being preachy or hypocritical—sin is a frequent topic, and insights are practical for spiritual development. Anthony Esolen’s “A Callus on the Soul” is a great exemplar. He observes that prurient sin raises a callus on the soul. Never satisfied, lust leads quickly to contempt. “I don’t like writing about evils,” he says, “but somebody has to be honest about them.” His observation is too true. Too few of the too few who actually attend Mass with any regularity these days hear anything like what is on offer in TCT, especially solid teaching about basic philosophy, Catholic doctrine, sin, and even current events. Relatedly, several priests are among TCT’s contributors, but the only episcopal offering in the collection is Archbishop Chaput’s preface. It is not clear if this is by accident or design, but whatever the case, it is a shortcoming.

The only other fault of the book is the lack of dates on the essays. This is especially frustrating where essays allude to current events. Fortunately, the website has fairly robust searching capabilities, so these omissions can be overcome, but dates would have provided readers with some simple and useful temporal context.

I have recently become highly selective in choosing online content on which I will spend any regular time, and The Catholic Thing is one of about a half-dozen websites that has made the cut. It is a worthy addition to anyone’s reading list, and the new reader would do well to read this book as a succinct summary of what he has missed.

Daniel J. Kelly and his wife live in the Twin Cities and are the proud parents of three children. Dan is an attorney and serves on the boards of Chesterton Academy and The Catholic Servant.

This article, “A Steady and Invigorating Catholic Light” is a post from The Bellarmine Forum.
https://bellarmineforum.org/a-steady-and-invigorating-catholic-light/
Do not repost the entire article without written permission. Reasonable excerpts may be reposted so long as it is linked to this page.