There is an old anecdote that, in one form or another, could be uttered by Catholic school students of a certain generation. It is the old story of Sr. Mary telling her second graders that:

“If God stopped thinking about you even for a second, you would cease to exist.”

I know that I’ve heard variations on this story for many years and I’m sure that there are several different expressions of it in other contexts. But summed up is one of the most profound existential and theological truths that one can hold. Indeed, second graders, far from not being able to understand the profound truth that it expresses, are the first and most intellectually open to these truths. I wish that I could say that second graders in most Catholic schools today could hear such common sense, but alas, the Catholic school system by and large has committed intellectual suicide. As Belloc once said, “the more we are of this world…the further are we drifting from the shores of the Blessed.”

Experience over the last 40 years has borne this out: the listlessness of Catholic school 8th graders at their Confirmation Masses, the inability of high school students to state with conviction that an unborn child is a child or that Jesus actually rose from the dead, or the profound ignorance of Catholic college students as to the basic tenets of the Creed or that grass is green. This pervasive ignorance and apathy is largely not the fault of these students. While it involves a combination of factors and, perhaps, experiences (that may be as numerous as the students we are speaking of), we can certainly speak to the role of the Church and her schools and the abysmal failure they have been over the last forty years–the smiles of her educational leaders notwithstanding. But why are they smiling? By what standard do the educational leaders of the Church measure the success of their schools?

Today we hear clarion calls by Archbishops and Bishops in the United States to defend the Faith and the need to love the Faith especially in the midst of a hostile federal government and aggressive secularism. Unfortunately, many of the faithful in this country are not in a position to do either, largely because they have never been taught to think as the Church does. Immersed in a culture and an educational system that professes the creed of “what you see is what you get,” how can the bishops expect Catholics in this country to defend the truths of the Faith or the Church? True, there are people of goodwill who will heed the call of the bishops to love and defend the faith; but without the proper understanding of reality, I suspect that many will neither be able to love, nor defend, that precious gift. 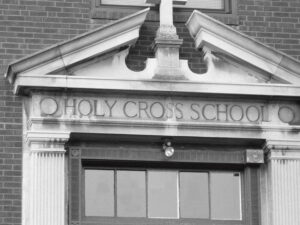 I am not suggesting that the bishops not call us to love and defend the Faith, but that the bishops themselves should also do so by doing the hard work of reforming their Catholic schools. Thus, helping to equip new generations of Catholics to know the Faith and defend it. While bishops rarely offer explicit excuses why they cannot reform their schools, we know from experience the subtle excuses offered or the “punting” when a tough question comes from a concerned parent. Reliance on the diocesan education office is de rigueur. Generally, however, the diocesan education office is often populated with “education experts” who—trained in the dominant Dewey-inspired philosophy of most university education departments—offer what can only be described as a parroting of educational fads (e.g., iPads for every student) or secular-sounding marketing initiatives (e.g., “Aim Higher”). Rarely will theirs be a philosophy steeped in that which is. Their focus generally tends towards the pragmatic, the utilitarian, and what can be measured by this-worldly standards (see our own Stephanie Block’s “Explaining Common Core”). Given these realities, it seems that the official Church in the United States is more concerned with fitting in with the turba delirantium (the education professionals) than the turba sanctorum (the communion of saints); with receiving accolades from secular accreditors than the Eternal Accreditor. Is this another example of the Americanist heresy—the desire to fit in, to show that we are good citizens of, in this case, the reigning educational polity? Indeed, Chesterton nailed it when he diagnosed the problem of modern education as “standardization by a low standard.”

So where have the Catholic schools failed? The Father of Lies is most subtle. In the great secular movements of the modern world, we have seen the public philosophy shift from one that acknowledged the supernatural and the mysterious workings of Providence to one that is not so much hostile as dismissive or apathetic. Indeed, this public philosophy has affected our laws and our educational institutions. If the public philosophy of the West has become secular, individualistic and materialistic, can we expect that the philosophy of government schools won’t? That the education departments of major universities won’t? Can we expect that Catholics of goodwill, not steeped in their own tradition or the tradition of the philosophia perennis, would be saavy to the new paradigm?

Squarely against this, notwithstanding her members, stands the Church speaking the truth of reality: that the wholeness of reality is that which is seen and that which is unseen; that the world is surrounded and protected by angels, that demons deceive us, that (sometimes) trees talk, that water turns into wine and that bread becomes the flesh of God; that a human person is composed of a body and a soul–whose workings and movements are so mysterious that it defies any dismissive labeling of a sexual preference or race; that the same human person yearns for fulfillment, for happiness and that he will only find glimpses of this happiness on this earth. Finally, as Sr. Mary told her second graders, that the same human person is so beloved by his Creator that He can’t stop thinking about him—so loved that the Creator’s very thought keeps that human person in existence. And, finally, that the Creator continually enters time and breaks through the bonds of nature to bring His beloved to supernature—on the steps of the altar.

Teaching children to recognize this is the duty and mission of the Catholic school.

This article, Catholic Schools–What’s the Point? is a post from The Bellarmine Forum.
https://bellarmineforum.org/catholic-schools-whats-the-point/
Do not repost the entire article without written permission. Reasonable excerpts may be reposted so long as it is linked to this page.