In 2011, I examined the disturbing relationship between Alinskyian community organizing and the fomenting civic unrest incarnated in the Occupy Wall Street Movement and its allied anti-banking efforts such as Showdown on Wall Street” or the “New Bottom Line.” (1)] The Alinskyian community organizations involved were the usual suspects: Interfaith Worker Justice, National People’s Action (NPA) affiliates, USAction, the PICO network, the Alliance for a Just Society, ACORN (now operating under new names), the Industrial Areas Foundation of the Southeast (IAF-SE), and Gamaliel affiliates.

The organized roots of this movement, however, go deeper. Last year, Stephen K. Bannon directed and produced a documentary, “Occupy Unmasked,” to explain that the Occupy movement was a “convergence of leftist groups” supported by a left-wing media that took “control of the narrative.” The images captured by the film maker portray a core of manipulative activists who deliberately set about to generate an amorphous, undefined series of related protests in cities around the United States for the purpose of forwarding a socialist movement. It can be viewed through Netflix.com. 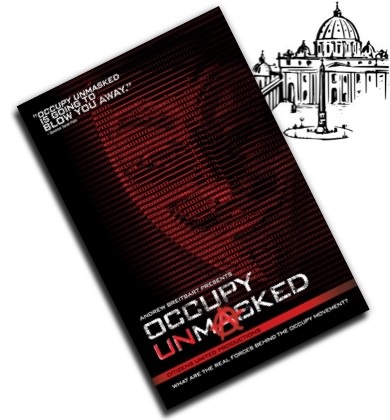 Not quite a year since its release, it’s interesting to read the “narrative” of the left-wing media as it “manages” the film’s message. The Nation dismissed it as a product of “right-wing imagination,” superciliously mocking the notion that the Occupy Movement was an “elaborate front for the Obama re-election effort…” which wasn’t one of the film’s points. There was, however, footage that showed Obama, Pelosi, and others supporting the movement, which is quite another matter.

Progressive Radio Network, which carries a show called Occupy the Hood – an “extension” of the Occupy Wall Street movement among “people of color” that continues – was more honest. After peppering the documentary with expletives, the talk host said that, as someone with first-hand knowledge, it contained a mixture of truth and distortion. Perhaps Occupy had been orchestrated by leftist radicals to create chaos but, so what? “Everybody is full of sh*t….who cares? …everything the government and the big corporations are doing, slaughtering of people, mind control…is orchestrated as well.” (4)

Is it a perfect documentary? No. Violent images are repeated, again and again, for “effect.” Interviewees and activists weren’t always well-identified. The footage is limited to the larger and more “colorful” Occupy actions, ignoring those that were small and peaceful.

However, the main point of this work – that the Occupy Movement was, to a large degree, orchestrated by people with strong, anti-capitalist intentions, was well made …as was the corollary point that those intentions, coupled with anarchy, are dangerous. Writing from the perspective of a year after the unrest, those points remain fresh. Unfortunately.

Visit the main Occupy Wall Street website: occupywallst.org. The news on it is current and global. The post concerning Tunisia’s “Disobedience Movement” (7-6-13) discusses “the failures of the revolutionary movement to achieve lasting, material change in people’s everyday lives.” To address this, Tunisians must struggle “to create a new economic and social system that breaks with capitalism and all existing economic mechanisms based on profit and competition” and show “[m]ilitance against the authoritarian State apparatus and its hierarchical structures no matter the form it takes, whether liberal democratic or fascist/totalitarian, theological, or progressive.” The entry isn’t describing radical jihadists but “comrades.”

The July 4th post concerned an Occupy action in Chicago, where protesters targeted Mayor Emanuel Rahm’s house, opposing “budget cuts to public services, and policies of corporate welfare.” July 3rd covered a “Global March to Dignity – Transnational Solidarity Weekend” in Turkey, Greece, Brazil, Bulgaria, Egypt. “Once more the fire of the global revolution is sweeping out the entire planet. We are taking streets, squares, parks in millions and revolting against the police brutality, torture, environmental destruction, corruption, the looting of the commons by the 1%. ….A new civilisation [sic, British spelling] is emerging out of joy, fun, fight, pain and blood.” July 7th will be the monthly Global People’s Assembly in Liberty Plaza (New York) “to learn about the uprisings in Turkey, Greece and Brazil. Let’s hear report-backs from these locations, share stories, chants and tactics, and stand in Solidarity with one another! …. Bring your projects! Bring your art! Bring your spirit! All our struggles are connected.”
But one can visit related groups and read similar messages. A website called Capitalism Is Over! If You Want It identifies itself as linked to Occupy Wall Street “in response to the need for a fundamental shift in our approach to Capitalism and the negative impact it has on the environment, health, and wellbeing of all. The status quo is not sustainable. The title of the project references John and Yoko’s “War is Over if You Want It” campaign of the late ’60′s – in the spirit that capitalism is our war of today. The title also reflects how these phenomena are based in our minds and rely on our buy-in to function. Capitalism is not a law of nature. Humans created the system, it no longer works for the majority of the world, and it can be replaced.” (5)
In other words, the revolution isn’t over. Not by a long shot.

1. See, for example, “What Is the Catholic Campaign for Human Development Trying to Do? Did you say you want a revolution?” ; or
“Where Catholic Money Goes to Anti-Catholic Places”
2. Michael Tracey, “’Occupy Unmasked’—Unmasked: The documentary, starring the late Andrew Breitbart, is a deranged hodge-podge of bizarre memes, wild dot-connecting and unadulterated fury,” The Nation, 10-9-12
3. Chris Faraone, “Defacing ‘Occupy Unmasked’ – Andrew Breitbart’s Final Opus is a Steaming Pile of Propaganda,” The Phoenix, 9-2-12.
4. Malik Rhasaan, “Occupy The Hood/Preach da Truth” podcast, 11-29-12
5. Capitalism Is Over If You Want It: capitalismisover.com

This article, Film Review: Occupy Unmasked – Looking at the organized roots of “Occupy Wall Street” is a post from The Bellarmine Forum.
https://bellarmineforum.org/film-review-occupy-unmasked-looking-at-the-organized-roots-of-occupy-wall-street/
Do not repost the entire article without written permission. Reasonable excerpts may be reposted so long as it is linked to this page.