The Catholic Campaign for Human Development (CCHD), an annual collection that is touted to “help the poor” but has actually been a steady source of revenue for Alinskyian organizing and other progressive, political activity, recently released its 2014-2015 grant list. It’s a doozy.

As has been the trend since scandal forced the collection to withhold funding from the now-defunct (rebranded, actually) ACORN, CCHD has increased the percentage of its pie to the Alinskyian community organizing efforts. The current year shows about 49% ($4,514,000) going into such projects overall, broken down as follows: 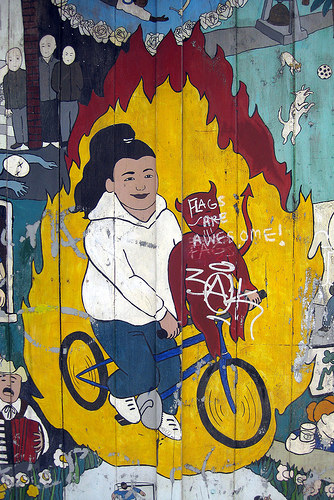 Riding with the Devil

A caveat: these figures are conservative. The affiliates of these various organizing networks are in constant flux, changing their names, developing new organizations, and receiving funding under project titles. A few are not affiliates but connect to the larger network through training. It’s laborious to identify all the complex, interlaced connections among these groups and their locals. Therefore the above figures must be understood as an approximate reflection of the CCHD’s spending patterns.

But the diocesan director of Catholic Charities of Buffalo is also the diocesan director of CCHD who oversees local CCHD-funded organizations.1 This is also true in the Diocese of Springfield Diocese of Springfield, MA, where the Director Catholic Charities – which received $50,000 grant – also directs the CCHD. Catholic Charities of the Diocese of Metuchen, which received a $55,000 grant, is also the coordinating body for the local CCHD, evaluating, monitoring, funding and assisting “community-based organizations who have submitted proposals of grass-roots community organizing and anti-poverty initiatives”. 2

CCHD grants appear to be fungible.

Looking at the Local Picture – CAFÉ

In the months ahead, we will look more closely at some of CCHD’s grants, demonstrating CCHD’s unwavering commitment to progressive political activism, despite that path’s support of abortion, same-sex marriage, and increased government control of education and the workforce.

CAFÉ has proved so disturbing to some Las Cruceans that there is a website called “Close the CAFÉ” that is devoted to exposing its seedier aspects.3

FROM THE MOUTHS OF CAFÉ’S LEADERSHIP

Objections to CAFÉ fall into several categories. The most disturbing is that its staff is, or has been, associated with activism that violates Catholic social teachings. Sarah Nolan, CAFÉ’s executive director, was an organizer for PICO’s San Francisco Organizing Project for five years during a period when SFOP was pushing the pro-abortion Healthy San Francisco and Healthy Kids programs.4

Rabbi Larry Karol, chair of CAFÉ’s 2014 board of directors is

“amazed that some people still don’t understand what it means to give Americans freedom to make their own decisions according to their own conscience or their beliefs. The year 2012 alone saw 43 state laws restricting abortion access through the imposition of complex and unnecessary requirements, including mandatory waiting periods and counseling, stricter parental notification guidelines that replaced already-strict rules, invasive ultrasounds, and onerous (and medically superfluous) clinic requirements. .. Because of my tradition, I am required to declare over and over that any public policy defining personhood as beginning at conception stands against my belief.”5 (emphasis added)

That’s quite a board!

That said, CAFÉ’s activism isn’t directed toward abortion or same-sex marriage. It’s directed toward raising the minimum wage, gun control, and liberal immigration policy. To achieve these ends, it cultivates progressive political allies – such as Joanne Ferrary who, with her husband Rick, “worked for CAFÉ for a few years, lobbying in Santa Fe on behalf of the minimum wage campaign.”11 Joanne Ferrary ran for New Mexico District 37 House of Representatives in 2014 and, for her campaign, received $1000 from late-term abortionist, Dr. Curtis Boyd and $2000 from the pro-abortion Emily’s List.12 Blessedly, she lost.

But it was a close vote and is probably not the end of Ferrary’s political ambitions.

Two other CAFÉ-allied political candidates identified by “Close the CAFÉ” are Beth Bardwell and MariaElena Johnson. Bardwell, who sought election to county commissioner, wrote a letter stating that: “Comprehensive sex education should be available to all adolescents. While prevention is key, abortion is basic health care for women. Any woman wanting to have an abortion should be able to have one safely and with dignity.”13

MariaElena Johnson, who received $2000 from Emily’s List14 while running as Democratic Candidate for New Mexico House District 53 “collaborated with state wide organizations and other CAFÉ community leaders in organizing multiple actions, lobbying efforts, and engaging youth in civic participation.15 Johnson and Bardwell also lost their campaigns but that’s beside the point.

Does this mean that CAFÉ is incapable of doing any good?

That’s the wrong question to ask.

The fact is that the people who run CAFÉ operate within a network of political and social activity that doesn’t serve the common good, that doesn’t understand what it means to uphold the dignity of all people, and that fosters a culture of death through its alliances. It doesn’t operate from the perspective of Catholic social teaching but – at best – from an indifferent secular perspective.

The correct question is: what possible reason is there to give these people money? 

This article, CCHD 2014-2015 …with a sobering look at a New Mexico PICO grantee, CAFÉ is a post from The Bellarmine Forum.
https://bellarmineforum.org/cchd-2014-2015-with-a-sobering-look-at-a-new-mexico-pico-grantee-cafe/
Do not repost the entire article without written permission. Reasonable excerpts may be reposted so long as it is linked to this page.