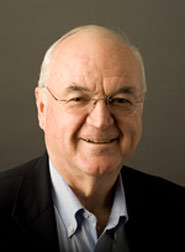 Years and years ago, I remember listening to Bill Marra and Fr. Micelli talk on the Catholic shows they did, and frequently they’d discuss Fr. McBrien and nearly every time the topic of his work came up, they’d compare the past of Notre Dame to what it had become. I miss those kinds of guys, with accents and colorable phraseology flourishing solid lines of reason.  They certainly flavored how I understand post-modern modernist theologians like McBrien. Fr. McBrien’s work was usually discussed in the terms of what happened post-Vatican II when the modernists that had been hiding in the shadow of their suppression stormed out with a coup on the general Catholic population. I remember one work in particular, McBrien’s What We Really Believe, because I once had read this book to see what everyone was talking about who criticized it.

One thing stands out in my memory of that book:  McBrien had said that on a trip to the holy land, his tour guide pointed out to them that the spot they were on was the same where Jesus had ascended to Heaven. McBrien said of it that he had to hold his side to stop from laughing. (!) Yes, not just on this point, but on many others, McBrien had a way of being embarrassed by the historical facts of the Church. He was one of those theologians that might have thought that the marxist scientists had a point when they reported that the first astronaut sent to space by Russia took a telescope and looked, but could not see God. McBrien was embarrassed by things like that. All modernists are.

No doubt, he was prolific nonetheless, the reports from Notre Dame today are accurate to say this:

One of the most widely quoted members of the Notre Dame faculty, Father McBrien regularly provided print and broadcast media outlets with commentary on all matters related to the Catholic Church.

Father McBrien was a past president of the Catholic Theological Society of America and a recipient of its John Courtney Murray Award for “outstanding and distinguished achievement in theology.”

I’d like point out that in addition to printing in a published book that he wanted to guffaw that Jesus ascended physically into Heaven, he was also embarrassed by the notion of the resurrection of the dead, and — may God forgive him — he had trouble with the Real Presence of Jesus Christ in the Eucharist. When discussing Perpetual Adoration, McBrien found it necessary to point out that he was too advanced for Eucharistic Adoration — (did he evolve beyond being with Our Lord in person?) Here is is pretty plain condemnation of the devotion of Eucharistic Adoration (c.f. Fulton Sheen and Fr. Hardon regularly praised the devotion as a rich source of grace):

Notwithstanding Pope Benedict XVI’s personal endorsement of eucharistic adoration and the sporadic restoration of the practice in the archdiocese of Boston and elsewhere, it is difficult to speak favorably about the devotion today.

Now that most Catholics are literate and even well-educated, the Mass is in the language of the people (i.e, the vernacular), and its rituals are relatively easy to understand and follow, there is little or no need for extraneous eucharistic devotions. The Mass itself provides all that a Catholic needs sacramentally and spiritually.

Eucharistic adoration, perpetual or not, is a doctrinal, theological, and spiritual step backward, not forward.

Let’s not forget that back in the 90s, the Holy See apologized to us lay faithful for the decades of error taught. Apparently, Fr. McBrien was too smart to know what that meant.

I feel badly for Fr. McBrien. Seriously. The Gospels are literal: Jesus ascended into Heaven. That means his body went up into the air. Similarly, Jesus and His Apostles are literal: that is the Real Presence of Jesus Christ in the Blessed Sacrament.  Fr. McBrien was embarrassed about those things — and whether intentionally or not, was a large player in AmChurch and the fall of faith to modernism in America.

These beliefs embarrassed Fr. McBrien, and made him want to laugh. Now that he needs a resurrection himself and his only route to get that is in the real presence of Jesus, I wonder who’s laughing now.

I certainly hope he swallowed his embarrassment, took a good accurate account of his life and followed the time honored steps towards a happy death. There’s a lot of problems he was going to face when he got to see Jessus face to face, though. May God grant mercy to him.

This article, Who is Laughing Now? R.I.P. Rev. Richard P. McBrien is a post from The Bellarmine Forum.
https://bellarmineforum.org/who-is-laughing-now-r-i-p-rev-richard-p-mcbrien/
Do not repost the entire article without written permission. Reasonable excerpts may be reposted so long as it is linked to this page.