Ed. Note. In this 2005 article authored by WFF President Charles E. Rice, he suggests to Notre Dame students and to all of us a new approach in considering Christmas. In the face of the secularization that continues to get worse with each passing year and in the midst of an increasingly hostile federal government to the Catholic Church, considering the reality of Christmas is a first step in maintaining the tradition and faith in our families. The WFF thanks St. Augustine’s Press for granting permission to reprint select articles collected in Professor Rice’s upcoming publication Right or Wrong?

As we move into December, how do we handle Christmas? If you are an American Civil Liberties Union lawyer, you might sue some school teacher who tells her kids ‘Merry Christmas’ instead of ‘Happy Winter Solstice.’ The Supreme Court’s edicts in this area serve mainly to confuse to and drain the ‘holiday’ of any meaning. Maybe we ought to consider a different approach.

One approach might be to reflect on Christmas as history, an event involving real persons who can teach us a thing or two about how we should live in the 21st century. First among those characters of Christmas is Christ, who is now the target of a judicial and cultural white-out campaign against even the mention of his name. But for two millennia, Christmas has been a feast of hope and joy because of who that Child is and what he came on earth to do. Red and green, the Christmas colors, are the colors of life and blood. Christmas commemorates the birth of a Redeemer who restored our supernatural life by his passion, death and resurrection.

The red of Christmas could also remind us not only of Calvary but also of the Holy Innocents. ‘Then Herod, seeing that he had been tricked by the Magi… sent and slew all the boys in Bethlehem and all its neighborhood who were two years old or under.’ (Matt 2:16).

Herod commanded the Magi to tell him the Child’s whereabouts so he could ‘go and worship Him.’ Herod, who wanted to murder the Child, was the first, but not the last, lying politician of the Christian era. In the first church-state conflict of that era, the Magi defied his order and Herod responded with the wholesale murder of the helpless. Herod is an important figure in the Christmas event. But Herod was a piker. The abortionists, and practitioners of euthanasia and those who license them to kill, are the Herods of our day. Today, the state sanctions and encourages the murder of millions of babies each year. And now we are moving on to the killing of the disabled and other ‘useless eaters.’

The New England Journal of Medicine recently disclosed a new test that can reveal weeks earlier than conventional screening whether a mother is carrying a child with Down syndrome. Columnist Patricia Bauer, in the Washington Post on Nov. 8 [2005], described how Margaret, her Down syndrome child, ‘enriches our lives.’ ‘In ancient Greece,’ says Bauer, ‘babies with disabilities were left out in the elements to die. We in America rely on genetic testing to make our selections in private, but the effect on society is the same. Margaret’s old pediatrician tells me that years ago he used to have a steady stream of patients with Down syndrome. Not anymore. [T]hey aren’t being born anymore.’

A more noble model than Herod, of course, was Joseph who ‘arose, and took the Child and His Mother by night, and withdrew into Egypt.’ Joseph, like the Magi, defied the tyrant. He was a strong guy and no wimp. He practiced civil disobedience as a conscientious objector.

So Christmas has a rich cast of characters, including Christ above all. Christ is a victim of cultural amnesia today. But he is not the only one. Archbishop Fulton Sheen said, ‘some of us may forget just how the Child came into the world; [some] speak of the Babe but never a word about the Mother of the Babe. The Babe of Bethlehem did not fall from the heavens into a bed of straw, but came into this world through the great portals of the flesh. Sons are inseparable from mothers, and mothers inseparable from sons. Just as you cannot go to a statue of a mother holding a babe and cut away the mother, leaving the babe suspended in mid-air, neither can you cleave away the Mother from the Babe of Bethlehem. He was not suspended mid-air in history, but like all other babes, came into the world by and through His Mother.

On his arrival at the Cologne airport for World Youth Day, Pope Benedict XVI prayed, ‘May the Virgin Mary, who presented the Child Jesus to the Magi when they arrived in Bethlehem to worship the Saviour, continue to intercede for us.’ We can count on her to do that. And she can help us to remember that, the ACLU notwithstanding, Christmas is a real event with real people. 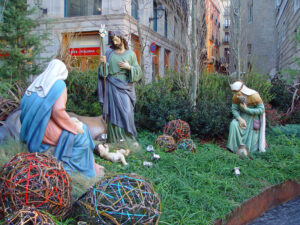 This article, Christmas as Real History is a post from The Bellarmine Forum.
https://bellarmineforum.org/christmas-as-real-history/
Do not repost the entire article without written permission. Reasonable excerpts may be reposted so long as it is linked to this page.