The Empire Builder (or, What I Saw on the Train)

Trains and Christmas go together. It has been so—at least in the United States—since the early part of the 20th century. It is not unusual to see a train encircling the Christmas tree, or to read a Christmas story or watch a Christmas movie with people traveling by train. There is a certain romance bound up with travel by train, not least of which is the thought of family and friends who live far away coming together for the holidays. Yet, I think there is more to it.  A consideration of a train ride in all its aspects is a window into the great realities and mysteries of life.

Several colleagues and I recently took a number of high school seniors from St. Paul to Chicago via “the Empire Builder”—the Amtrak train between the two cities. The purpose of our trip was to immerse our students in Catholic culture through music, liturgy, and several intellectual discourses, the highlight being a private meeting with His Eminence Francis Cardinal George. Traveling by train during the lead up to the holiday season evokes a certain charm. People seemed to be in a good mood, the air was crisp and cold outside, and the landscape that we passed through was in the throes of winter. In many ways, train travel today is much like it was when Agatha Christie wrote Murder on the Orient Express. There are sleeper cars, a club car, the dining car, and economy coach seating. The people on the train are a microcosm of society: young, old, rich, poor, people of faith, people of no faith, beautiful people, ugly people, people who wear Old Spice and those who never heard of it outside of the kitchen. Several individuals caught my eye.

Early on in the trip,  I made my way into the club car. There were several people relaxing and taking in Minnesota-Wisconsin landscape as we rolled along the track. I noticed one young man, probably no more than 22 years old, long-haired and dressed in what would be considered the uniform of the “grunge” crowd. I noticed that he pensively looked out the window and then turned to an open notebook in which he would occasionally scribble something. Next to him was a book: Sartre’s Nausea. He would flip through the book, read something, and continue his pensive watch. Several hours later, my colleague Mike and I sat down to lunch in the dining car with two travelers from British Columbia. They were on their way to Washington, D.C. for a medical device conference. An interesting pair, they seemed to be in their early sixties and had an air of Sixties’ idealism. While they argued for common sense and local solutions to political problems they seemed unduly enamored of a federal government-run healthcare system. To say the least, it was an interesting conversation.

On the way back from Chicago, I was struck by several other travelers. First, there was a sizeable contingent of Amish folks. (An interesting site for a train.) Sober and plain, one could tell immediately that these were good and honest people. The juxtaposition between these people actually engaging in conversation with one another and those looking at some handheld screen showed the former to be rather refreshing and certainly more human. Amidst the Amish contingent, there was one young man who seemed to want “to push the envelope.” He was sporting a pair of Oakley sunglasses on his broad-brimmed hat. A bit out of place. This same young man was not conversing with the other Amish men, but was in the lower level of the club car speaking with a rough-looking female and male. Both obviously were getting increasingly intoxicated throughout the trip. Rather unpleasant, they were rude not only to this young man but also to others who came into their purview. (The female was especially unfeminine.) Finally, there was an elderly gentleman that I noticed on the return trip who simply sat at one of the tables in the club car all night. I noticed that at one point he ate a ham and cheese sandwich and drank a cup of coffee. But for that, he simply sat all night. This was especially noticeable given the fact that our train was delayed  four hours due to an accident between the train ahead of us and a car. Unfortunately there was a fatality in that accident. The old man spoke only once, as I could see, when his cell phone rang and he said hello to his “honey-bunny.” The last time I saw him was about 2:30 in the morning as I was in and out of sleep looking out the window. He got off the train in Red Wing, MN. I saw his solitary figure make its way through the station in the still, cold, darkness of that early morning.

For all the spiritual and intellectual succor on that trip to Chicago, the train ride, in my mind, was the most poignant of all. There in nucleo was a snapshot of the world, of reality, of human life in all its goodness and frailty. Everyone on the train was traveling somewhere, seeking something, anticipating a final destination. Perhaps that is why a train reminds one of life and the eternal verities. Along the way, there are stops, delays, and frustrations. The joy of believing high school students or the pensiveness of the grunge philosopher may, in a way, reflect the struggle of young people trying to figure things out; asking the questions: Why am I here? Where am I going? What does it all mean? Similarly, like the Sixties couple, there are those with large hearts but soft heads; trying to do good, but perhaps, inadvertently, supporting something bad. The companionship and community of the Amish provide for themselves a measure of security and common purpose. The drunk couple are also seeking their happiness but are mistaken about what is truly good. Finally, the reflective old man in the club car, realizing he is nearing the end of his trip, stays awake and watches—lest he miss his stop and his beloved. This is life.

There is an appropriateness that this occurred in the days leading up to Christmas. It was among such people, and in such circumstances that the Creator of heaven and earth began His own earthly journey. He became incarnate to be with them on their journeys. He was surrounded by the simple and the wise, the young and the old, the rich and the poor, the sober and the drunk. There is some notion of this among the good people of Naples, Italy. While our group visited St. John Cantius in Chicago, we were shown the parish’s 18th century Neapolitan Creche. There are over 200 figures of individuals from every walk of life, to include the village drunk.  They all seek happiness and the fulfillment of their hearts’ desire. And in that, however long a time it takes for them to realize it or whatever delays or stops there are along the way, they approach the manger of Bethlehem, the newborn King, the real Empire Builder. 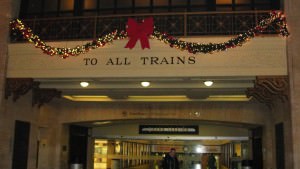 This article, The Empire Builder (or, What I Saw on the Train) is a post from The Bellarmine Forum.
https://bellarmineforum.org/the-empire-builder-or-what-i-saw-on-the-train/
Do not repost the entire article without written permission. Reasonable excerpts may be reposted so long as it is linked to this page.