The Church in 10 Years: Guitars, Speaking in Tongues, Women Priests?

I was listening to a sales person the other day and one thing they kept telling me to do is imagine my life down the road with this product. How much easier it would be to do this, and how fast I’d see results down, and just how great life would be. Infomercials do this a lot, too. In fact, I love watching infomercials because there is something magnetic about them. I don’t know why I need two corner dusting robots, but if I call now, I can get six of them for free!

For sales, that is very powerful persuasion. 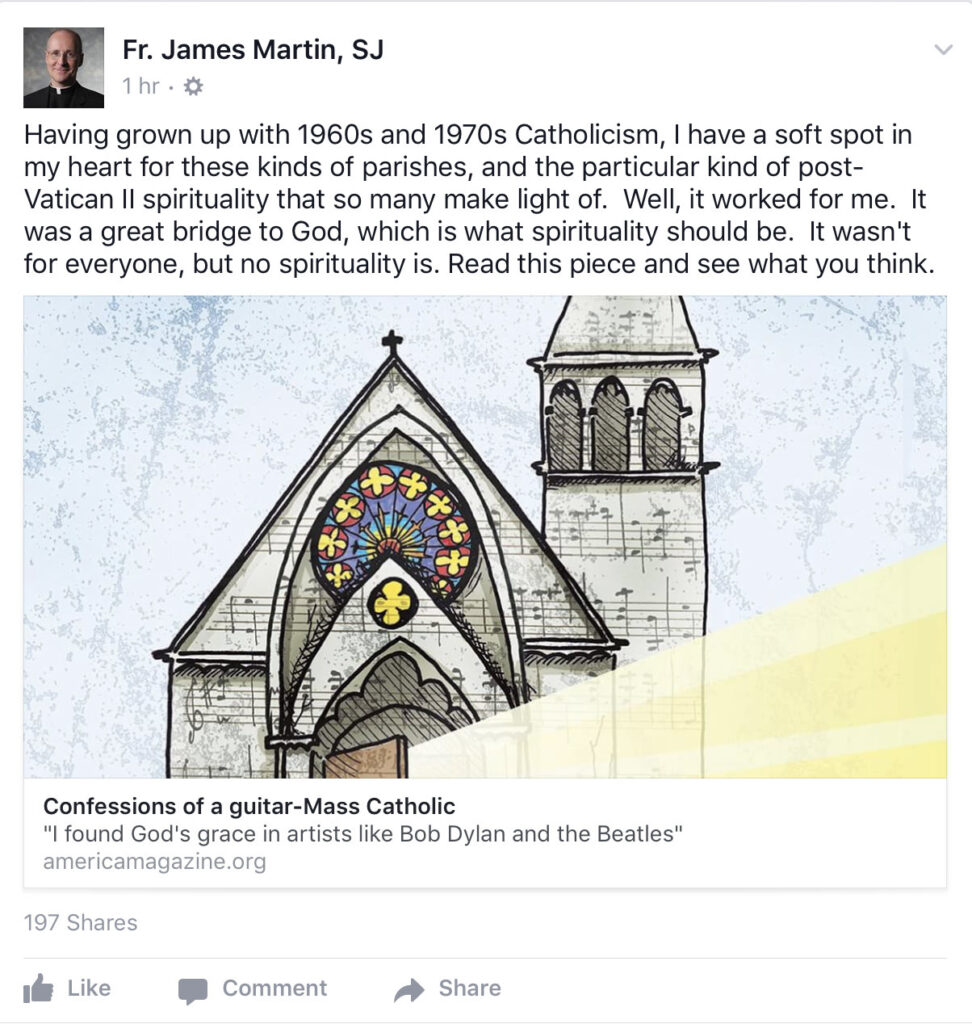 There is an emoticon/emoji of a face that is vomiting. I wanted to use that for my reaction, but I decided to try this instead:

My comment that guitar masses are the things of nightmares because they substitute campfires for worship of God.

It’s true — I was exposed to a “Gym Mass” with guitars and stuff late in grade school. I went once. It’d be difficult to articulate the reasons, but it has always repulsed me to my core.

But, do you see what they are doing? Reading the comments, it is like an infomercial for their view of the Church of tomorrow.

Articulating the Church in 10 Years

A while ago, I reacted to an article on National Catholic Reporter and the image from that post is a sales piece in itself succinctly capturing their vision: 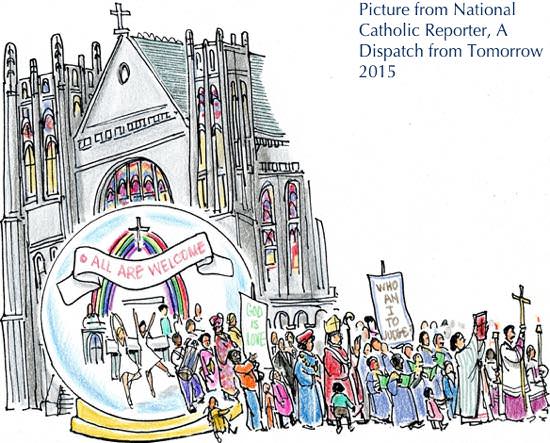 Again…  if people are into that, that appears to be a powerful magnetic image for people who worship themselves. Like the sales call, they can see themselves flitting about in tutus and rainbow sashes to the sounds of hell groaning. For them, it is magnetic, like an infomercial.

But, it also creates, like the sales guy can, a goal that they can perceive.

What other groups have these goals?

Here’s a small list I can think of off the top of my head. I’m sure I am missing out on a lot here, so please feel free to add more. Also, please correct my statements… these are just stabs at ideas.

Charismatics:   Sees a future where everyone is slain in the spirit with their novel sacrament and speaks in tongues. Also likes the guitar and drum set at Mass, but prefers electric because it reminds them of the energy of being slain in the spirit, and the shrill wailing of the electric guitar is like speaking in tongues.

AmChurch:  Sees a future where man is worshipped in concrete cells just large enough to hold a felt banner, four altar girls, and guitars, but enough space for liturgical dance and their 40 closest friends who will be extraordinary ministers. Don’t forget the sign language interpreters and extra deacons, women or men.

Traditionalists:  See a future where the Mass (in language, and in prayer) is directed at worshipping God, and is free of worldly gimmicks, and is the same language whereever found. Consistency is cherished because it reflects the timelessness of Heaven, and mirrors this trait of the eternal.

I’m sure there’s more groups. Which ones can you think of?

If everything could be fixed in ten years, what would the Church look like?

This article, The Church in 10 Years: Guitars, Speaking in Tongues, Women Priests? is a post from The Bellarmine Forum.
https://bellarmineforum.org/church-10-years-guitars-speaking-tongues-women-priests/
Do not repost the entire article without written permission. Reasonable excerpts may be reposted so long as it is linked to this page.