What Hamish Fraser Saw About Your Children Thirty Years Ago 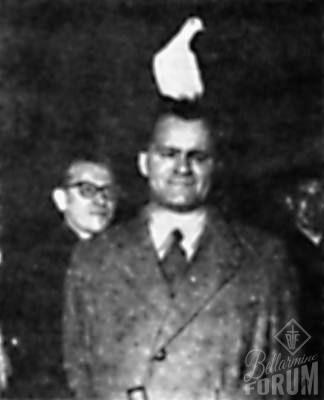 Hamish Fraser had a dove land on his head when he gave a talk on Fatima to an audience of 10,000.

I’ve been going back and listening to some old cassettes lately. I ran across one quote that is harrowing. I mean it. The insight some of these people had peering into the state of the day reaches across decades to today and is fresh, if not terrible.

I can’t help it — anyone who has listened to Fr. Vincent Micelli, Bill Marra, and many of the now deceased greats knows why:  there was something magical in the way they spoke about the Catholic faith. If you’ve listened to Mother Angelica, you know what I mean. You become captivated by these ordinary people. In projecting their love of God, and magnifying Him, it seems that God made their personalities magnified. But I ran across my stash of Keep the Faith cassettes (gold mine) and on a whim listened to one for the nostalgia… and now I can’t stop!

I have listened to the same talk by Bill Marra given in the U.K. several times over the weekend, and there’s so much, but one quote got me.

Long before Stephanie Block was detailing the intrusion of communist workforce training into Catholic education, or Communist ideas into the Catholic parish…

A Communist Discovered that the Church Had the True Answers to Social Ills, Converts

Way back before I even cared about reading that Wanderer newspaper I’d see brought home to my childhood house, a Scottish man who renounced his communist training and converted to Catholicism had been writing, even being featured frequently in the Remnant and the Wanderer.  His insights were sharp and his knowledge of communist goals and tactics from the inside animated a rich analysis of what to expect. What converted him to Catholicism was that he saw that the Church had the answers to the social ills that communism purported to solve.

He kept warning of an “immanent apostasy” in the late 80’s — I believe that apostasy happened — just look at the empty pews and the Judases yet in the Church.  But, what seems imminent now is the pending open declaration of the long existing de facto schism in the Church.

The Plot of the Communists Revealed By the Defector

Earlier than that, though, he had already been a voice in the wilderness alerting people with what he knew. It was he that declared:

The plan of the Communists was to “put on a smiling face” on the Church and all the while attempting to destroy the Catholic Faith of Catholic families.

This man was Hamish Fraser. He and Bill Marra became great friends, and in the talk by Dr. Marra, he gave this quip by Fraser, who Marra said intended to be at the talk but was unable to come.

“As things now stand, there is no normal way to communicate the faith to the next generation.“

Dr. Marra explained that he meant that the press, the schools, had so abandoned the faith that they taught errors. That the only way parents could fulfill their God-given duty to communicate the faith to the next generation was to do it themselves.

I mentioned posts by Stephanie Block above, and we’ve had posts about Subpar catechesis…

Beyond a Catechetical Problem

I may be wrong, but I do not think the situation has improved since Fraser wrote that. The disconnect doesn’t seem to be limited to catechesis, though…  I think Fraser may have been talking about the stripping away of cultural underpinnings of faith as well, as I highlighted some time ago in What Really Killed the Church. Again, when highlighting that we’ve succumbed to ignorant orthopraxis as well, we seem to have a disconnect between the old greats and the ordinary practice today.

But people today seem to laugh at the suggestion that there was or is a problem, don’t they? And to talk of communists actively engaged in subterfuge is … is…  well, conspiracy. It should therefore be discarded entirely, right?

Has it gotten better since Fraser, or have the normal ways of transmitting the faith been subverted entirely?

This article, What Hamish Fraser Saw About Your Children Thirty Years Ago is a post from The Bellarmine Forum.
https://bellarmineforum.org/hamish-fraser-saw-children-thirty-years-ago/
Do not repost the entire article without written permission. Reasonable excerpts may be reposted so long as it is linked to this page.