The Church of Wussies: this is why John the Baptist was Beheaded 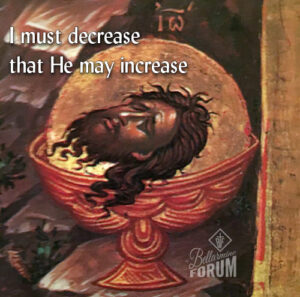 Should we expect to be treated any better than John the Baptist or Our Lord?

I’ve gotten sick of hearing the phrase “oh, if they do that, it will cause a schism.”  Almost always there is some quasi-pastoral calculus as to why we should suffer a stupidity in order to keep the faithful in the Church. Communion in the hand, for instance. A stupid, mind-numbing, pernicious attack on true faith. Rather than correct the problem, we are lead down a road of peaceful coexistence.

It’s the same with so many other things, as well. This idea that some grave issues aren’t as grave as some other issues.  I get it. It’s the fear of dropping the nuclear bomb. It’s the fear that some people will be so shocked that they’ll leave the Church over it.

I don’t know about anyone else, but I’ve never had a problem with the idea that someone would leave the Church because they cannot get Communion in their hand. “So long!” I’d say, as I pack their bags. Anyone that’s dealt with a child that threatens to runaway knows that’s the way to deal with it. Send them on their way…  bait the threat and the resolve to threaten diminishes.

Fear in the face of the threat makes the authority hostage. So it is with the Church.

Hostage to the “Schism” Terrorists

Same with abusive use of extraordinary ministers at every freaking Mass. If they actually stopped it tomorrow (as Rome told them to do in 1997), and all those busybodies “left” in a huff, would it be so bad? After the huff wore off, they’d be back looking for some other busybody thing to do, right?

Countless abuses are carried out in the name of preventing schism:  guitars, felt banners, clowns, techno Mass, no or infrequent confession times, no Friday abstinence, and on and on. The inverse is true, too. Countless disciplines are foregone for fear that people will leave:  altar rails, wreckovations, erroneous teaching on contraception, and now this creature of Amoris Laetitia.

The fear of the imaginary threats of spoiled brats emboldens them to demand more.

Last year, it was apparent that the looming “discussion” of Amoris Laetitia was an accommodation being proposed over the notion that so many have left because they cannot receive Communion. Nevermind that they probably want cheeseburgers on Friday, and want that Communion to be placed in their hand free from an altar rail. Nevermind that we made these spoiled brats.

I wrote at that time how John the Baptist was beheaded for this. If the sarcasm of that post doesn’t resonate here, then let me pour some more on the plate. 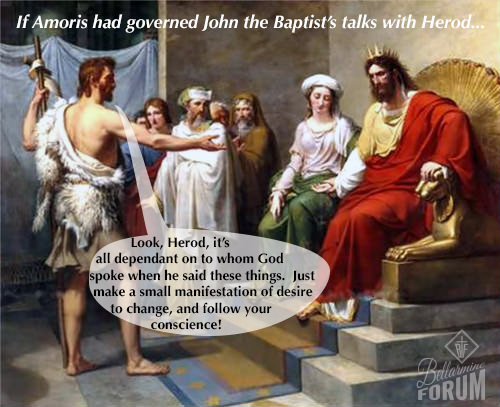 A Church of Wussies

Unlike Our Lord, and St. John the Baptist, who had no problems speaking truth, and then helping people reorganize their life to live in truth (this is called repentance), we have a Church full of wussies. Trembling at the imaginary threat of empty pews.

Like all phantasies of doom, the reality has been made. We do have a Church split in twain thrice by seven. And the problem is not that we fail to accompany sinners. The problem is that we don’t think sinners need repentance. That is apparent when Cardinal Kasper says christian life is too hard (denying grace exists). It’s also apparent when nearly all decisions of the hierarchy today are hell bent on accommodating unrepentant sinners and failing to see. Just look at confession schedules — as any bishop can do without even leaving his residence.

Too afraid to speak truth. Wussies.

And the wussies make us who admire the bold witness of Our Lord and Savior Jesus Christ pay for their fears.

Today, we honor St. John the Baptist as a model of our faith to tell sinners the truth, even when we may be killed for it.

For all the talk about accompaniment, living on the margins, pastoral concern, and other buzz words you can find, there is silence on the worship of Our Lord. St. John the Baptist saw witness to Our Lord as the thing these sinners needed most. He didn’t tell Herod to make a small manifestation of desire to change”…  he told him to repent. Make straight the path!

Use the altar rail. Don’t presume to touch the Sacred Body of Christ. Don’t make the house of God into a farce. Believe and worship the Son of God. Everything else will work out and He will help you straighten it out.

St. John the Baptist, pray for us! 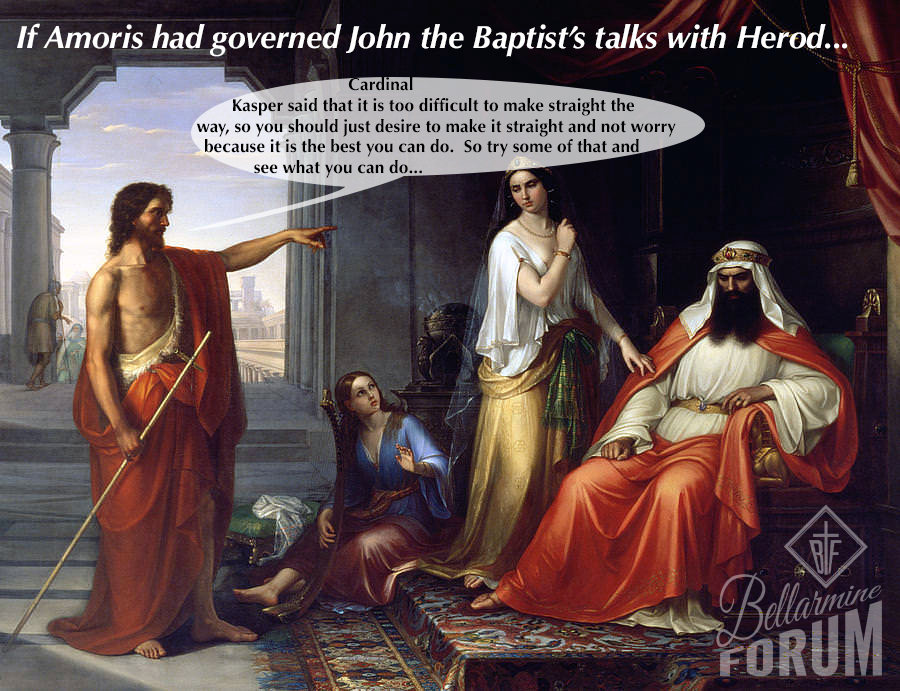 This article, The Church of Wussies: this is why John the Baptist was Beheaded is a post from The Bellarmine Forum.
https://bellarmineforum.org/church-wussies-john-baptist-beheaded/
Do not repost the entire article without written permission. Reasonable excerpts may be reposted so long as it is linked to this page.