If you read the headlines today, it sounds like Pope Francis made an infallible pronouncement! (whoa, step back!).

You know what that means, right? Guitars Masses cannot be taken away! (can you hear the unicorns cheering?) Liturgical dancers are now endorsed by the Pope!  And, we MUST make a sign of peace? Because, Pope Francis…

You know the game by now. The inch seemingly given in Rome is stretched to the stratosphere in AmChurch. Or, I exaggerate…  I’m sorry. It’s only stretched as far as one’s orans position can reach.

What’s that? You say you don’t believe me?

I can’t blame you. After all the mess over Amoris Laetitia and other messes of the day. And have you seen Pope Francis’s processional cross? It doesn’t inspire a firm confidence of aesthetic taste.

The Pope was addressing theologians today. He presented a 2500 word statement in which he says that the liturgical reforms of Sacrosantum Concilium are irreversible.

Wait. Does that surprise anyone? It’s an apostolic constitution.

Irreversible. (I can hear the grumbling in the back of the room because some people want all of Vatican II erased — skip that for a minute and hear the rest here).

He said further that the Vatican II document “whose lines of general reform respond to real needs and to the concrete hope of a renewal; it desired a living liturgy for a Church completely vivified by the mysteries celebrated.”

Hmmm…  Vatican II did not order Communion in the hand (see the dastardly and crooked way that happened here). Surely, Pope Francis is not saying that is irreversible.

Somebody tell the National Catholic Reporter (a.k.a distorter)! They seemed to misunderstand. 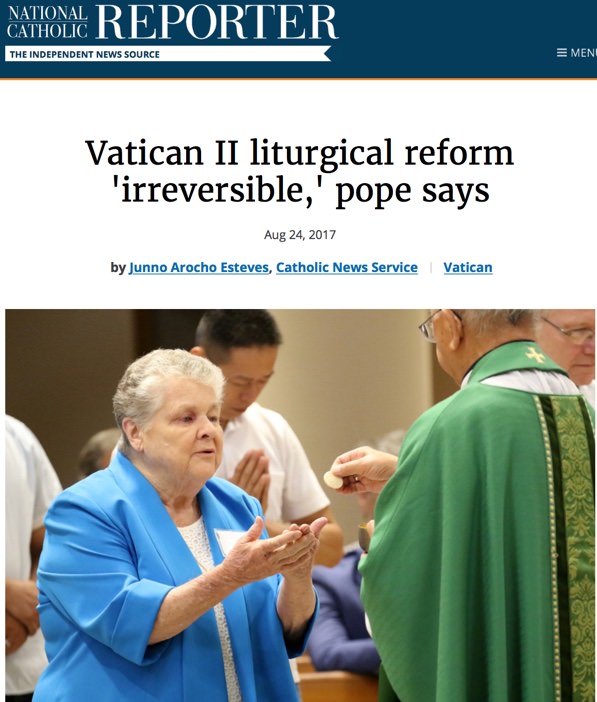 That image has nothing irreversible in it.

In other words, I don’t think Pope Francis is endorsing Techno Masses and signs of peace as irreversible.

I’m not naive, though. I think even he understands that he is making it difficult to argue for ad orientem reforms of the reform and other sensible retractions of AmChurch-type excesses of the abusive modernists.

Phil Lawler has a good take on it over at Catholic Culture:

In his address to Italy’s National Liturgical Week, Pope Francis reminded his audience that movement to reform the liturgy began with a commission created by St. Pius X, and continued with the encyclical Mediator Dei by Pope Pius XII. And that process is “irreversible,” he now definitively states. Those two Pontiffs blazed the trail, and we should still be following it. So if abuses have cropped up—liturgical novelties that “reverse” the direction set by Mediator Dei,” say, or practices that are demonstrably counter to the instructions of Sacrosanctum Concilium, they should be treated as aberrations and rooted out.

Pope Francis is notoriously unsympathetic to calls for the “reform of the reform.” But the logic of his August 24 speech points unavoidably in that direction. If we have not yet achieved the goals of the reform, and those goals were established more 100 years ago when the process began, we need to examine where, how, and why things have gone awry.

I think I agree with this. As much as Pope Francis makes himself seem closer to the homeless-looking hippy that wants to wander the sanctuary during Mass, he didn’t just try to mandate that. And, even though he seems to get irritated by Cardinal Sarah’s excellent suggestions, he isn’t shutting them out. He’s just saying that he isn’t going to erase Vatican II, not even on the liturgy.

I did have to laugh with some of the comments over on the America Magazine article (has anyone else noticed how much more trolling they are taking these days?). There’s a great comment about the Latin Mass. And there’s some other good comments, but I thought this one was a pedestrian’s quip:

Kenneth Wolfe – So, divorce and sodomy are up for discussion, but the novus ordo is some sort of dogma? Thankfully entire papacies are reversible.

I think that is a fair criticism of the state of affairs in the Vatican. Even though it overstates the issues, it is what ordinary people — you know, those of us that Pope Francis wants to be close to — perceive in all this. Priorities appear to be upside down. And those upside down priorities are inverted and deformed once interpreted in America.

Whatever else Pope Francis was doing, it really isn’t the news AmChurch media is making it out to be.

…maybe tomorrow I’ll post about this Medjugorje thing, too…

Our Lady, Queen of Heaven, pray for us!

This article, Pope Francis Endorses Felt Banners, Guitars, Carol King “Hymns”, Church in the Round is a post from The Bellarmine Forum.
https://bellarmineforum.org/pope-francis-endorses-felt-banners-guitars-carol-king-hymns-church-round/
Do not repost the entire article without written permission. Reasonable excerpts may be reposted so long as it is linked to this page.