The Flight into Egypt.

1.  One night, as Joseph slept, a vision came before his eyes.  He saw an angel who bade him rise and take the Child Jesus and His Mother and fly into Egypt.  Without a moment’s delay he rose quickly, called Our Lady, put together what was necessary for the journey, and started ere dawn appeared in the sky.  His heart was torn with sorrow, but, like a true son of obedience, he hesitated not for a single moment, but accepted all as coming from God.

2.  Long and perilous was the journey, many were the sufferings of the Holy Family.  Perils in the desert, perils from the robbers who beset the road, perils from the wild beasts, perils from exposure to the sun by day and to the cold by night.  Sorrowful indeed was St. Joseph’s heart, as he trudged on day by day leading the ass on which Our Lady rode.  Sorrowful not for his own sake, but because of the anxiety he felt for the safety of the precious treasure committed to him.  Sorrowful at the thought of all they were suffering, and would suffer during their exile.

3.  At last they arrived at the destination God had fixed for them, and here St. Joseph earned a scanty livelihood day by day by his trade as carpenter.  How uncongenial was all around!  They were among those who knew not the true God, among their old oppressors in Egypt, among idolaters and pagans.  No murmur ever escaped St. Joseph’s lips; he was willing to wait in Egypt as long as God pleased.  Do I submit with blind obedience to all that God commands through my superior or the arrangement of His providence, without murmuring or complaining? 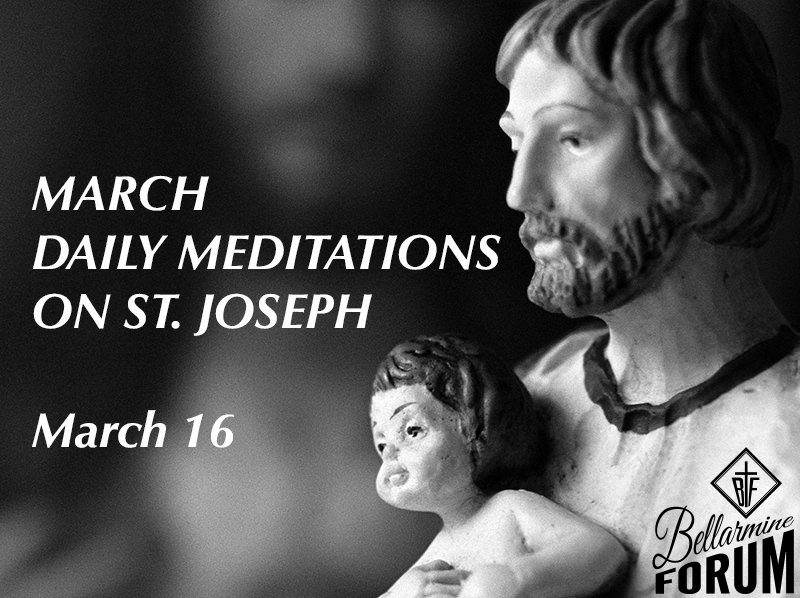 This article, March 16th — St. Joseph’s Fifth Sorrow. is a post from The Bellarmine Forum.
https://bellarmineforum.org/devotional/the-catholic-daily/march-month-st-joseph/march-16th-st-josephs-fifth-sorrow/
Do not repost the entire article without written permission. Reasonable excerpts may be reposted so long as it is linked to this page.