The Loss of Jesus for Three Days.

1.  It was obligatory on all Jews who were within a moderate distance of Jerusalem to pay a visit to the Temple once every year.  In accordance with this law Joseph went up each year from Nazareth, and Mary went also.  As soon as He was old enough, Jesus accompanied His parents.  When He was twelve years old.  He travelled thither, but on the return journey they missed Him.  Vainly they sought Him everywhere, and with heavy hearts they asked each member of their company if they had seen Him.  No, He was not there.  Oh, what a bitter grief for St. Joseph!  How terrible were those three days without Jesus!

2.  Could it be through any negligence on his part?  Joseph’s motive for separating himself from Jesus had been a most unselfish one — that Mary might have the joy of His company.  Men and women travelled in separate caravans, and children would travel with either.  But perhaps he might have been more vigilant.  Anyhow, he had lost Jesus, and what could be worse than that?  How different from us, who too often remain content with earthly things, with scarce a thought of Jesus!

3.  Joseph’s grief was increased by witnessing the sorrow of Mary.  Together they returned to Jerusalem, asking, like the spouse in the Canticles, “Have you seen Him Whom my soul loveth?” All in vain; for three days and three nights no trace of Jesus.  Those days appeared like centuries.  Joseph, then, can sympathize with my desolation.  He knows the terrible void, the joyless days, the weary nights, when Jesus is absent from the soul. 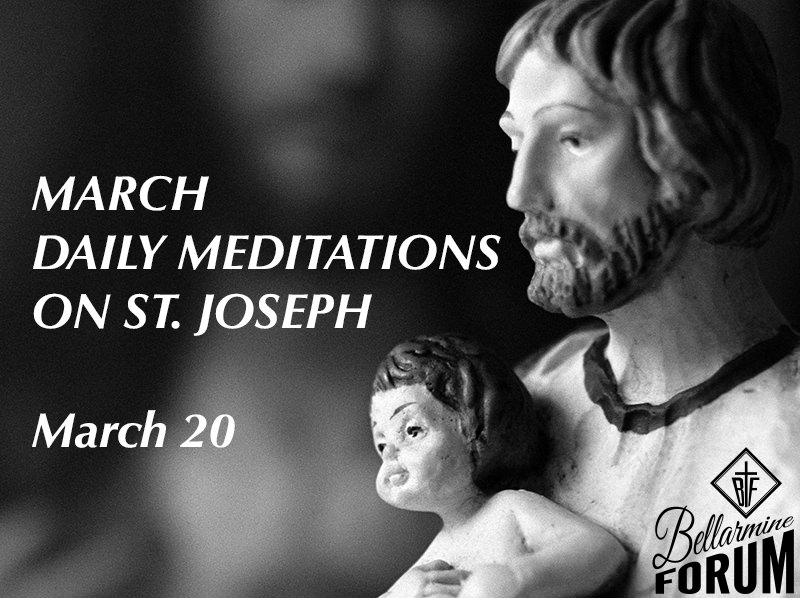 This article, March 20th — St. Joseph’s Seventh Sorrow. is a post from The Bellarmine Forum.
https://bellarmineforum.org/devotional/the-catholic-daily/march-month-st-joseph/march-20th-st-josephs-seventh-sorrow/
Do not repost the entire article without written permission. Reasonable excerpts may be reposted so long as it is linked to this page.