Today, April 22, is “Earth Day” according to some people who have the power to influence the media and make something from nothing. I don’t really remember when I first ever paid attention to the Earth Day thing. I know over the years it has grown into a cult of sorts, however. I say cult because I don’t think anyone pays attention to it or what it is supposed to be — but there is a religious sort of observance by some people. It wasn’t always that way, though — about five years ago a push was made to reassert this strange concept.

Says the Earthday.org website, run by the earth day network:

Earth Day 2010 came at a time of great challenge for the environmental community. Climate change deniers, well-funded oil lobbyists, reticent politicians, a disinterested public, and a divided environmental community all contributed to a strong narrative that overshadowed the cause of progress and change. In spite of the challenge, for its 40th anniversary, Earth Day Network reestablished Earth Day as a powerful focal point around which people could demonstrate their commitment.

Earth Day Network website, history of Earth Day.  I think most of the Bellarmine Forum readers can recognize the dialectical (think Saul Alinsky) rhetoric as well as the communist organizing occurring here.  Read the first part to see the frozen ENEMY:  “Climate change deniers, well-funded oil lobbyists, reticent politicians, a disinterested public, and a divided environmental community”   Wow! That sounds awful! We wouldn’t want to be called any of those bad things, would we? Are you a denier? Part of the “well funded” establishment? No!  not at all!

Here’s the Marxist social judo (cf. KGB defector Yuri Bezmenov, A Love Letter to America):  Prove you are not a denier, a rat imperialist, or last bourgeoisie by doing what?  “Demonstrate your commitment”  to the “powerful focal point” of “progress and change.”

Whether it is Gaia paganism, secular well-wishing, social activism, or just filling a vacuum of true religion doesn’t really matter because it all has this same effect on people:  they think there is some higher value to be learned and observed here (if they didn’t leave a vague open concept of higher good, they’d be unable to keep the interest of the useful idiots). See how they describe it:

“The fight for a clean environment continues in a climate of increasing urgency, as the ravages of climate change become more manifest every day. We invite you to be a part of Earth Day and help write many more victories and successes into our history. Discover energy you didn’t even know you had. Feel it rumble through the grassroots under your feet and the technology at your fingertips. Channel it into building a clean, healthy, diverse world for generations to come.”

I don’t think I want any more “victories and successes” for “progress and change.”  And if I want urgent ravaging energy rumbling in my grassroots, I will water and fertilize the lawn.

It sounds like an empty shill of the Permanent Revolution to me. Something that would make Lenin happy, very happy. Oh wait, there is something of a connection there, too:  “Earth Day is honored around the world on April 22, although larger events such as festivals and rallies are often organized for the weekends before or after April 22.”  Gee, April 22 is the birthday of Lenin! Imagine that! The first Earth Day was 100 years after Lenin’s birth, April 22, 1870, and the first Earth day was April 22, 1970.

I’m not interested in celebrating the birthdays of Lenin, Trotsky, Marx or any of the other Luciferians that dragged us into this world of permanent “progress and change.”

Lenin, as all sons of Satan, would wish to undo the Gospels. It’s always funny to me that they tell us to plant a tree for earth day. I can’t help but wonder sometimes if they aren’t trying to make a statement about this Gospel passage:

And in the morning, returning into the city, he was hungry. And seeing a certain fig tree by the way side, he came to it, and found nothing on it but leaves only, and he saith to it: May no fruit grow on thee henceforward for ever. And immediately the fig tree withered away. And the disciples seeing it wondered, saying: How is it presently withered away?

And Jesus answering, said to them: Amen, I say to you, if you shall have faith, and stagger not, not only this of the fig tree shall you do, but also if you shall say to this mountain, Take up and cast thyself into the sea, it shall be done. 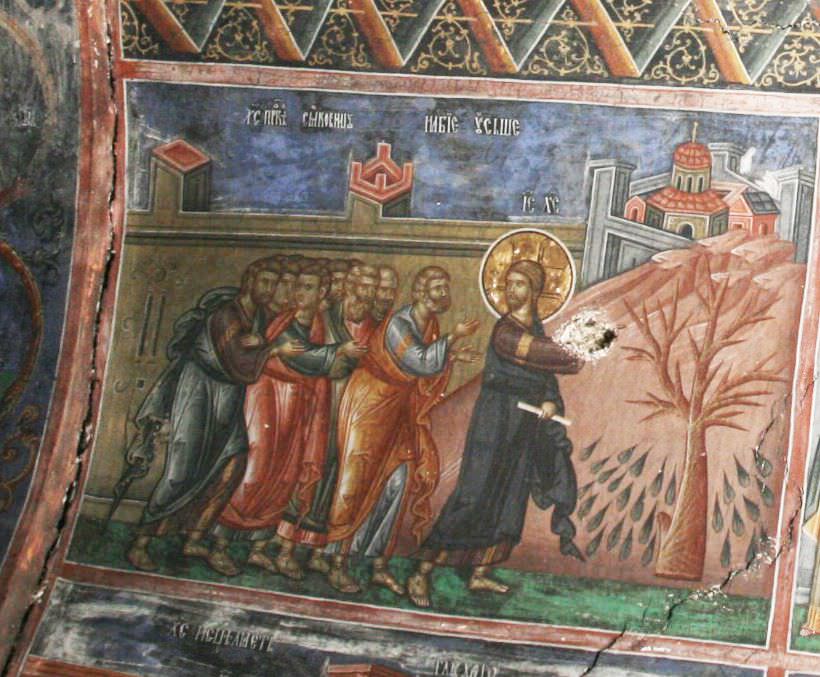 Jesus, it seems, is not a fan of Earth Day. Neither am I, but that doesn’t make me a climate denier, disaffected bourgeoisie, or some other hateful thing — it makes me someone who looks to God and His revelations for religion, not into some vacuum of social activism for vague ideals.

This article, Earth Day, Shmearth Day… Lenin and the Fig Tree is a post from The Bellarmine Forum.
https://bellarmineforum.org/earth-day-shmearth-day-lenin-and-the-fig-tree/
Do not repost the entire article without written permission. Reasonable excerpts may be reposted so long as it is linked to this page.