Francis: Even Aliens are Subject to Jesus, not the other way around

The Bomb tossed into the room of society

This past Monday, Pope Francis captured the imagination of the world with his comments during his homily at Casa Maria. Said the Pope:

If tomorrow an expedition of aliens from Mars arrives…and one of the green ones with long nose and big ears, like those which children draw, comes and says, ‘I want a Baptism!’ What would happen?

Then, he spoke on the Mass readings for that day where St. Peter was criticized for dealings and being with those unclean gentiles. Pope Francis was making the same point that St. Peter made:

When the Lord shows us the way, who are we to say, ‘No, Lord, it is not prudent! No, let’s do it this way.’ Who are we to close doors?

He’s right. The Church has always accepted her mission to go and make disciples of all nations. Pius XII stated it this way:

With regard to the future of humanity, one can in the end do no more than conjectures. What concerns Us is that the Church is aware of having received her mission and her task for all time to come, and for all men, and that in consequence she is not bound to any specific culture.
–Allocution to the 10th International Congress of Historical Sciences (1955).

Pope Francis then was using the concept of aliens to reiterate that from her beginning, the Church has but one mission: to bring people to know Jesus Christ. That Pope Francis chose to use aliens as an example is a good one — after all, aliens are a feature of modern imagination. In the early centuries, foreign lands and people in distant parts of the world were fascinating because there was little knowledge of them. This fascination continued for centuries and centuries, even among the Church with strange concepts of foreigners, such as depicting them with dogheads, as I’ve written here before. You see, the imagination of the unknown brings about reactions. Against those reactions, there is the Church’s mission… everywhere, the Church must go… even to the dog-faced peoples and the aliens.

St. Christopher with Dog Head. We’ve talked about baptizing aliens before, and even made them saints!

In his hypothetical, Pope Francis said that the alien who says, “I want baptism!”would be baptized. This was a smart move on his part because it limits his example.

Overlooked in the reactions to Francis’s comment, he intentionally limited his hypothetical alien to one that, a) could speak; and, b) expressed a desire. He was obviously intending to imply that IF there is an alien and that alien asked for baptism. The notion is that the alien has intelligence and a will. i.e. that the alien was a man. Perhaps better to bring this image of a spaceman: 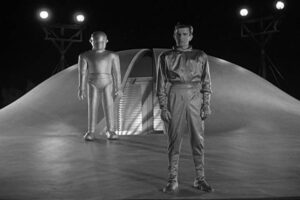 But today, people have changed the image, and even Pope Francis evokes the image by referring to martians. They look like this:

But no matter what the alien looks like, Pope Francis is evincing a characteristic:  rationality and a will. In other words, he wasn’t intending to suggest that the Church would baptize an animal. Rather, he was stating that the Church universal mission to proclaim the Gospel of Jesus Christ is truly universal.

For us MEN and our salvation…

Why did Pope Francis do this and limit it to rational/intelligent persons? For two reasons really. First, the Creed limits the salvation of of the world to having effect on man (as opposed to angels). Earlier today, I posted the picture below as a teaser of this story — a friend sharp in the faith brought this point up immediately, noting that the direct implication is that angels, whether good or bad, cannot be baptized. Pope Francis agrees.

Second, I believe Pope Francis is capturing the imagination of the secular world that is fascinated with aliens. In fact, there are a great deal of people who believe aliens will bring salvation to us! By showing the proper relationship, that even aliens are subordinate to the Church’s mission of salvation, Pope Francis was introducing a logic bomb to the popular culture, in the very language our culture is using! Quite clever.

Shouldn’t the Pope engage and challenge the zeitgeist?

Several years ago, Pope Benedict raised quite the stink when he tossed a bomb in the waters of theology by saying that a gay prostitute who began to use prophylactics made a step towards moral life. It was a brilliant maneuver by Benedict, albeit quite uncomfortable for the status quo. Commotion ensued, arguments were had, and in the end, the Vatican issued clarifications.

I can remember laughing throughout the entire ordeal because people who believed they were arbiters of all things Catholic shouted indignation that Pope Benedict did not clear his commentary with them before saying such things. It was almost as if a segment of Catholics believed that he should have delegated any speech on the topic to them, and the pope broke a rule by speaking himself.

Is the Pope only allowed to speak on dogma and doctrine?

Throughout these reactions to various Papal bombs, I’ve been surprised that people expect the Pope to be silent on all things except for what’s in the catechism. They don’t say that, but you can see the implications of certain critics. The pope has a box he must stay in, according to those folks. For others, they resent the need to explain what the Pope really said.

Again, this week, I couldn’t help myself but laugh at people’s reactions:

At the end of the day, Pope Francis captured people’s imaginations and caused discussion on the relationship of the Church to the universe. I think that’s a good thing. Especially because what Pope Francis actually said is so clear: it doesn’t matter from where the man comes, anyone who wants baptism will be baptized. Amen.

Pope Francis really did make it clear to some groups however. The International Raelian Society, a group lead by a persona name “Rael” issued a statement, that among other things, said:

“There will be no need to baptize ‘aliens’ when they decide to come back” declared Rael, “they are the ones who created all religions on earth and who were mistakenly taken for gods. Instead of offering them to be baptized, he will have to acknowledge that they are the gods he has been praying to all along.”

(!) See the rest of their message here, if you must. I think it speaks for itself: Raelians think aliens are gods _c.f. and n.b. – we recently clarified this error in relation to satanists but that contravenes the first commandment ab initio. Too bad Raelians.

They aren’t alone, however. Increasingly, shows like Ancient Aliens inspire discussion that the Anunaki, or some other extraterrestrial persons (read: demons) are the authors of Judaism, Catholicism, or others.

As much as I enjoy seeing them explore ancient places and show mysterious buildings and structures on earth… we all know Jesus is Lord.

I’d say this is a win for Pope Francis because his comment brought into sharp focus the relationship even aliens have with Mother Church. So sharp that they immediately had to object. That’s good for us, too – we don’t have to guess on what some of these believe.

There’s more to say on this type of comment by the Pope. I, for one, enjoy it when the Popes toss rhetorical hand grenades into the crowd. Perhaps in an upcoming entry I will elaborate on the loss of curiosity among Catholics, and what it means for society at large.

Today however, I think this picture says it all: 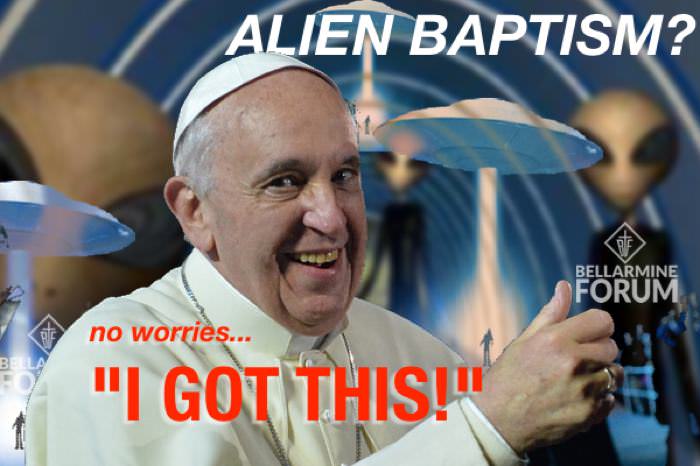 This article, Francis: Even Aliens are Subject to Jesus, not the other way around is a post from The Bellarmine Forum.
https://bellarmineforum.org/francis-even-aliens-are-subject-to-jesus-not-the-other-way-around/
Do not repost the entire article without written permission. Reasonable excerpts may be reposted so long as it is linked to this page.