Getting Testy about Testing

You know, it wasn’t that long ago that Johnny – and Juan – could read. They could recite the multiplication table, too, and could quickly make change, tally a ledger, and calculate simple percentages.

Their teachers didn’t teach to a test; they taught basic, academic content. Johnny’s score on standardized tests – and Juan’s –measured the level to which they had mastered, with their teachers’ help, these basic academic skills.

Public school systems such as the one in New York City, while far from perfect, managed to educate enormous numbers of students – sometimes as many as 60 to a classroom – from diverse backgrounds, including ghetto descendents of slaves and non-English speaking immigrant children. Some children did better than others but most learned how to read, despite disadvantaged backgrounds.

From “Look Say” illiterates to Standardized Tests, not good enough for Common Core

In 1955, educator Rudolf Flesch saw this changing. He published Why Johnny Can’t Read: And What You Can Do About It, demonstrating the disastrous results of a particular reading pedagogy called “look-say” in which students simply memorized entire words rather than learning how to sound them out phonetically. Traditional introduction to the fundamentals of phonics, he argued, almost universally produced readers; “look-say” produced a startling percentage of non-readers.

Flesch’s thesis, that we have to tools to teach people to read and aren’t using them, has proved increasingly poignant as the decades pass. The steady drop in standardized test scores (even as the tests themselves are “dumbed down”) is heart-breaking because it’s difficult for a person without fundamental academic skills to function productively in the world.

Sixty years and many scores of pedagogical experiments later, Johnny’s inability to read well is epidemic. Bad pedagogy, of course, isn’t the only factor. Children from unstable families have always had a harder time concentrating on their studies and this is an era of overwhelming social instability.

And yet, there are contemporary educational models that prove academic failure isn’t inevitable. In 1990, the principal of a predominantly black, Baltimore inner-city school, Barclay, decided to address her school’s high truancy rate and declining academic achievement by introducing a very traditional curriculum into her school. Within three years, reading scores of the third grade were 20% above the national average, and math scores and writing skills were rising.

Barclay’s teachers were not teaching to the test. They were teaching children from “disadvantaged” circumstances basic academic skills using proven pedagogy. The standardized tests proved that the children had acquired those skills.

So, what are we to think of the supporters of “education reform” – pushing nationalized education that uses the consistently failed pedagogy of “mastery learning” (outcome based education/Common Core) – who decry the use of standardized tests?

For example, “hundreds” of complaints have reached the office of Democrat Senator Tim Keller, New Mexico Senate Majority Whip who is a staunch Common Core advocate, he tells us in a recent editorial.(1) The complaints “stress deep objection to the continuing trend of out-of-state, for-profit testing companies’ intrusion into the classroom.”

“New pedagogy,” Keller writes, has “changed the way we learn and the way we teach.” There’s just too much testing, driven by those with a nefarious “incentive to make the case for more testing.” 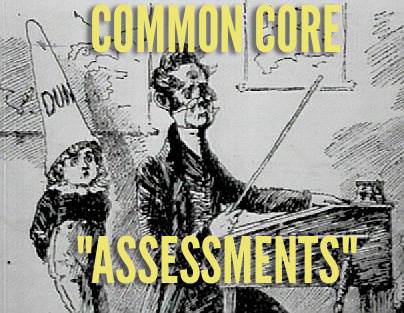 And one Albuquerque School Board member is encouraging a grassroots rebellion, encouraging parents to opt out of the end of course evaluations. “This is a prime opportunity for New Mexico parents to tell the public education department ‘we reject your idea of reforming our schools based on standardized tests’.” (2)

The Devil in the Detail:  IAF Mastery Learning

Yet another voice comes from the Industrial Areas Foundation (IAF) – an Alinskyian “community organizing” network that has been pushing nationalized education “mastery learning” reforms for decades. In New Mexico, Kip Bobroff, lead organizer of the IAF local Albuquerque Interfaith, received special thanks (along with others) for his contributions to “Positioning for the Possible: Investing in Education Reform in New Mexico,” by Chris Sturgis (1-2011), a “discussion paper for the philanthropic sector” to explore ways it could help implement Common Core. The IAF has expressed a long-standing animus against standardized testing, holding that few – if any – should be administered.(3)

Yet Common Core is all about assessment. Crazy, endless assessment. While it claims it tests math and English language arts only once a year in grades 3-8 and once in high school, either in the 10th or 11th grade, the fact is that every step of the curriculum is tested.

One New York City high school principal examined a Common Core math test designed for first grade and wrote: “Take a look at question No. 1, which shows students five pennies, under which it says ‘part I know,’ and then a full coffee cup labeled with a ‘6’ and, under it, the word, ‘Whole.’ Students are asked to find ‘the missing part’ from a list of four numbers. My assistant principal for mathematics was not sure what the question was asking. How could pennies be a part of a cup? Then there is Question No. 12. Would (or should) a 6 year old understand the question, ‘Which is a related subtraction sentence?’ My nephew’s wife, who teaches Calculus, was stumped by that one. Finally, think about the level of sophistication required to answer the multiple-choice question in No. 8 which asks students to ‘Circle the number sentence that is true’ from a list of four. Keep in mind that many New York State first graders are still 5 years old at the beginning of October, when this test was given.” (4)

Another example comes from a third grade English language arts “research simulation task” in which students must produce four “evidence-based selected response” items, two “technology-enhanced constructed response” items, and one “prose constructed response” item after reading about Eliza Scidmore who first proposed planting cherry trees in Washington, D.C. If they accomplish the first task correctly, they read a second story about George Washington Carver after which they are told to use the computer to write an article that synthesizes aspects of both texts.

The questions (assessments) that accompany this lesson shape how students are to understand it. The point isn’t just to measure the student’s comprehension of complex reading – which is a marvelous objective – material but to draw the “right conclusions.” For instance, students are first told:

Part A Question: The article includes these details about Eliza’s life:

Then they are asked:

What do these details help show about Eliza?

If you are baffled, proponents of Common Core will explain that this isn’t about just recalling facts from a text to answer a question. Instead, the student must synthesize several ideas and identify the author’s main idea.

Of course, that’s not what the question asks nor does it acknowledge the context of a more detailed reading. Given the answer Common Core has identified is “correct,” the question should have been: “were Eliza’s experiences valuable to anyone besides herself?”

Asking “what do these details help show” about her – coupled with the text read minutes earlier – show that Eliza did have many important jobs during her lifetime, that becoming a photographer was for National Geography was a source of great pride for her, and that she did find her travels very exciting.

The “correct” answer, therefore, is a trick because it doesn’t really seek what it asks. In the first place, the child is unreasonably expected to ignore what he has just read in the story and to only look at the three details provided…though this isn’t explained. Then, he must understand that the question is not to discover what this shows about Eliza but to understand the subjective conclusion the tester wants him to draw, namely, that one’s personal experiences may have benefits beyond oneself.

Should the child refuse to accept “a” as the only correct answer, he will be unable to continue with the lesson, to read the second story about George Washington Carver, or to write about the commonality of these two stories. He must agree that these details show that Eliza “shared the benefits of her experiences with others” if he is to succeed at this task, making this an awfully manipulative assignment.

How does this madcap sort of education “reform” affect real reading comprehension and math skills? In New York and Kentucky, two states that are a year into the Common Core State Standards curriculum, student scores on the standardized tests plummeted.

It’s not really surprising. We know how to teach Johnny to read.

We just aren’t doing it.

This article, Getting Testy about Testing is a post from The Bellarmine Forum.
https://bellarmineforum.org/getting-testy-about-testing/
Do not repost the entire article without written permission. Reasonable excerpts may be reposted so long as it is linked to this page.