Halloween? Are some merely putting lipstick on a pig?

Every year for the past fifteen years, I’ve heard the discussion among Catholics about Halloween. Some are fine with it, so long as it is kids dressing up and going door to door for candy. Others believe that the costumes should be of saints, and then they are fine with it. Yet, still others decline to participate.

I’ve had conflicted thoughts on the matter more and more of late. For the record, in my opinion, having been a kid who won awards for best costume, and enjoying the candy of door to door begging, I’m not without subjective bias on the question. Of course, All Saints day and a number of All Souls day practices were heavily practiced in my Polish home. For the record, here is a recent costume I wore: 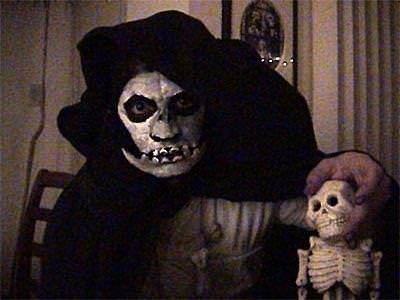 Having gotten the background out of the way, I find the question interesting: What is the point of Halloween? I saw it as nothing more than a diversion for kids. In that sense, I have no qualms over it. In another sense, I see the reservations some have to the practice.

More for the record: I don’t understand those who object to it merely for being popular. They come across as Jehovah Witnesses, who, for the record, don’t celebrate Christmas or Easter, either. I find another problem in those who suggest that dressing the kids up as saints somehow makes the idea OK, because, well, they are saints, not scary. That reasoning has all the charm of putting lipstick on a pig. If you don’t like pigs, no lipstick is going to make it something other than a pig. Same with Halloween: if you don’t like it, dressing your kids with something different doesn’t magically make it a Catholic practice. So, let’s not be confused from where my reservations come — there’s something about it that gives me pause, as i the day is turning into more than a mere diversion for kids. The fact that stores commercialize it to the extent they do, and people put Christmas-like decorations out weeks in advance doesn’t help. Something is changing about Halloween.

This year presents a better opportunity to analyze Halloween without a bias, though. In Poland, Halloween is a very new trend. It’s a hotly discussed topic in Poland. Poland is a Catholic culture, richly steeped in cultural events that are animated by Catholic faith. They have the day off for solemnities as holidays. They are also wrestling with the idea of Halloween. Their press is riddled with discussion of the idea of Halloween.

One of the opinions from Poland that really caught my eye, though, is that of the Cardinal Archbishop of Warsaw, Kazimierz Cardinal Nysz. He published a statement this year that is typically Polish in that it leaves no question as to the Cardinal’s feelings on the matter. For those who do not read Polish, I copy here the Google translation of it — please excuse the idiomatic transliterations — the Cardinal’s point is clear despite them:

“Halloween” is the promotion of the occult and magic

In a few days we will celebrate the Solemnity of All Saints and the Commemoration of All the Faithful Departed. This is the time when our eyes are on the final thing. Unfortunately, very often, the memory is replaced by the so-called promotion, “Halloween”. This is a result of the spread of the occult and magic.

The roots of “Halloween” are associated with the pagan celebration of the Christmas spirit and Celtic worship of the god of death. Anton Lavey, the founder of modern Satanism, said that the night of October 31 to November 1 is the largest celebration of Luciferian. They then place the violence increased in number with an occult. Church openly opposes such practices. The Catechism of the Catholic Church teaches: “You reject all forms of divination: recourse to Satan or demons, conjuring up the dead or other practices falsely supposed to reveal the future (cf. Deut 18.10; Jr. 29.8). Consulting horoscopes, astrology, palm reading, explanation of omens and lots, the phenomena of clairvoyance, and recourse to mediums all conceal a desire for power over time, history, and, finally, the people, and a wish to conciliate hidden powers. They contradict the honor, respect – and loving fear – that belong to God alone “(2116).

Occult practices often hide under the guise of fun “bribing spirits”, which invites the children, youth and adults. They are not consistent with the teachings of the Church. Thus, the practice of “Halloween” misses the Christian vocation.

That’s quite an opinion. Notice that the Cardinal did not suggest dressing up as saints, instead. That would be foolishness. Poland, after all, has no reason to put lipstick on pigs — they call it like they see it. Instead, there is a clear delineation of the problem: occult and magic promotion. The question is what practices of Halloween is the Cardinal describing? There does appear to be some difference in what is spreading in Poland versus what happens here. What I’m interested in from the Cardinal’s statement is his clear warning of what I must avoid — promoting the occult and magic; avoiding divination, etc.

In all honesty, though, I have to rethink my old costume above in lieu of the Cardinal’s warning. I read elsewhere that the entire Polish Conference of Bishops has urged Poland’s Catholics to avoid any celebration of Halloween as well. Again, I trust what they are saying, but I have a hard time reconciling what they are saying with the notion of what I did as a kid — is dressing up as a Campbell’s can of soup promoting the occult?

More news from around Poland is cumulative on the point. A Polish Catholic News agency (KAI) reported the dangers especially to young children who are tempted to carrying out actual tricks (a hint that the practice in Poland is a bit different than what I experienced). This news was reported from the Bishop of Szczecin, who is organizing events that highlight saints for All Saints day. That is an entirely different practice than dressing your kids up as saints and sending them out to trick or treat. It makes sense because they aren’t criticizing the outfits, but the notion of “tricking” for treats.

Finally, the Archdiocese of Krakow reiterated a statement from the Metropolitan of Gdansk (I am trying to show that this message is uniform across the Catholic Church in Poland). Again, I post a machine translation of the letter in Polish — its strength is not diminished even by transliteration:

Beloved in Christ the Lord, brothers and sisters,

Approaching the Feast of All Saints, which remind us of the liturgical celebration of the Christian vocation to holiness. Due to the progressive promotion of the occult and magic in the media, in schools and the local community on the occasion of the so-called. “Halloween” I recall facts about the tour and the relevant teachings of the Church.

The roots of ‘Halloween’ dates back to pagan celebrations of spirits and the Celtic god of death. Author of “Satan’s Bible” and founder of modern Satanism Anton Lavey said that the night of October 31 to November 1 is the largest celebration of Luciferian. Chronicles Police confirmed the increased number of violent acts of an occult, intensifying at this time. Church warns against engaging in any form of the occult and magic. This teaching is found in the Catechism of the Catholic Church (see 2116 and 2117), in a document of the Holy See, “Jesus Christ is the giver of living water” (Vatican, 3 February 2003), the Conference of Bishops Pastoral Note of Tuscany (Florence, June 1, 1994 ) and in the ordinary teaching of the bishops.

Implementation of children, youth and adults in the consent to occult practices, even under the guise of fun (“bribing spirits”) should be in the light of the foregoing be considered as incompatible with the teachings of the Church. In essence pagan celebration of All Saints Eve celebrations practiced by people considering themselves Christians spiritually impoverishing them. He turns attention away from imitating the saints and blessed, and is inclined to accept [a banalized/trivialized] vision of the world of the supernatural.

Celebrations on the successful experience of All Saints and All Souls Day heartfelt blessing,

I think more discussion should be had on the topic. From my personal experience, I was not tempted to trick anyone who didn’t give me a treat. But then again, as a child, I don’t remember anyone who didn’t give candy out, either. I remember being complimented on my costumes and having fun with work well done. Looking at the reaction of the Polish Church to the matter confronting them, I am thinking about this all over again.

For comparison, and to punctuate what Poles see, I don’t see Americans storming the churches and shrines on All Saints day and lighting votives and praying in public, either. See this video, sent from a friend who is a Polish ex-pat as an example. The Poles do storm churches, votive candles, shrines, and make pilgrim trips to cemeteries to pray for the deceased.

Whatever else the answer is, I am fairly certain it is not putting lipstick on a pig. At the same time, I can’t really say that the trick or treating I did as a kid encouraged or promoted the occult. I might not dress up as a witch doctor again though — but even when I did, I didn’t miss All Saints’ Day and proper memorials on All Souls’.

Surely you have an opinion on this — leave it in the comments, or find this article on our facebook page and put your comment there — because this topic deserves discussion!

This article, Halloween? Are some merely putting lipstick on a pig? is a post from The Bellarmine Forum.
https://bellarmineforum.org/halloween-are-some-merely-putting-lipstick-on-a-pig/
Do not repost the entire article without written permission. Reasonable excerpts may be reposted so long as it is linked to this page.