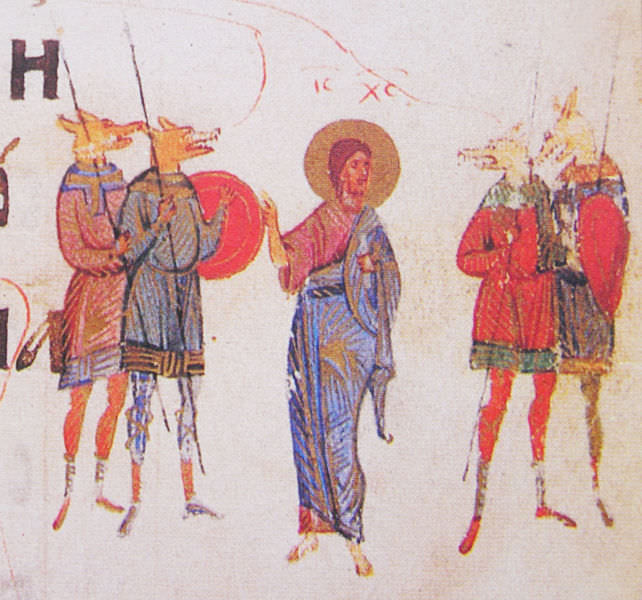 For all the Saints, even the Dog-headed ones from the Kiev Psalter of 1397!

Today we celebrate the day when the Church says, “well, if they’re not on a calendar anywhere else, today is their feast.” Still a Solemnity, and remarkably still a day of obligation in the United States (which seems to deprecate obligations of tradition and move fixed feast to nearby Sundays as a norm), All Saints day has itself some controversy over the precise beginning. It’s safe to say that All Saints day was a universal feast on the Roman calendar by action of Pope Urban IV in the 13th century. Many accounts state the beginning as earlier, though. The purpose of the day is a rather utilitarian catch-all, instituted to honor all the saints, known and unknown, and to supply any deficiencies in the faithful’s celebration of saints’ feasts during the year.

Icon of the Synaxis of All Saints

Although the Roman calendar celebrates this feast on November 1, the Eastern Churches, all of them, celebrate the Synaxis of All Saints on the Sunday following Pentecost. The idea and notion is the same in their celebration. The Sunday of All Saints has its own prayers fitting for the feast, but the troparion, or essential praise of the day, said during liturgy recites, “Apostles, Martyrs, and Prophets, holy Hierarchs, Saints and Righteous, having fought the good fight and kept the faith you have boldness towards the Savior. Intercede for us with Him, for He is good, we pray, that He may save our souls.”

Today then, is the day to invoke the intercession of St. That-guy and St. What’s-her-face. You know… That one that did that heroic thing and is a saint in Heaven now. If you know one those saints, today is their day! If you don’t know one of those saints, then today is a day to consider that there are a bunch of them.

Known and Unknown. Known saints are those all over the calendars of the Church. One of the first calendars of saints feasts was made by the Chaldeans. Quickly did the Greeks appropriate the procedure as well, and much later did Constantine’s organizational heft repurpose the pontifical academy away from living on bribes to determine the length of February to instead keep an accurate set of calendars (and calculate Easter the next year). Now, today, we have all kinds of calendars — Franciscan, Melkite, Jesuit, Roman, by country, and on and on. There’s even a great part of the Orthodox calendars recognized by Rome because the calendars are older than Rome’s! These saints get more feasting today, but what about the other half? St. What’s his name? When does he get noticed?

Today is the day of the unknown saints. I love that part of the feast — there are secret saints. Agents of the kingdom of Heaven that preferred to be discovered after final judgment. Denizens of the City of God who prefer to travel on the backroads and alleys. Today is their day for we’ll probably never know them by name universally until we see them assembled on the last day casting down their golden crowns upon the glassy sea, as the song goes. I’ve met a few of these souls in my life, who are now likely enjoying memory eternal. These were people who had no doubt led heroically virtuous lives, but will probably never attract a cause. Their names will never in this world be candidates for placement on any of the calendars of feasts. We might call these the B-list. They aren’t celebrities, but they are no doubt saints.

If you know anyone like that, think of them today. But also think of all those unknown saints – there’s a crowd!

Finally, we get my favorite part of today. The “deficiencies” in celebrating. My confirmation saint, Christopher, is subject of great controversies not only over his life, what he was, but even when he lived. No doubt he lived. And there’s no doubt he’s a saint. But, he has luck like mine — he was removed from the calendar! He was an A-list saint on the Roman calendar, but, no more. Now, he has no day to call his own.

This isn’t the first time he was described with obscurity in the account of his life, though. Early greek hagiographies of him recount that he was from the land of “the dog faced peoples.” Typical of my Greeks to use colorful language to describe foreign lands, but even more fun that in the times before the Internet, that Greek monks attempting to make icons of him took literally the description and painted him with a dog’s head! I think he has to chuckle about this as much as I do. He’s now one I think of today, though. 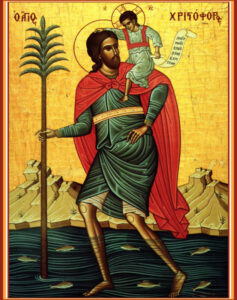 I didn’t think too long when I selected St. Christopher as my confirmation saint, but the more I learn of him as I get older, the happier I am with the choice. The most consistent story of his life, and the one consistently recounted in the eastern hagiography, was that he was a soldier who chose to follow Christ. He wanted to do something for Our Lord, but decided the only thing he could do well was help people cross a river. That’s what he did with his life — carry each person across a river as if he were carrying Jesus Christ. Then, one day, a little child appeared and Christopher attempted to carry this child across. Christopher had the worst time, as if the child weighed more than the heaviest person ever, and the river was terrible. Christopher carried on, and upon arriving across the river, the child revealed Himself to be Jesus and praised Christopher. Awesome — he’s a real life X-file!

Now there’s a bunch of other stories about St. Christopher, too. They are debated among academics, and nobody is really sure, so they removed him from the calendar. That makes today his feast and the feast of every other saint like him.

For St. Christopher, for all the saints like him, for that unnamed saint we knew or met in our own life, and for all the Saints! Pray for us!

This article, All Saints Day: X-files, B-list, and now Dog Faced Saints is a post from The Bellarmine Forum.
https://bellarmineforum.org/all-saints-day-x-files-b-list-and-now-dog-faced-saints/
Do not repost the entire article without written permission. Reasonable excerpts may be reposted so long as it is linked to this page.