Holy Saturday and The Blessing of the Easter Food

My grandfather’s sister, my great-Aunt Ann, was a formidable old Slovenian spinster. A woman who suffered greatly, she had no natural children of her own and lost her husband when his airplane crashed in the Pacific during World War II. She was a force to be reckoned with during her whole life and when she died in the early 1990s at the age of 82 a great lady left us. She was a devout woman who said her beads and was a regular at Mass. Hers was a commanding presence coupled with a dogmatism with which she spoke. Like many of her generation, her later years saw her clothed in the uniform of a housecoat, ankle-length nylons and dark-framed glasses (circa 1942) constantly slipping down her nose. She was free with unsolicited advice, switched to Slovenian when she didn’t want us kids to know what she was talking about (forgetting for a moment that my father was not a fluent speaker and had no idea what she was saying—except for the profanities), and she maintained some old world grudges over unknown ancient offences. She was also ornery in that she would be a contrarian just to be a contrarian. If one of her nieces or nephews offended her, she would immediately amend her Last Will and Testament—my father was the unfortunate beneficiary of such re-drafting; and while he once again attained to her good graces, she died before another testamentary amendment.

Aunt Ann lived in the old Slovenian neighborhood of Cleveland’s near East Side. 55th and St. Clair was—as it were—“Little Slovenia.” Transplants and immigrants from the old country settled there in the late 1800’s through the first half of the 20th century. The center and focal point of the neighborhood was and is St. Vitus Church. As a result of the unrest and blight of the 1960s the neighborhood went downhill and many of the old Slovenians moved out of the neighborhood. Only a few stalwarts remained—Aunt Ann was one of them. St. Vitus was always well maintained and the parishioners were both the neighborhood stalwarts as well as the Slovenes who moved out to the suburbs. Some of my most treasured memories of my childhood are visiting Aunt Ann during the holidays. When one went to visit her, it was truly stepping into the old world—even more so than when we visited my grandparents. The ambiance of her home bespoke old world charm and was imbued with humor, common sense, delicious food, and great love for her many nieces and nephews.

I recall especially visiting her with my father during Holy Week and Easter. I was always attracted to the old world customs of the neighborhood and St. Vitus Church and she was a ready participant in all of the parish’s activities. In particular, I remember visiting her one Holy Saturday with my father. We had dropped off some klobase or zelodec or some sort of food for an Easter dinner the following day. As only Aunt Ann could, she starting waxing philosophic about something, causing my Dad to yell at her and she to curse back. When all was said and done she mentioned that she had to leave to go to the church to get her food blessed. Dad ended up kissing her and telling her that he loved her. She replied that he was out of her Will and off she went to the traditional Holy Saturday Blessing of the Food. And off we went, back home to make our own preparations.

Though a humorous anecdote, it is one of the memories that I recall from my youth of that wonderful Holy Saturday tradition from the Slavic countries of Europe. The Blessing of the Easter Food is a grand event during the quiet of Holy Saturday. The Creed says that Our Lord, “descended into hell” before he rose from the dead. The quiet of Holy Saturday recalls this reality. Our churches reflect the terrestrial and temporal reality that Our Lord is still not with us—the statues are still shrouded, the tabernacle doors swing open, the altar is stripped, the sanctuary light is still extinguished. Yet amidst this silence, the faithful meet the priest with their baskets of food for the Easter feast. This tradition runs deep among the Slavic peoples. Poles, Slovenes, Croats, Slovaks, Russians, Ukrainians and others celebrate this wonderful tradition. Even during the terror of communist rule in the Soviet era, the faithful would maintain this practice.

Fr. Walter Ciszek, S.J. recalls this amazing faith of the people in Siberia in the memorable Easter of 1958 when he was somewhat free but unable to leave the Siberian city of Norilsk. These passages from With God in Russia are worth extended quotation here:

[The Blessing of the Easter Food] is a wonderful tradition in Russia and the Slavic countries. On Holy Saturday and Easter itself, the people bring baskets of food to the church to be blessed….The baskets are filled with colored eggs, butter, salo (fatback, like bacon), different kinds of stuffed rolls, candies and cakes. But above all there is pascha, a specially baked cake, rich in eggs, topped with icing, and decorated with candy crosses or Easter figures. It’s the first thing the family eats after the Easter services. The Easter basket is an integral part of the tradition, for in order to observe the feast properly, people fast all very strictly during Holy Week and abstain from all meat.

The faith of the Russian people under such circumstances was unshakeable and give us pause to consider our own faith and our own observance of Holy Saturday:

All day [Good] Friday, back at the chapel, I heard a tremendous number of Easter confessions, as I had every night that week after work. On Friday evening, together with Ludwig, I set out after Good Friday services to begin my tour of the city. We had to do it all on foot, for the most part, crossing and re-crossing the city to the many little shack-town settlements in out-of-the way places. Every place I went, there were people waiting—and this even in the middle of the night or the long cold hours of the early morning. It was a lot of walking, and the weather was still bitterly cold. Ludwig and I got back to the chapel Saturday morning in time for the services at 6 A.M….After the services I started making the rounds again, doubling back to the chapel every few hours to bless the baskets of food that filled my little bolok from wall to wall, a new batch every time. None of this could be kept very secret, of course. The crowds were too obvious. The people told me the militia had been to the chapel several times asking for me, but they didn’t interfere with the people or say anything about the baskets of food. Forunately, I didn’t see the militia that day; our paths never crossed. By 11:30pm Saturday, I was back home, but I couldn’t get anywhere near the chapel….crowds of people were swarming around outside in the midnight cold. The militia were there, too, but I ignored them. There was barely room to move anywhere, but by twelve o’clock I was vested—I couldn’t lift my arms, so someone had to pull the vestments over my head—and ready for Mass….As I began the solemn intonation of the Easter Mass, I thought the chapel would explode with sound.

To my mind, the reality of Our Lord’s redeeming the just souls in the “Hell of the Fathers” (as distinguished from the “Hell of the Damned”) who had no access to heaven because they lived and died before Christ could accomplish our salvation on the Cross, is made manifest in the Blessing of the Easter Food.

Just as Our Lord went to the souls of those naturally good but sinful, so too he gives priests to His Church to forgive us our sins and bring us to life. Our priests are alteri Christi who raise that which is naturally good to something supernaturally good. In the case of Fr. Ciszek, like Christ, he went to the people held in the bondage of a godless regime to bring them the blessings of grace. Like those just souls, the Easter food is naturally good and are wonders wrought by the creative hand of God. Like the just souls, the Slavic believers (whose custom this is) wait in patient anticipation of the great feast which is the promise of the Resurrection and Heaven—where the sanctuary light is relit, the flowers bedeck the altar, the priest raises his hands in blessing, Our Lord once again pitches his tent among us and we are in His presence. And we, with and in the Church, join together across the veil of time and matter and once again eat with our families, our friends, Our Blessed Lord, the saints and our ancestors–even Aunt Ann.

[Some examples of the Blessing of Easter Food: Latin Rite and Eastern Rite.] 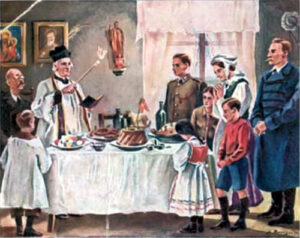 This article, Holy Saturday and The Blessing of the Easter Food is a post from The Bellarmine Forum.
https://bellarmineforum.org/holy-saturday-and-the-blessing-of-the-easter-food/
Do not repost the entire article without written permission. Reasonable excerpts may be reposted so long as it is linked to this page.