Jesus wasn’t good enough for them either, Pope Francis, S.J.

When Pope Francis walked out on the balcony yesterday, I watched and listened as best I could to his Italian. I understood the part where he said they found him at the end of the world, and then I understood his first act: asking everyone to pray for Pope Emeritus Benedict, and then doing so with an Our Father, Hail Mary, and Glory Be. 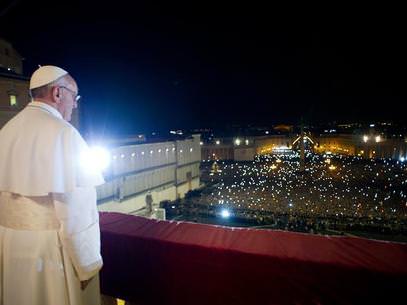 Thanks be to God. That raucous crowd of people hushed down from primal cheers into prayer. The crowd’s cheering had been like Palm Sunday all over again. He tamed them and brought them to God in one quick act. Instantly, he was like John the Baptist, who told us “He must increase; I must decrease.”  This Pope managed to shift the focus to God, and not on the generic celebrity simulacrum infused with cheerful emotion.

Then, in a move that reminded me of Father Hardon, who began anything with his typical command: “Suppose we start with a Prayer.” Pope Francis then asked the tamed crowd to pray for him. I watched the TV coverage and the people were praying.

Father Hardon would then commend the act to the Blessed Mother. This pious and commended practice is an unnoticed Jesuit characteristic. Most people recognize AMDG (ad maiorem Dei gloriam) but only the more attentive can recall the second act, BVMH, let alone recite its meaning: to the honor of the Blessed Virgin Mary (for the record, just a couple weeks ago, Mr. Dejak and I were bantering this very point about on Facebook). Thus, the habit of a well-formed Jesuit, such as Fr. Hardon, is to first pray to God for the grace, and then recommend the results to the honor of His Mother. St. Ignatius and St. Xavier would have it no other way.

It is thus a pattern I recognize, thanks in large part to Fr. Hardon and a few other Jesuits along the way. The next thing I saw Pope Francis do was to mention that he intended to visit the Blessed Mother today. If it would have been possible, I bet he would have done so right then. But his mention of it in this sequence spoke volumes to me.

Then, only then, after having adequately prepared for his endeavor, did he proceed to begin the work of Pope. He put his stole on and imparted the Urbi et Orbi apostolic blessing. I was sold right there. Pope Francis had shown that he is willing to bring the habits he learned in his formation in the rule of the Society of Jesus to bear. He is willing to accept the grace now proper to him as Pope. Whatever else he has been, only now will he get the graces God needs him to have to be Pope. Starting in the manner he did gives me a sign that he intends to cooperate with that grace. It showed in the reaction of the crowd.

A couple of hours later, I read the mess on Rorate Ceoli, a blog frequented by sedevacantists, SSPXers, and traditional Mass goers. I confess, having grown up with a rogue Dominican rite latin Mass that was later made into a 1962 Missal, and later latin, but always chanted Mass, that I read the stuff there a lot. There’s a reason I don’t join the Amish clubs they tend to attract and make soap, though: they have in many ways lost their sense of Jesus and reduced the faith to externals. Not able to comprehend what they just saw happen, they had to start with the sowing of doubt. You might as well say that the tenor of the comments might as well have been cries, “Crucify him! Crucify him!”

The Pharisees did this sowing of doubt based on nonsense, too. Of Our Lord, they said He was a drunkard (winebibber), that He hung out with hookers, that His apostles failed to keep the rites and practices properly (such as washing their hands the right way), or even that He broke God’s law by healing people on the Sabbath (I’m sorry but that still cracks me up — the hubris of these idiots). What I found most strange was that it happened within hours. You’d think they would have at least waited for the Ides of March, that famous day of Roman history when the leader gets stabbed in the back by his best men. No, they had to jump on the case and be first out of the gate.

Then, today, I see Pope Francis take flowers to the Blessed Mother and leave them for her. I also read his homily (which we posted here). If you haven’t read the homily yet, or heard others praise it for having a sharp edge like the words of Christ, go read it for yourself. It outlines what he intends, and he’s onto a good path. (I do hope he causes the USCCB to revert to translations of Holy Scripture that have language as clear as his, not the tripe we are force-fed at Holy Mass… after all, what good is the latin if the readings used are vacated of sense and meaning? but that’s another discussion for another day).

Throughout the day, however, I have seen more and more “Important Catholics” not just the traditionalists coming out with the daggers and sowing doubts. I refuse to link to these idiots. You’ll see it being passed along. I will however, acknowledge a post on this very topic from Dr. Taylor Marshall here. All I can say to him is, welcome to the club — this has been my complaint for decades now. When Dr. Marshall comes to the realization that I did years ago, that Jesus Himself appearing to them would not satisfy them, he will have arrived.

Today’s Gospel Says it All

This very point comes from the reading of the Mass Gospel, today, however (John 5 31-47). Even the inane translation employed by the USCCB from the ICEL (which I am convinced stands for Inflectere Christus Ex Liturgiam) makes enough sense to convey the point: God Himself was not good enough for the Pharisees — they were more important than Him. In it Jesus declares:

Moreover, the Father who sent me has testified on my behalf.
But you have never heard his voice nor seen his form,
and you do not have his word remaining in you,
because you do not believe in the one whom he has sent.
[…]
I know that you do not have the love of God in you.
I came in the name of my Father,
but you do not accept me;

Jesus didn’t do things the Pharisees expected. His Vicar, Pope Francis, apparently doesn’t either. I heard people complain that he didn’t have his pectoral cross on, that he didn’t chant the blessing, that he didn’t act papal. There’s a lot more. All of it is supposed to be a sign that he’s going to be an awful pope. It’s like the people of Jesus’s time — they said Jesus couldn’t be the Messiah because the real Messiah would do [X]. [X] was whatever image they projected on God. Some wanted a politician to remove the Romans. Jesus didn’t do that, so they refused to believe Jesus was God. Others wanted a super-pharisee. Jesus wasn’t a normal pharisee, so they didn’t believe He was the Messiah. The lists went on. It was so bad that Jesus had to laugh in His sleeve when he asked Peter who the people said He was and none of the answers were “God.” In fact, people said everything but– they said Moses, Elijah, etc… In other words, they gave Him a nice title to be polite, politeness isn’t always charitable, but they refused to admit who He was.

Doesn’t God Have Anything to Do with this?

Sadly, they do that to the Pope now, the Vicar of Jesus. They want him to do [X]. They aren’t willing to wait and see what God will have Him do, what God wants to do for His Church through the Pope. Instead, they are already declaring him to be a disappointment. The Pope hasn’t even been pope 24 hours! Given today’s reading, I can’t help but to think that Pope Francis really is like Jesus in that his own reject him and insult him. I’m glad he prayed for grace from the start, as it appears that this Pope’s cross is coming from his own people.

For now, however, all this doubt sowing is ill-warranted and frankly borders on suspicion, as in the sin of suspicion. It’s sad that he’s been pope a little over a day and he’s already getting chewed up. Are Catholics that ignorant of God’s power today? They all talk about grace and talk like they know how to get it — could they not see that this Pope actually does it? Don’t you think God will tap him on the shoulder if he’s supposed to do something better? That’s why we pray for the Pope. Instead, it appears people are griping about his future pontificate on his first day as Pope — no wonder this pope is already being declared as the Pope of charity! Apparently, we really need a Pope to teach us that!

This article, Jesus wasn’t good enough for them either, Pope Francis, S.J. is a post from The Bellarmine Forum.
https://bellarmineforum.org/jesus-wasnt-good-enough-for-them-either-pope-francis-s-j/
Do not repost the entire article without written permission. Reasonable excerpts may be reposted so long as it is linked to this page.