Living A Catholic Life: What the Ratzinger Family Can Teach Us 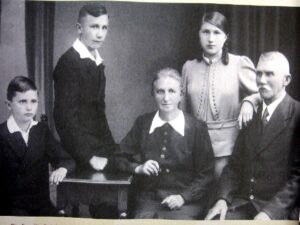 March 1, 2012 saw the publication in English of Msgr. Georg Ratzinger’s new book My Brother, the Pope. Media outlets have widely reported this ultimate insider’s view of Pope Ratzinger and have published excerpts from the book. Of particular interest to this writer was Msgr. Ratzinger’s recollections of his childhood with his younger brother. The traditional piety with which they practiced the faith may strike some of us modern Americans as strange, but it is instructive. This type of traditional piety is something that we must rediscover if we wish to grow in holiness in our own families; and it is an essential to prepare for the dark clouds of persecution that gather day by day.

Though we are in the season of Lent, dear readers, indulge me as I quote Msgr. Ratzinger’s recollections of Advent and the Ratzinger family’s participation in the rich liturgical life of the Church:

Generally speaking, our family made a big thing of Christmas. The preparations already began with the First Sunday of Advent. At that time, the Rorate Masses were celebrated at six in the morning, and the priests wore white vestments. Normally violet is the color of the vestments in Advent, but these were special votive Masses that were supposed to recall the appearance of the Archangel Gabriel to the Mother of God and her words, “Behold the handmaid of the Lord, be it done to me according to thy word” (Lk 1:38). That was the main theme of these “liturgies of the angels,” as they were also called, in which the appropriate passage from the Gospel of Luke was read. After we started school, we used to attend these Masses in the early morning, before classes began. Outside it was still night, everything was dark, and the people often shivered in the cold. Yet the warm glow of the sanctuary compensated for the early rising and the walk through snow and ice. The dark church was illuminated by candles and tapers, which were often brought by the faithful and provided not only light but also a little warmth. Afterward we went home first, ate breakfast, and only then set out for school. These Rorate Masses were wonderful signposts leading us to Christmas.

We often associate the spiritual with the material; immutable things with mutable ones; the things of God with the things of the earth. Our recollections of experiences with the important things oftentimes coincide with particular places, persons, experiences, sounds and smells that remain with us long after the moment has passed. We are not angels and therefore we know things through our senses. How important then is it to provide these opportunities to our families: engaging their senses with things that point to deeper realities. The Church has always done this and she continues to do it: beautiful music, beautiful architecture, beautiful art, the rhythms of the liturgy and the seasons, and the witness of the saints themselves in their various circumstances and times. Our job is to take advantage of these rich traditions and make them available to our children and family members as a means of growth in personal holiness and as a means of transmitting the faith.

This is why pious traditions are so important. The maintenance of these traditions is essential for building a strong faith and a holy family. What a juxtaposition that Msgr. Ratzinger shows us: the dark, snow and ice of an Advent morning causing the faithful to shiver giving way to the warm glow of the church sanctuary with its candles and tapers. Body and soul are engaged together in an understanding of the great mysteries of our Faith. From the darkness and cold of an inhospitable and sinful world to the light and warmth of the coming of God as a child in Bethlehem.

The Church’s liturgical year provides many opportunities to cultivate traditional pious devotions. A double tragedy of the poor and confused implementation of the Second Vatican Council was the erroneous notion of some that these traditional devotions have no place in the life of a “modern enlightened Catholic” or—for those who wanted to practice these traditional devotions—the mistaken notion that the institutional Church had abandoned or no longer promoted these customs. Nothing could be further from the truth. Indeed, the various cultural expressions of piety and devotion must be maintained to inspire a lively faith. As Blessed John Paul II said:

Within the Catholic home – the domestic church – we may make use of pious practices, objects and various traditions to join with the Church in living the liturgical year. By making use of customs, traditions, and devotional practices, parents, as first teachers of their children, will be building up the “little kingdom of heaven” that is their home.

What do we do to make our homes a “little kingdom of heaven?” Do we reflect upon our heritage and seek to maintain centuries-old traditions? Do we pray the prayers our ancestors prayed? Do we learn traditional blessings and prayers to help us sanctify time? On a widespread scale, the answer is obviously: No. Msgr. Ratzinger laments this as it has greater ramifications for the larger Church and world:

I am convinced that the lack of this traditional piety in many families is also a reason why there are too few priestly vocations today. Many people in our time practice a form of atheism rather than the Christian faith. In some respects, they may maintain a sort of vestigial religiosity; perhaps they still go to Mass on the major feast days, but this rudimentary faith long ago ceased to permeate their lives, and it has no bearing on their everyday routine. It starts with sitting down at table and beginning a meal without even thinking about prayer, and it ends with no longer coming to church regularly on Sundays. Thus, an almost pagan way of life has taken root. If there are no religious practices even in family life, then this has an effect on all the rest of human life. I often speak with brother priests, and in almost all cases it seems that they prayed regularly as a family and went to Mass together. This then shaped their whole lives and directed them toward God. Thus, their vocation fell on fertile soil.

A practical suggestion to increase devotion within the home is daily family prayer and the reliance and trust upon the family’s (or individual’s) patron saint. The life of the Ratzinger family is instructive. Again, Msgr. Ratzinger:

From our parents we learned what it means to have a firm grasp of faith in God. Every day we prayed together, and in fact before and after each meal (we ate our breakfast, dinner and supper together). The main prayer time was after the mid-day dinner, when the particular concerns of the family were expressed. Part of it was the prayer to Saint Dismas, the “good thief,” a former criminal who was crucified together with Jesus on Mount Calvary, repented on the cross, and begged the Lord for mercy. We prayed to him, the patron of repentant thieves, to protect Father from professional troubles.

Being a policeman, after all, was a rather dangerous profession, and we were often very anxious about Father. Especially when he worked the night shift and had to walk the beat. When a misdemeanor or a crime had occurred in the area he patrolled, it was his duty to investigate it. Father often worked at night, and then it could happen that he was held up, for whatever reasons, and came home later. Then, naturally, we children and Mother were anxious and prayed that nothing had happened to him. So, of course, our prayer life was always marked by concern about Father. When we were children, our parents also put us to bed and prayed our evening prayers with us.

Living the liturgical year, celebrating with gusto the feast days of the Church, and a lively devotion to the saints can bring us closer to God and gird us for life in this hostile world. It is a gift of Pope Benedict XVI that greater access to and interest in the traditional pious practices of the Roman Church have made a comeback. Indeed, to be precise, it is his own efforts in conjunction with those many Catholics—lay and clergy—who throughout the years have maintained these traditions and customs. It is a great joy that many more young people are seeking these traditional practices today and rejecting both the liberal watered-down non-challenging faith peddled to them in the name of Vatican II and the pseudo-orthodoxy of “acceptable” conservative Catholicism that one often finds. Indeed, the pope, in addition to formal teaching, has made fine use of the media in showing us the way of beautiful devotion and liturgical practice to aid us in our faith. Most importantly, it is the Ratzinger family and those like them who have given us the best example of holiness and devotion, such that the world will once again be consecrated to Christ.

This article, Living A Catholic Life: What the Ratzinger Family Can Teach Us is a post from The Bellarmine Forum.
https://bellarmineforum.org/living-a-catholic-life-what-the-ratzinger-family-can-teach-us/
Do not repost the entire article without written permission. Reasonable excerpts may be reposted so long as it is linked to this page.