Spaceballs, Babylon, and the Lenten Sacrifice

Like many Catholics, you may be making a last-minute scramble to choose a Lenten sacrifice.  But in the rush to make your public penance, have you considered why you make this yearly ritual?  Believe it or not, you might get a better understanding of the Lenten sacrifice by watching the sci-fi comedy Spaceballs.

The protagonists are fleeing from the evil Lord Helmet when they crash-land on a desert planet.  Needing to find shelter, the heroic Lone Starr tells the spoiled Princess Vespa that she can only bring the essentials with her on their journey.  The problem is that Vespa travels with a lot of baggage—literally—and she’s insistent that it all come along.  After carrying the ridiculous luggage through the sand, a frustrated Lone Starr opens her massive trunk and discovers an enormous hairdryer.

Lone Starr: What’s this? I said take only what you need to survive. 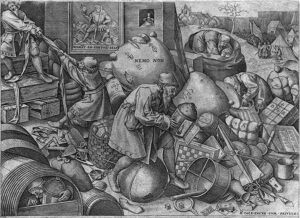 Everyman had to determine what worldly possessions to take on his final journey.

Vespa: It’s my industrial strength hairdryer, and I CAN’T LIVE WITHOUT IT!

After much argument, the hairdryer is abandoned and ultimately not missed.

Absurd as this scene is, it represents a certain reality: we all carry our own mammoth hairdryers that we “can’t live without.”  Maybe it’s sweets, or tobacco, or a favorite television show, or Facebook.  Whatever it is may not be essential to life, but we’ve become so comfortable with it that we’d probably have a Vespa-sized tantrum if we had to leave it behind.

Surprisingly, the Catholic Church doesn’t actually require a Lenten sacrifice beyond the Lenten fast.  There’s no explicit commandment to give up a material good in the Bible or the Catechism.  The closest thing you’ll find to an obligation is in the Code of Canon Law:

Can. 1249  The divine law binds all the Christian faithful to do penance each in his or her own way.  In order for all to be united among themselves by some common observance of penance, however, penitential days are prescribed on which the Christian faithful devote themselves in a special way to prayer, perform works of piety and charity, and deny themselves by fulfilling their own obligations more faithfully and especially by observing fast and abstinence…. (Emphasis added.)

Can. 1250  The penitential days and times in the universal Church are every Friday of the whole year and the season of Lent.

Penance is required during Lent, but the form is a matter of personal choice.  Nonetheless, the sacrifice has become tradition, sort of the Catholic version of the New Year’s resolution.

Even though there is no specific requirement obligated by the Church, however, Biblical history shows that it’s good to deny ourselves.  Recall that before he began his ministry, Christ spent 40 days in the isolation of the desert (Lk. 4:1-13).  But why 40?  Some say that it reflects the 40 years of the Exodus, but perhaps Jesus had another period in mind: the 40 years of Babylonian exile.

A little background is in order.  When the Hebrews fled Egypt, they likely did so in poverty.  They left with whatever meager possessions they could carry, spending 40 years as a nomadic people.  Eventually they came to settle in Canaan, and within 200 years developed a civilization.  By 1,000 B.C., David and Solomon’s monarchies had turned Israel into a wealthy and prosperous nation.  The problem was that with wealth came contempt;: Solomon began to allow pagan worship in the kingdom, and sin prevailed throughout the land.  Less than a century later, God punished the kingdom by allowing it to be split into two smaller nations: Israel in the north, and Judah in the south (1 Kgs. 12:1-20).

In 721 B.C., Israel had become fairly sinful, and God allowed it to be destroyed by an invasion from Assyria.  Judah and its capital city of Jerusalem, spared through divine intervention, repented—but this reform didn’t last.  Prosperity and safety had made them complacent.  A new arrogance arose: they believed that because God had given them a monarchy (divinely appointed), a temple (where God himself dwelt!), the Ark of the Covenant (the source of law and military power), and the city of Jerusalem itself, they were free to live as they pleased.  Religion became more outward ritual than internal conviction.  Ironically, one of the things the prophets warned against was meaningless sacrifice (Hos. 8:1-14; Is. 1:11-17).

Judah was proven wrong when Babylon conquered the region in 587 B.C.  The city was destroyed, the king murdered, the temple sacked, and the Ark lost.  Worse, much of Judah’s population was deported over 600 miles to Babylon.  For the next 40 years, the exiles lamented the loss of their home and wondered whether God had abandoned them.

He hadn’t, of course.  In a sense, God had felt it necessary to strip his people of everything they cherished in order to remind them what—or who—really mattered.  He wanted to return them to the poverty of the Exodus, where they relied solely upon on him.  The exile wasn’t just a punishment; it was an opportunity for a renewal of God’s covenant with his people:

(Hos. 2:16-22).  God hoped that by the exile’s end, the Jews would forget the possessions that weighed them down.  They might not even remember the all-powerful Ark which represented their military might and had destroyed armies.  (Jer. 3:14-16)  God’s message to the Jews was simple.  You don’t need the king, the city, or the Ark to survive; what you need is me.

Jesus may have been strengthening his own relationship with the Father during his 40 days in the desert.  Like the Jews in Babylon, Jesus lacked his own creature comforts in the desert.  Scripture tells us that he was “tempted by the devil” and that he “ate nothing during those days.”  (Lk. 4:2)  The difference between Jesus and the exiles, though, is that he undertook the penance willingly.

Jesus knew that the material world only provides limited sustenance: “One does not live by bread alone.”  (Lk. 4:4)  Maybe he was anticipating the crucifixion, where he would lose everything: his friends would abandon him, his strength fail him, and even in his last moments, he would thirst.  In the end, though, he placed himself entirely in God’s hands (Lk. 23:46).  The 40 days in the desert could have been preparation for his coming trials, a casting off of those things that wouldn’t help him in the end.

In planning your Lenten sacrifice, try to identify your oversized hairdryer.  What seems all-important now is something you’ll eventually lose, whether through choice, misfortune, or death? Lent is an opportunity to embrace material loss: to re-prioritize and remember that although the material world is a gift from God, it’s only temporary.  Our relationship with God, however, lasts forever.

Major Adam E. Frey is a judge advocate in the United States Air Force.  He is a graduate of Villanova University and the Ave Maria School of Law, and is a current student in the University of Dallas’ Catholic Biblical School.  He resides in Louisiana with his wife and daughter.

This article, Spaceballs, Babylon, and the Lenten Sacrifice is a post from The Bellarmine Forum.
https://bellarmineforum.org/spaceballs-babylon-and-the-lenten-sacrifice/
Do not repost the entire article without written permission. Reasonable excerpts may be reposted so long as it is linked to this page.