Of Lent Past, when Fasts Meant Fast, see what we’ve lost 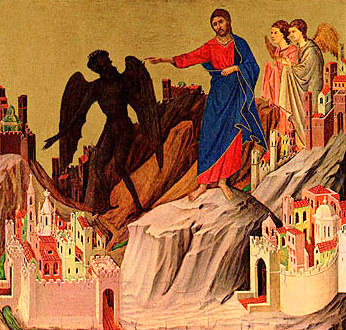 From time to time I think there’s merit to re-evaluate where we are today against practices of the past. To comb the deposit of faith for gems that can illumine why we do things. Now that pre-lent is nearly gone, and we enter lent proper, I’m posting some passages about lent published in 1890 for your edification.

Why are there forty days in lent, and what is the basis?

In a section on the public life of Christ, our ancient text reads:

The Public Life of Christ.

1. When Christ was thirty years old, He was baptized by John in the Jordan (Matt. iii. 13), and fasted forty days in the desert, where He was tempted by the devil (Matt. iv.).

All apostolic men have sought retirement before entering on their mission, e.g., Moses, John the Baptist, and the apostles before the coming of the Holy Spirit. By His fasting and His victory over the devil Christ would satisfy for Adam’s self-indulgence and defeat in the garden of paradise. The number forty has a special significance; it rained forty days on earth at the Flood, Moses and Elias fasted forty days, the Ninivites had forty days in which to repent, Christ dwelt on earth forty days after His resurrection, the Jews wandered forty years in the desert. The forty days of Lent are intended to commemorate the fasting of Christ; they begin with Ash-Wednesday and continue till Easter. During this time those who are of age should take only one full meal a day, and all Christians should avoid boisterous amusements and meditate on the sufferings of Christ. Thus sermons are preached on the sufferings of Christ; on Passion Sunday the images in the church are veiled and the priest says Mass in purple vestments. The three days before Ash Wednes day are called Shrovetide, and in order to divert the faithful from vicious pleasures it is usual in some places to have Exposition of the Blessed Sacrament.

So, forty days is based in biblical events and significance. Repentance is the key and retirement. Repentance is turning one’s thoughts, focus, and practices back to God, among other things. Retirement is some aspect of introspection on one’s thoughts, focus, and practices. It goes without saying that you must pray. Jesus went to the desert to pray.

I emphasize prayer, mostly because there something for you to find in lent. Here’s a hint from our old text:

The action of the Holy Ghost on the souls of men is not constant, but occasional.

Hence the exhortation of St. Paul: ” Now is the acceptable time; behold now is the day of salvation” (2 Cor. vi. 2). Compare the parable of the vineyard where the workmen received only one summons (Matt. xx.). Times of special grace are the seasons of Lent or when a mission is being given, or the jubilee year. These times of grace are like the market-days when things are easier to obtain; with this difference, that no money is required. ” Come buy wine and milk, without money, and without any price” (Is. iv. 1).

I love the implication of the quote:  it’s like a black friday sale on graces that lasts forty days! The rest of the time you need to pay for grace. Grace isn’t cheap, just look at a crucifix for proof. Nevertheless, Lent is a fire sale for graces!

The forty days of Lent are the preparation for Easter; and the Paschal time lasts during the subsequent forty days before the ascension.

The preparation for Lent includes the three Sundays called re spectively Septuagesima (70), Sexagesima (60), and Quinquagesima (50). They were so named because in the early days of Christianity many communities began the fast fifty, sixty, or seventy days before Easter, in order not to have to fast every day of the forty. The Wednesday after Quinquagesima is called Ash Wednesday, because of the ceremony of sprinkling ashes upon the foreheads of the faithful. On Ash Wednesday the season of Lent commences; it is forty-six days before Easter; thus the number of days is completed without the six Sundays, on which we do not fast. During Lent the public life of  Our Lord is set before us, His previous fast, His Passion and death. […]

Again, I emphasized the sentences in the paragraphs to point something out. Fasting forty days! Who does that today? It’s described above as “tak[ing] only one full meal a day, and all Christians should avoid boisterous amusements and meditate on the sufferings of Christ.”

It’s a little more involved back then. Read the old fasting rules to realize just how much tradition we’ve lost in the past few decades.

The laws of the Church in regard to fasting are in reality very strict; they have, however, been largely relaxed by the bishops to suit the exigencies of time and place.

The rule of fasting was originally so stringent that on the fast days not only was abstinence from flesh-meat enjoined, but milk, eggs, and butter were also prohibited; and no food was to be taken before sundown. But owing to the increase of constitutional weakness, and still more because of the spread of religious indifference in the course of centuries, the rule has been more and more relaxed. Bishops are empowered to prescribe, each for his own diocese, on what days meat is permitted. Hence the rule varies in different dioceses […]

There are three kinds of fasting at present: (1), Abstinence from flesh-meat; (2), Taking one full meal only in the day; (3), Strict fasting, in which both of these are enjoined.

In the second commandment of the Church we are ordered to abstain on all Fridays of the year; and to fast during the forty days of Lent, on the Ember days, and on the vigils of certain feasts.

1. We are forbidden to eat meat on Friday, because on that day Our Lord died for us.

Not only is meat prohibited, but all dishes in the preparation of which it enters. Fish, turtle, and shell-fish may be eaten, also eggs, milk, and butter, in almost all countries. The Church has forbidden the use of meat because Christ sacrificed His flesh for us; also because meat is an article of food easily dispensed with, and yet what men generally like best. Another reason is to remind us that the lusts of the flesh are to be resisted (Gal. v. 19), and these are fostered by eating meat. Some people quote Our Lord’s words: “Not those things which go into the mouth defile the man ” (Matt. xv. 11), as opposed to this prohibition; but He also said: ” The things that come from the heart, those things defile the man” (Matt. xv. 18). Disobedience to the Church comes from the heart, and this it is which defiles, not the actual meat. If Christmas Day falls on a Friday, meat is allowed, because Our Lord would not have us fast at a season of rejoicing (Matt. ix. 15).

In early ages the use of meat was also forbidden on Saturdays.

In the early ages…  Comparing the practices of just 100 years ago to today makes the norm then to look just as rough as the early ages!

Today, the Latin Rite has relaxed enough on the laws that none of the strict fast is really required as it was way back 100 years ago, but you’re free to try it yourself. Explaining the history of the practice of fasting, our ancient text says:

2. During the forty days of Lent only one full meal is to be taken, as a partial imitation of Our Lord’s fast of forty days, and as a suitable preparation for celebrating the festival of Easter.

The forty days of Lent begin on Ash Wednesday, and last until Easter Day; the Sundays alone are not fasting days.

The Lenten fast was instituted by the apostles in commemoration of Our Lord’s fast in the wilderness (Matt. iv.). It is a time of penance and of sorrow for sin; hence violet vestments are worn at the altar. It is natural to fast when we are in grief (Matt. ix. 15). We ought also during Lent to meditate upon Our Lord’s Passion, which is commemorated in Holy Week, and which usually forms the theme of the Lenten sermons. By fasting and meditation upon Our Lord’s Passion we most readily awake within ourselves the grace of contrition and consciousness of sin. The forty days of Lent are also a preparation for the Easter festival. In early times the fast was much more rigorous; the primitive Christians ate no meat all the time, and did not break their fast until the evening. Even in the Middle Ages meat was prohibited; those who ate it were not admitted to the paschal communion (Council of Toledo, 653). Those who broke this law were punished by the secular authority on the ground of contempt for religion. The rule of fasting is made very easy nowadays. All that the Church requires of us is to take only one full meal in the course of the day; a slight refection is permitted in the morning, besides the evening collation. Drinking does not break the fast; yet we must only drink to quench our thirst, not in order to compensate for privations in the way of solid food. No one is required to keep the fast of Lent who has not attained the age of twenty-one years.

I emphasized the part about that fast being “very easy nowadays”! Comparing it today, where there appears to be no restriction of amount of food eaten except on Ash Wednesday and Good Friday, and no limitation of variety of food, except for the fish on fridays, we have it even easier!

I post these passages so that you may see some history of lent, but also to inspire in you some ideas for your lent this year. Relax in the sure thought that you are not under Church law to do the strict fast under penalty, but instead look at it as a possibility of obtaining some of those free graces!

So, I hope you don’t fret worrying what you will give up this lent. Hopefully, I’ve inspired you to engage in some of the traditional lent practices of fasting and abstaining, no just from candy bars, but for a purpose and with vigor!

This article, Of Lent Past, when Fasts Meant Fast, see what we’ve lost is a post from The Bellarmine Forum.
https://bellarmineforum.org/of-lent-past-when-fasts-meant-fast-see-what-weve-lost/
Do not repost the entire article without written permission. Reasonable excerpts may be reposted so long as it is linked to this page.