For the Love of St. John 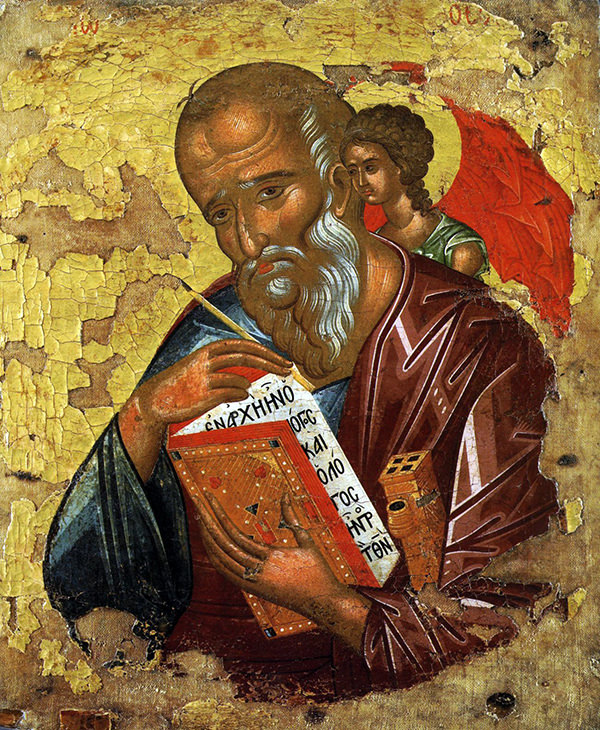 Today, we celebrate the feast of St. John the Evangelist. He is the “Beloved Disciple,” the son of Zebedee, brother of James, who was allowed to rest on the breast of Jesus during the Last Supper. St. John is the author of the Fourth Gospel, 3 Letters, and the Book of Revelation. He is the only disciple who was with our Lord at the crucifixion, and because of that, he did not die a martyr’s death. However, many theologians suggest that, like Our Blessed Mother, his witness to the crucifixion was a martyrdom. From the cross, Our Lord gave him the care for Our Blessed Mother, which he dutifully carried out until her blessed Assumption. Tradition states that he took her to Ephesus in what is now modern day Turkey. During the persecutions under Emperor Domitian, he was exiled for a time on the Island of Patmos, where he wrote the Book of Revelation. When Nerva became Emperor, he was pardon and returned to Ephesus where he lived the remainder of his life. It was in Ephesus that it is believed that St. John wrote his gospel.

The death and burial of St. John is clouded in mystery. He is the only apostle whose remains have never been claimed by anyone at any time. There is no body, no relics. One legend says that he was bodily assumed into heaven. Our Lord appeared to St. John, along with the other apostles, and said:

Come, my beloved one, and join me and all other brethren of thine at my table; the time has finally come to do so,…the Sunday next, thou wilt come to stay henceforth with me.

The following Sunday, he entered into a cave and a bright light shone, preventing St. John’s followers from entering in. When the light dissipated, so did St. John. It’s a fascinating legend when one takes into consideration how St. John’s gospel ends.

When Peter saw him, he said to Jesus, “Lord, what about him? Jesus said to him, “What if I want him to remain until I come? What concern is it of yours? You follow me.”

So the word spread among the brothers that that disciple would not die. But Jesus had not told him that he would not die, just “What if I want him to remain until I come? [What concern is it of yours?]”

Nevertheless, a mausoleum of sorts was built on the site in which he “died”, but during the reign of Constantine, a church was built. During the construction of the church, the tomb was opened and found empty, only fueling the legend that St. John had been assumed into heaven. But in the tomb, there appeared a peculiar dust, which was called “manna”. This manna was believed to have healing power and was responsible for curing many ailments. So powerful were the testimonies of these miraculous cures, that even St. Augustine believed in it.

In the 6th century, during the reign of Justinian I, a basilica was built. At the time, it was one of the most beautiful basilicas in the world and a major pilgrimage site. However, it was destroyed when the Muslims invaded, and all that remains today is the site of his tomb.

Saint John and the Wine

Throughout the centuries, it has been traditional for people to bring wine to church on St. John’s feast day, to have it blessed by a priest. The reason for this is that it is believed, during St. John’s exile, his enemies tried to poison his wine, but he made the sign of the cross over it, said a blessing, and was able to enjoy it unharmed.

However, for me, blessing wine on his feast day makes me think of one of the most beautiful passages in his gospel, the Vine and the Branches. The metaphor of the vine and the branches underscores Jesus’ union with the disciples and their absolute dependence on him for life and growth. The vinedresser is the Father, Jesus is the vine, and it is only those branches (the disciples) who are pruned and grafted on to him that will bear fruit – the fruit being followers of Christ. The branches cannot bear fruit unless it abides on the vine. If it does not, it will wither and be gathered and thrown into a fire and burned.

On the Vineyard and the Vines

The image Jesus presents was very familiar to the first century followers of Christ. Throughout the Old Testament, Israel is depicted as the vineyard planted and tended by the Lord. In the fifth chapter of Isaiah, we have the Song of the Vineyard, in which is he says:

Now, inhabitants of Jerusalem, people of Judah,
judge between me and my vineyard:
What more could be done for my vineyard
that I did not do?

When Jesus dresses himself in the same imagery, He is stressing that Israel finds its life no longer in the Old Covenant but in the New Covenant ratified by the Messiah. The metaphor of the vine and branches takes place during the Last Supper, therefore, it is apparent that there is a Eucharistic “coloring.”  Throughout the narrative, Jesus tells us to “abide in Him”. He uses this same language in the Bread of Life discourse in John Chapter 6. The Synoptic Gospels also make a link between the “fruit of the vine” and the Eucharistic meal. (Mt 26:29, Mk 14:25, Lk 22:18).

The relationship we now have with God is one of intimacy. Just as Jesus Christ abides in the Father, so we abide in Christ. St. John later tells us in his letter that “God is love” (1 John 4:8). We too are grafted into this relationship and share in the divine life of love, of God. Dare I even say that if we abide in Christ, we too become “divinized”. It is no longer a vassal relationship that God has with His people, it is one of friendship, of divine adoption.

So, today on the feast day of St. John the Evangelist, we gather around our dinner table with family and friends, and drink the blessed wine with the toast “I drink to you the love of St. John”.

This article, For the Love of St. John is a post from The Bellarmine Forum.
https://bellarmineforum.org/love-st-john/
Do not repost the entire article without written permission. Reasonable excerpts may be reposted so long as it is linked to this page.