For years, at least 10, more like 20, I’ve been astounded at how few people are at Mass. I’ve lived in Big cities. I’ve seen a few parishes with high attendance, but been scandalized by the degraded carnival-like parade of busybodies to which some of those had devolved. In the middle of all of that, there is something going on.  There is an interesting phenomenon developing in Detroit, and they are calling it a “Mass mob.”

Somewhere in this is the recipe of mixing Ice Bucket Challenges, the desire to be seen, but also a cool cultural factor — I think that’s the draw. These are cultural churches. I’ve made comments about the power of culture before. See the picture on American Catholic: 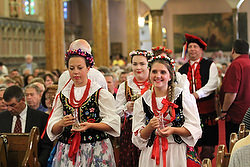 I think people know that the folk culture and culture in general is missing. However, somewhere in the #icebucketchallenge world, culture is degraded into a spectacle. You might say instead of being authentically Polish, such a parade can sometimes be a view of “Polishness.”  Moreover, the same of these spikes in Mass attendance could be a fad of seeing the spectacle of “Catholicness.”  That’s the problem of the Amercian Church for forty years:  it has been reduced to a caricature and put on a viewing table and people embellish the desired view of “Catholicness” that they want. Unfortunately, as we are painfully aware, some of the most successful have been the gnostically-inspired hippies.

Nevertheless, the spectacles have been drawing crowds. Reports American Catholic:

But he said despite the fact that parishes can desperately use the increased collections — Sweetest Heart of Mary’s Mass mob raised $23,000, or 11 times its usual Sunday total — “the goal isn’t just to have everybody show up one Sunday for church.”

“It’s to bring people back to their faith, and I’ve seen that happen,” Mann said. “The church I attend regularly, St. Charles Borromeo, we have had an increase in attendance (since the Mass mob). It hasn’t been 400 every Sunday, which I would love to see, but we usually get about 100, and last Sunday we had about 150 people there.”

I hope it’s not merely a fad, but the last twenty years have shown me that fads and cults rule the day. Tradition, and the power of living the culture of the Church have all but been left on the curb.

There’s a lot of meat to be discussed in this topic. For me, I’m not as excited about 2000 people showing up to see a gimmick, I’ve seen that before, over and over. I applaud the effort, but to what are we really bringing these people? Aren’t they going to be served the same sterile AmChurch that created the low census to begin with? Where do they go when the spectacle gets old? Back to the twitter feed and next social phenomenon?

This article, ‘Mass mob’ reveals the Truth about AmChurch is a post from The Bellarmine Forum.
https://bellarmineforum.org/mass-mob-reveals-the-truth-about-amchurch/
Do not repost the entire article without written permission. Reasonable excerpts may be reposted so long as it is linked to this page.