Another thing I’ve seen over and over for the past twenty years and more is the politely stated, politically correct, and sensitive velvet glove that is worn on the outside of a giant destructive machine known as AmChurch.

These guys come in with a smile and speak of pastoral needs, concern for the poor, and the bishop and such, and have a way of alienating people who love the Church and the gifts that beautiful churches are to the poor and needy. I’ve seen it in the past when a guy comes in and what starts off as renovating the painted images, ends up in statues being tossed, candles replaced with electric lamps. I’ve seen worse where the high altar was destroyed and the church rendered into the pagan-inspired church in the round design. (uggh).

In the 70s and 80s, these guys would whitewash and entirely obliterate. In the 90s, they were slightly subdued. Today, they seem to have this half-approach. The primary target is the alter rail and high altar (if it remains) and any artwork except for the minimum. Have no reservations, however. Destroying the altar rail and the artwork and statues is still wreckovating. period.

I don’t know what is happening precisely at Our Savior Church in New York, but this report came yesterday by way of Fr. Z’s blog. Artwork is being ripped off the walls. 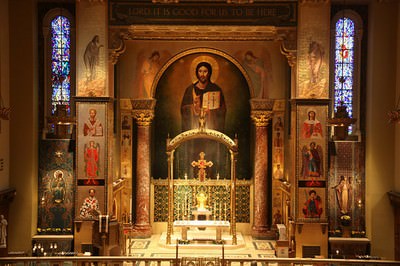 AFTER (note the emptied columns): 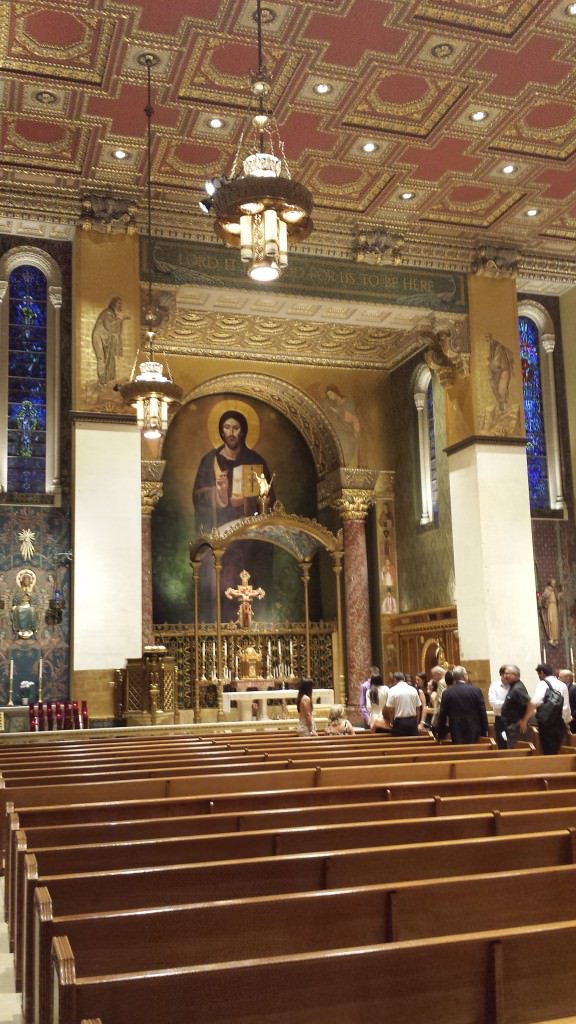 I was told at one point that the altar rail was slated for demolition. However, as one person clarified for me, the workman only cleaned it. When people had seen workmen concerning themselves with the rail they protested to the Archdiocese. Fr. Robbins thereafter said that it was not ever his intention for it to be removed. Or so it goes.

via NYC – What’s up at Our Saviour Church where Fr. Rutler used to be pastor? | Fr. Z’s BlogFr. Z’s Blog.

Fr. Rutler was at this parish for about 12 years. His August 2013 farewell to the parish is posted on a bishop’s blog, here. I want to highlight something here…

LOOK at the BEFORE of that Church. Earlier today, I wrote about the Mass Mob spectacle in Detroit.  I noted that phenomenon is mere stage tricks and that the day to day pastoral care of the parish is what will bring sheep back (particularly making confessions available all the time). I enter Exhibit A from Fr. Rutler’s farewell:

Since 2001 our flock has doubled, and there have been among them nearly a dozen who have been called to the priesthood. While I am the only priest in this parish, the visiting priests who assist in various ways have been a great support. I have heard in these twelve years possibly around 45 or 50 thousand confessions, and my fellow priests may have doubled that. […]
The volunteer faculty of our CCD classes, which have grown ten-fold, could more than match the finest of any school, and young people come from long distances for the Pre-Cana program which is unsurpassed for its sound teaching of the joy of true marriage. The holy Liturgy has been accompanied year after year by our music director and choir.
[…]
The good people of our parish, along with our extended family far and wide, have sacrificed to change the financial situation of this parish. Twelve years ago we were burdened under millions of dollars of mortgage and other debts and costs for the repair of a building in which everything seemed to be collapsing at the same time. All that has been reversed, every penny of debt is paid, and the church has virtually been reconstructed, along with the installation of a new organ and many other improvements, renovations and fine art. Our Lord was not fortunate in the one he chose to hold the moneybag, but the same Lord mercifully sent me trustees whose selfless devotion in these challenging years will bring them a reward more than I can give. There may have been times when my concern about the dire financial situation of our church made me seem, in the vernacular expression, cheap.

Read that the way I did:  the parish was thriving without gimmicks. Fr. Hardon and I would agree that the 50,000 confessions had something to do with that. Then read the next thing I saw:  SACRIFICES to make the church beautiful and fully restored.

This new guy is destroying the sacrifices of those who came before him.

No matter how many times I’ve seen it, and myself seen something I sacrificed to restore or support trampled underfoot, the smiles of the AmChurch and its social concern for the poor is always shown as mere sacrosanct hypocrisy when they wreckovate a church. May God have mercy on us.

That’s the meat grinder of AmChurch:  you are lectured about concern for the poor, pastoral care, charity, and the need to advance the faith. Meanwhile, with the other hand, the things of faith are destroyed.

Speaking of the destruction, last September, a mere month after Fr. Rutler was moved out, the Latin Mass was ended, as was reported on First Things.

And that’s the way it goes — things of beauty are ground into a dry pulp, and people can’t figure out why no one goes to Mass anymore. 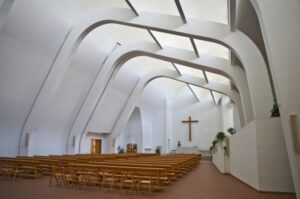 This article, Who Needs Isis? AmChurch Meat Grinder Hitting Our Saviour Church NYC? is a post from The Bellarmine Forum.
https://bellarmineforum.org/who-needs-isis-amchurch-meat-grinder-hitting-our-saviour-church-nyc/
Do not repost the entire article without written permission. Reasonable excerpts may be reposted so long as it is linked to this page.