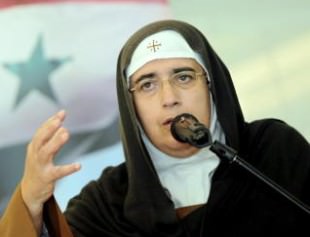 I had posted sometime ago that the Maronite Archbishop in Damascus wrote “we are going to die.”

That wasn’t hyperbole. Explains a Melkite nun, Mother Agnes Mariam, who has been working for over 18 years in Syria as the proponent of the Mussalaha Initiative, a peace initiative, in an interview with RT:

Whatever else you think is happening in Syria, as she explains, the rebels are killing the Christians because they are Christian. Whatever else you’ve been told about Syria, you might want to look at this round-up in the Examiner.

Explains the Examiner, “But contrary to narrative being told by corporate media news outlets the militia the Christians have formed isn’t fighting against Syria government forces.”  The Christians in Syria are not fighting Assad or the government. They are fighting for their own lives.

More information on Mother Agnes, her order, and her statements about the alleged factions in Syria, see this interview. Also, see Mother Miriam’s biography, including her story on how restoring an icon of the Virgin Mary from war damage, and seeing that this icon was 1000 years old, changed her forever.

Lord have mercy on us and save us.

This article, Melkite Nun Explains the Syrian Rebels are Destroying Them because they are Christian is a post from The Bellarmine Forum.
https://bellarmineforum.org/melkite-nun-explains-the-syrian-rebels-are-destroying-them-because-they-are-christian/
Do not repost the entire article without written permission. Reasonable excerpts may be reposted so long as it is linked to this page.