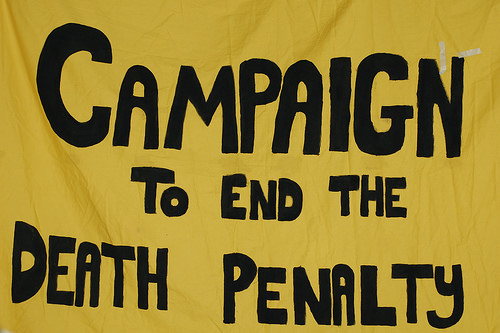 It has been a couple years since the last death penalty confusion amassed, so it seems that once again, people are kicking dust up trying to make it seem like the death penalty is immoral. Surely they jest, right? But, the Catholic newspapers, all of them it seems, have rallied around taking a stance against it this past week. The Huffington Post happily reported on it.

Let’s not think that the newspapers have proclaimed a dogmatic teaching. Despite the best intentions and social activism to make this a pro-life issue, there is an equal and compelling pro-life argument in favor of the death penalty as well.

First, let’s get one thing straight:  the death penalty is not intrinsically evil. As Professor Rice wrote, way back in the 1990s for New American Magazine:

St. Thomas Aquinas argued that the common good requires that some men be removed from the community by execution:

The life of certain pestiferous men is an impediment to the common good which is the concord of human society…. Therefore, certain men must be removed by death from the society of men…. Therefore, the ruler of a state executes pestiferous men justly and sinlessly in order that the peace of the state may not be disrupted.

I love that term: pestiferous men. But our culture today only sees smoking tobacco and having a belief in God as evil.  You see, today people are even more confused than when Professor Rice wrote, and he explained the confusion back then:

Another justification for capital punishment is retribution, which some opponents of capital punishment confuse with vengeance. As a sound principle of natural law and common sense, the punishment should fit the crime. If someone had been convicted of the assassination of President Kennedy and the judge had sentenced him only to five years in prison, the nation would have been properly outraged. […] Retribution involves the rightful use of that penalty to restore that balance and thereby to promote the common good. Murder should be stigmatized as the crime of crimes. To punish it by imprisonment — a penalty qualitatively no different from that inflicted for embezzlement — is to devalue innocent life. Seen in this light, the death penalty promotes respect for innocent life. 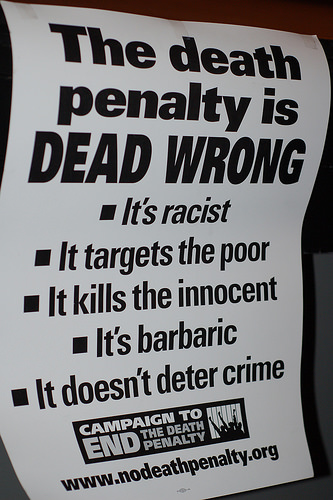 I want to emphasize again that point he makes:  the punishment is supposed to fit the crime. There is a psychological problem at work here, in some ways, related to abortion. Since we have made abortion a crime with no punishment, under the guise of “legalizing” it, is it not necessary to cheapen the punishment for murder as well? Just a digression there to point out his point. There is room for debate in this, however, as Rice continues:

“The state’s moral authority to impose the death penalty, as with the moral authority to kill in a just war, ultimately rests on the fact that the state derives its authority from God who is the Lord of life. However, one can legitimately argue on prudential grounds that the death penalty ought not to be imposed in a particular society at a particular time. Perhaps the most telling prudential argument is that delays and excessive technicalities introduced into the criminal justice system by Supreme Court rulings have caused the death penalty to be a poor man’s punishment inflicted on those, often members of racial minorities, who lack the means to engage highly competent attorneys at the trial state of the proceedings. Ultimately, the solution to this problem is to restore a greater measure of realism to the criminal process so that the issue of guilt or innocence will not be obscured. Too often, criminal trials bear out the truth of Justice Benjamin Cardozo’s observation that “the criminal is to go free because the constable has blundered.”

Rice’s point is pertinent — there is a debate to be had, and it is worth constant discussion. Even Pope Benedict reminds us that this debate can reach both sides without implicating schism or a single line of Catholic thought:

“Not all moral issues have the same moral weight as abortion and euthanasia. For example, if a Catholic were to be at odds with the Holy Father on the application of capital punishment or on the decision to wage war, he would not for that reason be considered unworthy to present himself to receive Holy Communion. While the Church exhorts civil authorities to seek peace, not war, and to exercise discretion and mercy in imposing punishment on criminals, it may still be permissible to take up arms to repel an aggressor or to have recourse to capital punishment. There may be a legitimate diversity of opinion even among Catholics about waging war and applying the death penalty, but not however with regard to abortion and euthanasia.”

So we are allowed to debate this! Thank God! We can be Catholic and have different opinions on the death penalty and not have a dogma forced on us where there is none.  Let me repeat:  there is no dogmatic requirement of assent against the death penalty.

That means you can be pro-life and for the death penalty (but you saw that above).

At least one opinion critical of the newspaper statement takes a pretty interesting stance by likening it to the Waldensian errors. I was rather fond of the opening salvo:

“The editorial manifests a wondrously positivistic indifference to, and disregard for, distinctions in doctrine. That all the Doctors and Fathers of the Church–with the exception of Tertullian who died outside the faith — have taught the essential validity of capital punishment; and that it is the teaching of the Council of Trent that where all the Fathers and Doctors hold one interpretation of Scripture as the proper one, Catholics are to accept it, are two propositions that signify very little in the oppressive culture of mutationist accounts of doctrinal development.”

I just want to say for the record that I am for the death penalty being applied for first degree murder, high treason by elected officials, and capital crimes as found in common law. I don’t think it should have been applied to Our Lord, nor do I think the deaths of Christians at the hands of Bolsheviks and Stalin in Russia, or those such as Fr. Kolbe’s by the Nazis. I’ve never seen people use that argument against the death penalty, though.

Capital punishment is obviously a “right to life” issue. But it is often oversimplified. One could legitimately argue against both abortion and, on prudential grounds, capital punishment. But the two cases are not the same since the unborn child is innocent and the convicted murderer is not. One could therefore also legitimately argue against abortion and in favor of capital punishment. The liberal position today, however, is to oppose the killing of convicted criminals but to approve the killing of innocent children in the womb. It is a symptom of debased humanism to protest a murderer’s deserved punishment while acquiescing in the killing of innocent children through abortion.

All human life is precious because we are all created in the image and likeness of God. But God also gave us free wills and made us by nature social beings with the inclination to live in community and with the moral duty to act in accord with the common good of that community. It is fair to say that one pressing need of the human community, in the United States as elsewhere, is to restore respect for innocent life and to protect innocent members of the community against aggressors, whether abortionists or more conventional killers.

In this context, the imposition of capital punishment can be seen as a means to restore respect for innocent life. The prudent use of the death penalty can emphasize, as no other penalty can, that malefactors are responsible for their own actions and that the deliberate, willful taking of innocent life is the most abhorrent of all crimes precisely because the right to life is the most precious of all rights.

Unfortunately, I don’t think people can see that point anymore.

This article, Oh, that Death Penalty Thing Again… is a post from The Bellarmine Forum.
https://bellarmineforum.org/oh-that-death-penalty-thing-again/
Do not repost the entire article without written permission. Reasonable excerpts may be reposted so long as it is linked to this page.