He Who Humbles Himself Will Be Exalted

He wanted to keep it simple, humble, down to the plain pine casket. After all, the Funeral Mass and graveside Commendation carry the last day’s importance, not the shine on the soon-to-be-buried casket.

Charlie had his “exit notes,” said Father Terrance Fisher in his homily, all planned out ahead of time. “The wake and funeral are not ‘a celebration of the life of….’ Therefore, neither at the wake nor at the Funeral Mass will there by any display of photographs, videos, slides, etc. There will be no eulogy, neither at the wake nor at the Mass, whether the eulogy is explicitly such or disguised as something else.”

So there was to be no eulogy, but that didn’t go according to plan. From group to group, whether at the wake or the funeral luncheon, Charlie stories and anecdotes abounded. And all you had to do was look around to see a true picture of the person Charles Rice was.

He was devoted to family. The first several pews of both sides of the Church’s main aisle were filled with family, beginning with his beloved Mary, and then with children and grandchildren and other family members. But his family present also included former law students and their families, those who shared meals and discussions with him in their formative years and carry his legacy with them.

He was a child of Mary, praying the full twenty-decade Rosary daily. The choice of hymns — “Hail, Holy Queen,” “Salve Regina,” “Ave Maria” — clearly showed a deep connection to Our Lady, a connection that influenced Charlie’s continued presence at Notre Dame University and his constant call to those in power to remain committed to the Faith upon which the school was founded.

Above all, he was unwavering in his Catholic Faith. The hymns, “Panis Angelicus” and “Holy God We Praise Thy Name” only scratched the surface of a faith that led him to offer his sufferings to the Lord, refusing pain medication in his final days, according to Father Fisher, noting Pope St. John Paul’s words about “entering into Christ’s sufferings more fully.”

Fr. Fisher said, in summary, that “He used what God gave him to staunchly defend the Church. Charlie kept the Faith.” 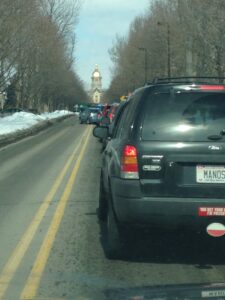 Professor Charles Rice was laid to rest at Cedar Grove Cemetery on the campus of Notre Dame University. Marines in full dress uniform gave him a 21 gun salute while the service ended with “Taps.”

Let us pray for the repose of his soul and that we have the grace to continue the legacy he has handed on to us.

This article, He Who Humbles Himself Will Be Exalted is a post from The Bellarmine Forum.
https://bellarmineforum.org/he-who-humbles-himself-will-be-exalted/
Do not repost the entire article without written permission. Reasonable excerpts may be reposted so long as it is linked to this page.