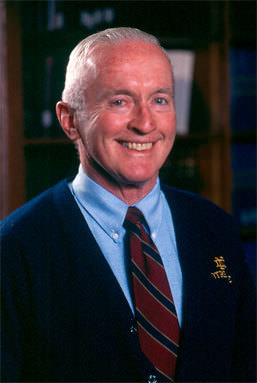 I didn’t go to Notre Dame and I didn’t have Charlie Rice in a law class. I was just lucky enough to work with Professor Rice, first when he began giving annual talks at the National Wanderer Forums in the 1970s, and for the last 20 years as secretary of the Wanderer Forum Foundation/Bellarmine Forum, of which he was Chairman of the board.

One of my jobs way back when was to transcribe the talks from the National Forum. Prepared text was anathema to him so I had to rewind, rewind, rewind to catch the legal cases the rolled off his golden tongue. I had to delete some of the quips and it was years before I realized it was Justice William O. Douglas, not Justice William Zero Douglas.

Rice shot from the hip: “How many loudmouths and windbags have you seen who have pontificated against Humanae Vitae without having any idea what’s in it?” he asked.

And this one: “…the legalization of homosexual acts — what has that to do with the family? It has a lot to do with it, because when you legalize homosexual acts, you legalize not de jure, not in terms of the law, but you legalize in fact homosexual marriages. So what? All I’m saying is that if it doesn’t make any difference to a society whether boys marry girls or other boys, that society has gone beyond the line of clinical insanity.”

There was no greater champion of the right to life than Charlie Rice. The ink was hardly dry on Humanae Vitae before he saw the clear and present danger to souls and families in contraception. His last book, Contraception and Persecution is a bold prophecy of things to come if the will of God is scorned.

But on to football. Nothing, nothing, nothing could keep him away from the game. When the Wanderer Forums took place in the fall, the chairman would disappear on Saturday afternoons. “But you have to emcee the afternoon session!” The response?

The quality of his jokes at the evening dinner would reflect the score.

Charlie Rice was filled with the virtue of hope. He believed with his whole heart and soul in the words of St. John Paul about the coming of a new dawn, the springtime of the faith. But he knew what we are up against.

“And we’ve got to stand firm. We must never compromise on any of these points. As the Declaration of Independence said, there is a law of nature and of nature’s God and this whole modern anti-life society is so foreign to that law of nature and nature’s God that the only way to correct it is through reliance on what the Declaration of Independence called Divine Providence and with the help of God — not just with the help of God, but solely by His help and generosity. He is going to do it and we are going to help Him.”

Quotes from Professor Rice are from his talk at the 1973 National Wanderer Forum, and published in the book, Saving Christian Marriage, available from the Bellarmine Forum.

This article, Faith, Family, and Football is a post from The Bellarmine Forum.
https://bellarmineforum.org/faith-family-and-football/
Do not repost the entire article without written permission. Reasonable excerpts may be reposted so long as it is linked to this page.