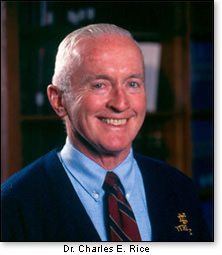 Composing an encomium for Charles E. Rice is possibly one of the most difficult things to do. Difficult, not because he is unworthy; rather it is difficult, because words in a brief space cannot capture what the man meant to the thousands who have known him. Indeed, each of us who were privileged to have been taught by him or to have called him a friend knows intimately the void that has been left and can offer his own reflection and fond memories of Professor Rice. But, if the readers will indulge me, I wish to offer my own personal reflections on what this great man meant to me and my family and why I believe that he is now a saint.

I first met Charles Rice during one summer in the mid-nineties at Notre Dame. I attended a few sessions of the then-popular “Basics of Catholicism” Conference sponsored by the Jacques Maritain Center. It was an intellectually exciting time for me as a college kid to witness the wit, intellect, and banter of Charlie Rice and Ralph McInerny both ribbing each other in front of the conference participants. Both of these professors had served in the Marine Corps and both had a time or two, if I recall, in the boxing ring. During one of the interludes between speakers, I recall some sort of jocular exchange where Rice–befitting his rank as a Lieutenant Colonel–demanded a salute from the enlisted McInerny. The sparring went back and forth amidst the laughter of the participants until McInerny dealt a stunner by bringing up the fact that his superior officer was most recognizable in the boxing ring by the soles of his shoes. This repartee between two great Notre Dame professors  was not only great fun, but a great inspiration. Here were two guys, veterans, family men, intellectuals, and they were unapologetically faithful to Christ and His Church. They were happy and jovial–and one knew that if he ever got into the ring with one of them, there would be no contest. I could tell that they were fighters–Professor Rice, in particular.

Subsequent years found me working in the pro-life movement and I found the Colonel’s sound intellectual and legal arguments to be the firepower I needed to articulate the reasons why we defend life. My own undergraduate studies of Thomas Aquinas developed into an intellectual interest in the natural law and 50 Questions on the Natural Law became (and still is) my bible in articulating the coherence of things. My intellectual curiosity piqued, I read whatever I could by Professor Rice. In addition to 50 Questions, an older book,  Beyond Abortion: The Theory and Practice of the Secular State, was fundamental to my learning of the life issues and their situation in the American experience. As a young teacher and husband, I wrote what was more or less a “fan letter” to the Colonel. In it I expressed my esteem for his work, but also that I was considering a higher degree and was contemplating either law school or graduate work. To my shock and surprise, I received a call from my bride at work (I was teaching at the time at Benedictine High School in Cleveland, Ohio) telling me very excitedly that “Charlie Rice from Notre Dame called!”  I was shocked! Here was a great hero who read my letter and looked me up and called me! (I had not given him my phone number.) I called him back and in his characteristic tough New York Irish accent said, “Go to law school. Either Notre Dame or Ave Maria…go to Ave Maria. I’ll be teaching there.”  Sold. He put me in contact with (my now fellow Bellarmine Forum Board Member and also another student of Professor Rice) Mike Kenney, then Dean of Admissions at the new law school in Ann Arbor.

Professor Rice was the rock for all of us in the new law school. His Jurisprudence course was the cornerstone of the curriculum and he was tireless in his desire to help us law students. He took great pains to ensure that we understood the material and that it was understood with reference to the clarity of Aquinas and in the truth of Christ. Characteristically he would ask a question and point saying, “You,” to his next victim. He was at the range picking off targets. It made us tougher, but it was also done in a way where one knew that this crusty old Marine wanted us to be the best. Whether someone wanted to know whether Alphonsus Liguori’s distinctions of formal and material cooperation could be part of jurisprudential reasoning, or whether or not the Incorporation Doctrine was legitimate, Professor Rice always engaged the student and–with razor-like precision–brought forth a coherent answer; after all, he “had Aquinas in Torts”…and the Angelic Doctor got a ‘B.’

Countless are the ways that he looked out for all of his students–and even those who weren’t. I recall Professor Rice always at the ready with the ubiquitous Notre Dame Law School Alumni Directory trotting out names and contacts, ever ready to help a young attorney or place a new law graduate with an internship or clerkship or firm opportunity. More than that, he would place calls on his students’ behalf, he was generous with the “Tell Jack So-and-So that Charlie Rice told you to call” and he would help those who needed it in unforeseen and quiet, unknown ways. He would show up with donuts for a bunch of high school kids that he never met to make their visit to Notre Dame for a football game more enjoyable. He was not a stuffy intellectual devoted only to publication in law journals. He–with his daughter–wrote a book for teenagers: Who Am I? Where did I Come From? Where Am I Going?, he taught CCD to junior high kids, and was a boxing coach for the young men of Notre Dame.

To me personally, he was a dear friend and mentor. I and a couple of  his other students revived a dormant Wanderer Forum Foundation (now the Bellarmine Forum) and joined him in re-establishing this apostolate. He and his wife, Mary, were there for my wife when she had serious moral questions about the end-of-life decisions for her grandfather and about  a possible miscarriage for herself. I grew to love this man as another father and it was always a great privilege to get a phone call from him with the always ready “Captain, this is Charlie Rice” on the other end of the line. He and Mary always welcomed us into their home as we traveled across the country and they spoiled our kids rotten. Most special to me was that he asked about our disabled son Tommy in every phone call. “How’s Tommy?” he would say. I knew that our boy was in his prayers, certainly, through Fr. Ciszek’s intercession. His was a muscular and fatherly Catholicism that was humble, loving, and fearless.

Of all the things that could be said, the most important is that the Colonel loved Christ and His Church and those entrusted to him in his earthly life. Never without the Rosary in his pocket, he was a true son of Our Lady. He defended her as he defended his own bride and he defended her school when even the authorities within would dishonor her. He knew that the Supreme Lawgiver humbly made His repose in the Tabernacle. The constant visits, the daily Masses, and the humble example of a man who prays. The Rice home is replete with holy reminders and images of those who influenced this great man and his family–holy cards of deceased priest friends, images of Our Lady and the saints, a Marine Corps sword on the wall, and, of course, some Irish whiskey in the cupboard and some Guinness in the fridge. Charlie Rice’s family held (and holds) pride of place. Look at his books–the ubiquitous dedication “To my wife, Mary, our children and grandchildren.”  His love and generosity to his children and grandchildren and his love for his bride of 50+ years is obvious.

I suppose that the final and most fitting memory and legacy of Charlie Rice may be summed up by something that he repeated to students in his many Jurisprudence classes over the years. He reminded us that, in the final analysis, governments and earthly powers will all pass away–but the human person will not. The human person has a dignity and a value that transcends the state. The human person, made in the image and likeness of God, has an immortal soul and will live forever. God created each of us individually, knows us individually, and wants us to be happy with him forever; and He never tires of calling us to Himself.

Indeed, God is not dead–He isn’t even tired. And I suspect that Charlie Rice isn’t tired either. Colonel, pray for us. Requiescas in pace.

This article, Charles E. Rice (1931-2015): Well Done, Good and Faithful Servant is a post from The Bellarmine Forum.
https://bellarmineforum.org/charles-e-rice-1931-2015-well-done-good-and-faithful-servant/
Do not repost the entire article without written permission. Reasonable excerpts may be reposted so long as it is linked to this page.