On the Feast of the Archangels Michael, Raphael, and Gabriel

It is a crying shame today that most of the people walking around society describe themselves as “spiritual” and yet they seem not interested in the spiritual persons God made. Ghost shows and paranormal shows, where people attempt to speak to invisible persons from the beyond, are very easy to find, but ask a Catholic if they regularly engage in conversation with the angels and most will be bewildered. What? You want me to talk to invisible people? Are you mad?

It is easiest to conceive of angels as invisible persons. Just like the people you meet and greet everyday, there are invisible intelligent beings among us constantly. After all, we proclaim it as a basic tenet of faith in the Creed that God created the “visible and invisible.”  Shouldn’t that mean that every Catholic should accept that there are invisible angels?

Today is the feast of three particular angels, Michael, Gabriel, and Raphael. Each has had a very special role. Michael ousted the dragon from Heaven after the trial of the angels. Gabriel announces special plans of God — most importantly, he came to Mary to offer to her God’s plan for her to become the Mother of God, if she accepted (thank God Mary did accept, “Be it done unto me according to your word.”). Raphael is traditionally regarded as a healer, however, his role is much broader as shown in the book of Tobias — he even manages to drive devils out and fetch some cash. Not a bad friend to have, eh?

Here are some basics about the angels, taken from my trusty old school catechism:

1. The angels are pure spirits. They can, however, take a visible form.

The angels are pure spirits without bodies, whereas men have both body and spirit. Yet the angels can take to themselves a bodily form, as did St. Raphael (Tob. v. 18), when he undertook to accompany the young Tobias on his journey. At the sepulchre of Our Lord, after the resurrection, the angels appeared in the form of young men, and the same was the case after Our Lord’s ascension (Mark xvi. 5; Acts i. 10).

The nature of the angels is nobler than that of man; they have greater knowledge and greater power.

The angels excel all other beings that Our Lord has created. Our Lord says that not even the angels know when the Day of Judgment will come (Matt. xxiv. 36), thereby indicating that their knowledge is greater than that of men. So also is their power. An angel destroyed all the first-born of Egypt. Another angel caused the death of one hundred and eighty-five thousand soldiers of the King of Assyria, who had blasphemed God (Is. xxxvii. 36). An angel protected the three young men in the furnace at Babylon (Dan. iii. 49).

God created the angels for His own glory and service, as well as for their own happiness.

Among all the creatures that God has made, the angels resemble Him the most, and therefore the divine perfections shine forth the most brightly in them. They also glorify God by ceaselessly singing hymns of praise to Him in heaven. The angels also serve God. The word angel signifies messenger. “Are they not all ministering spirits,” says St. Paul, “sent forth to minister to them that shall receive the inheritance of salvation?” (Heb. i. 14.) Even the bad angels promote the glory of God, for God turns their attacks on us to His glory and our profit. Goethe rightly describes Satan as “a power that always wills evil, and effects good.”

The number of the angels is immeasurably great.

Daniel, in describing the throne of God says: “Thousands of thousands ministered to Him; and ten thousand times a hundred thousand stood before Him” (Dan. vii. 10). Holy Scripture calls them the heavenly host. In the Garden of Olives Our Lord said that if He were to ask the Father, He would presently send Him twelve legions of angels (Matt. xxvi. 53). The number of the angels is greater than that of all men who ever have lived or ever will live. “The number of the angels,” says St. Dionysius the Areopagite, “is greater than that of the stars in heaven, or of the grains of sand on the seashore.”

The angels are not all equal; there are nine choirs or ranks among them.

The rank of the angels is determined by the amount of the gifts that God has given them, and according to the office assigned them. Nearest to the throne of God are the seraphim, who burn more than the rest with the love of God; next to them are the cherubim, who are distinguished by the vastness of their knowledge. We also read in Scripture of thrones, dominations, principalities, powers, and also of three archangels, St. Michael, St. Gabriel, and St. Raphael. There is also a corresponding division among the fallen angels.

2. All the angels whom God created were, at the beginning, in the grace of God and well pleasing to Him. But many of the angels sinned through pride, and were cast down by God into hell forever (2 Pet. ii. 4).

When God created the angels, He created them all in His grace. But none can be crowned without a struggle (2 Tim. ii. 5), and God subjected the angels to trial, that so, according to the universal law of the universe, they might earn their reward of eternal happiness. In this trial a large number of the angels fell. They desired to be equal to God, and refused to submit their will to His (Cf. Is. xiv. 12-14). They did not abide in the truth (John viii. 44). Hence arose a great war in heaven. Michael and his angels fought with the dragon, and the dragon and his angels fought, and prevailed not, neither was their place found any more in heaven. The dragon was cast out and all his angels with him (Apoc. xii. 8, 9). They were all cast down to hell; not that they were confined to any local hell, for they are allowed to wander about the earth tempting men, but they carry their hell with them wherever they go, inasmuch as they everywhere suffer the torments of hell. Their leader was Satan, or Lucifer, for this was his name before he fell, and he is said to have been the highest of all the angels. The number of the fallen angels is less than that of those who remained faithful. The fall of the angels was the more terrible, because they had previously enjoyed such a high estate. The higher the place from which we fall, the worse the fall. At the Last Day the evil angels will be judged, and their wickedness and its punishment will be made known to the whole world ( Jude 6; 2 Pet. ii. 4). To deny the existence of the evil angels is a grievous sin against faith.

This is a great feast for us! Take a moment today and think of these great ministers and the helpers God has created for us. Do you act as if you believe in angels?

Fr. Hardon was oft to suggest that we pray the Prayer to St. Michael first thing in the morning and again just before bed. Why? Because we need his help today — see one reason here.

As you pray for the help of the archangels today, consider these points:

1. They put good thoughts into our minds, and move our will to what is good.

The angels who appeared to the shepherds at Bethlehem, and who were seen at the tomb of Christ, and after His ascension, made themselves visible and spoke to men; but generally they influence us without being seen or heard by us. They move us to some step that is conducive to the welfare of our souls or bodies, and often save us from some impending danger by a secret impulse, without which we should have incurred death or misfortune.

2. They offer our prayers and our good works to God.

Thus St. Raphael offered the prayers of Tobias (Tob. xii. 12). The angel in the Apocalypse offers the prayers of the saints in a golden censer (Apoc. viii. 3). This is not because God Himself does not hear our prayers, but the angels mingle their prayers with ours, and so make them more acceptable to God. “In all the benefits we receive from God,” says St. Thomas, “our guardian angel takes part, because he helps in obtaining them for us.”

3. They protect us in danger.

Thus. St. Peter was delivered from prison by an angel (Acts xii. 7 seq.), Daniel was kept safe in the den of lions, and the three young men in the fiery furnace (Dan. vi. 22; iii. 49). We read stories sometimes of children being run over, or falling from a height, and escaping unhurt. We can scarcely doubt that this was owing to the intervention of their guardian angels. God has commissioned the angels thus to help us. “He hath given His angels charge over thee, to keep thee in all thy ways. In their hands they shall bear thee up, lest thou dash thy foot against a stone” (Ps. xc. 11).

4. They often reveal to men the will of God.

If we desire the protection of the holy angels, we must try and imitate them by a holy life; we must also honor them, and often invoke their aid.

Holy Archangels of God, pray for us! 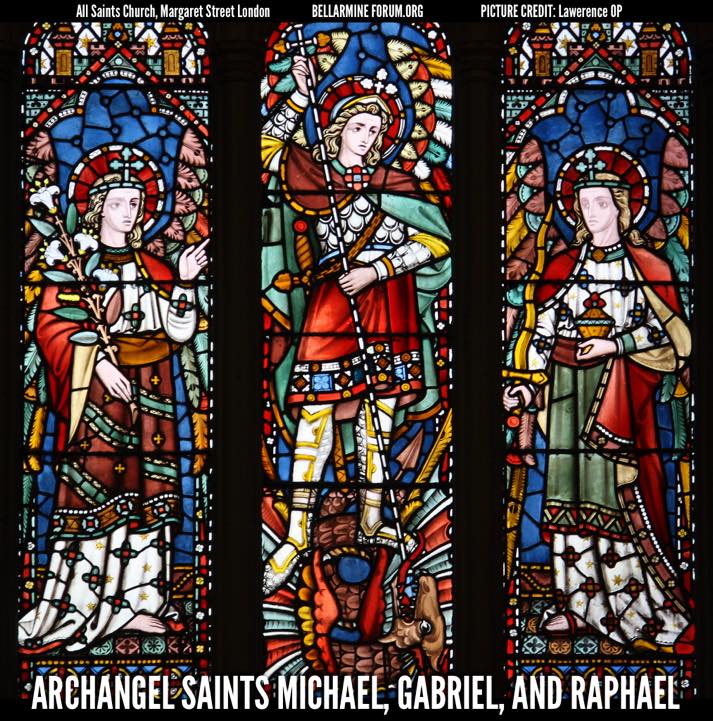 This article, On the Feast of the Archangels Michael, Raphael, and Gabriel is a post from The Bellarmine Forum.
https://bellarmineforum.org/on-the-feast-of-the-archangels-michael-raphael-and-gabriel/
Do not repost the entire article without written permission. Reasonable excerpts may be reposted so long as it is linked to this page.