Our Lady of the Blessed Sacrament, Bellarmine, and Fatima

There is always a little magic it seems in the feast days of Mother church. It’s not really magic, not in the sense of Simon Magis, but magic in the sense of little special things and connections — some might call it serendipity. I think it’s more to do with the actual intercession of the saints honored on the feasts and their interest and interaction in our lives. Today is one of those days both for the Bellarmine Forum and for me personally. The feasts today are incredible:

On the side:  You may recognize that feast day listing from the little section we’ve been adding to the front page this year. Decades ago, when we were the Wanderer Forum Foundation, we published a spiral-bound daily feast day calendar. It had a weekly view and plenty of room to write some notes,  beautiful illustrations, and notes about a saint a week. We got away from doing it, but the beauty of having a website is that we can put the information on here. As the year goes along we’ll have it all in the database and be able to do more with it in years to come.

Look at that mix of feasts today, though! It’s all our favorite stuff! A few years back, Professor Rice, our chairman, decided we needed a good patron saint. We had many discussions over possible candidates. St. Robert Bellarmine won out for many reasons and we changed our name to Bellarmine Forum. I never really paid attention to his feasts days. On the new calendar, his feast is September 17, but I never paid attention to his feast on the old calendar:  the same day as Fatima – May 13th!

A Day of the Blessed Sacrament 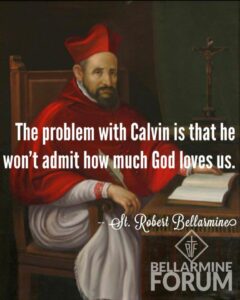 There’s a strong theme running through today:  the Eucharist. Bellarmine had to contend with John Calvin on the concept. I love where he winds up. Says Fr. Hardon, recounting the life of Bellarmine:

In writing on the Holy Eucharist, Bellarmine defended the Real Presence from the attacks of John Calvin who argued that the Real Presence is unnecessary. The gist of Calvin’s argument is that when a child is baptized in the name of the Father and of the Son and of the Holy Spirit, we do not say that the Holy Trinity is in the water. In other words, Christ who is God does not have to be present in the Eucharist to give us grace, so why concoct a Real Presence to produce grace that Christ can bestow without really being present. Bellarmine refutes Calvin by pointing out that if we measured God’s goodness by what He has to do, none of us would exist. Nor did God have to become man. He could have redeemed the world without becoming man – simply by an act of the Divine Will. And after becoming Incarnate neither did He have to suffer and die for our salvation. The least act of Christ’s human will would have been enough to save a thousand worlds. Bellarmine said that Calvin’s problem was that he did not realize how much God loves us. If Christ said, “he that eats my flesh and drinks my blood, has life in him” then who is John Calvin to contradict the Son of God? 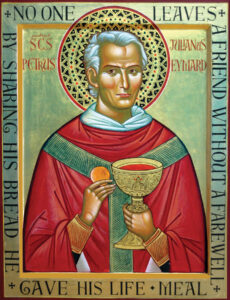 Out of those roots in Bellarmine’s time, a growing need for the Church was identified that there was a crisis in the belief in Our Lord’s deep love for us — that He wants to be with us in person in the Blessed Sacrament, by His Real Presence. Centuries later, Our Lady would appear to a religious priest and declare that “All the mysteries of my Son have a religious order of men to honor them.  The Eucharist alone has none…”. That priest was St. Peter Julian Eymard. Eymard had been before the Blessed Sacrament praying when this signal grace happened. He acted on it, and ultimately, at the encouragement of Pius XI, he founded the congregation for the Most Blessed Sacrament — when? On May 13.

I owe to her (to Mary) my preservation, my vocation and above all the grace of the Most Blessed Sacrament. She gave me to her Son as his servant, his child of predilection.

Eymard later in his life would exhort imitation and devotion to Mary as she is the model of of her son, Jesus, and the she brings her son to us:

Become inspired with the spirit of Mary. Her spirit is the same as that of Jesus… She is the true and perfect copy of the virtues of Jesus. The great mission of Mary is to form Jesus in us; she is the mother who educates us.

May 13 and the Blessed Sacrament

Then, in 1921, the feast of Our Lady of the Most Blessed Sacrament was added to the calendar. One has to wonder if the Holy See was swayed by the events at Fatima.  On May 13, 1916, one year before Our Lady’s appearance there, just for highlighting the importance here, the angel appeared to the children at Fatima, and gave a catechism and prayer on the Most Blessed Sacrament. He appeared three times, and at the third appearance, he showed up with a chalice chalice above which was a Host from which drops of Blood were falling into the chalice. The angel left the chalice and Host suspended in the air, and coming over with the children, prostrated himself on the ground, and taught the children this prayer:

My God, I believe, I adore, I trust and I love Thee. I beg pardon for those who do not believe, do not adore, do not trust and do not love Thee. O Most Holy Trinity, Father, Son and Holy Spirit, I adore Thee profoundly. I offer Thee the most precious Body, Blood, Soul and Divinity of Jesus Christ, present in all the Tabernacles of the world, in reparation for the outrages, sacrileges and indifference by which He is offended, and by the infinite merits of the Sacred Heart of Jesus and the Immaculate Heart of Mary, I beg the conversion of poor sinners.

The angel’s focus was clear:  Jesus is present in the Blessed Sacrament and we are to be with Him there. Eymard’s message the same. And, do not forget Bellarmine’s punctuation:  Calvin did not believe because he could not admit that God loved us so much that He’d want to be with us.

I could go on and on here with all the abuses. Communion in the hand, for instance. To me, that one act alone shows the error of our age:  Man believes himself to be god, so much so that he’d relegate God to be something handled like a thing. Sadly, most men today do not even believe God is a thing — but a mere notion. More on that later this week. Today, let us focus on this perennial message from Heaven to us concentrated on May 13:  Jesus loves us so much that He gave us the Blessed Sacrament as a sign of His love! Be with Him today!

Thank God! And thank God for such a great day!

Our Lady of the Blessed Sacrament, pray for us!   (say it so you get the indulgence!)

St. Robert Bellarmine, pray for us!

This article, Our Lady of the Blessed Sacrament, Bellarmine, and Fatima is a post from The Bellarmine Forum.
https://bellarmineforum.org/our-lady-of-the-blessed-sacrament-bellarmine-and-fatima/
Do not repost the entire article without written permission. Reasonable excerpts may be reposted so long as it is linked to this page.