Earlier this week, on May 5 (5/5/15), certain Vatican apparatchiks unveiled the Year of Mercy logo for the Jubilee Year of Mercy and included a lot of fodder regarding what they see as the symbolism of the image.  The image is at the right.  Vatican Radio reported on the unveiling and put a lot of emphasis on the word “re-awakening”.  See the full article “Jubilee Year of Mercy: a re-awakening for all Christians.”

Here is how Vatican Radio summarized the meaning of the Year of Mercy and introduced the logo: “The press conference in the Vatican saw the unveiling of the logo for the upcoming Jubilee Year of Mercy portraying the figure of the Good Shepherd carrying the lost soul that provides a fitting summary of what the Jubilee Year is all about. Similarly, it’s [sic] motto, Merciful like the Father, serves as an invitation to follow the merciful example of God who asks us not to judge or condemn but to offer love and forgiveness instead.”

[grammar errors/typos in the original]  When you look at that picture is that what you see?

The “OFFICIAL” explanation of the Year of Mercy Logo

I wasn’t satisfied with that, so I also looked to the more in depth report available from the official Vatican News source — at least that’s what they assure me of in the site header, and it is actually vatican.va website address.  Jackpot!  There’s a long quote with lots of interesting information [read: blather] there.   Here’s what we get as the explanation for this thing:

We begin with the logo which represents a summa theologiae of the theme of mercy and the motto which accompanies it. The motto Merciful Like the Father (from the Gospel of Luke, 6:36) serves as an invitation to follow the merciful example of the Father who asks us not to judge or condemn but to forgive and to give love and forgiveness without measure. The logo is the work of Father Marko I. Rupnik. It is an image quite important to the early Church: that of the Son having taken upon His shoulders the lost soul, demonstrating that it is Christ’s love that brings to completion the mystery of His incarnation culminating in redemption. The logo has been designed in such a way so as to express the profound way in which the Good Shepherd touches the flesh of humanity and does so with a love that has the power to change one’s life. One particular feature worthy of note is that while the Good Shepherd, in His great mercy, takes humanity upon Himself, His eyes are merged with those of man. Christ sees with the eyes of Adam, and Adam with the eyes of Christ. Every person discovers in Christ, the new Adam, his or her own humanity and the future that lies ahead. The scene is enclosed in a mandorla, an element typical of ancient and medieval iconography, that recalls the coexistence of the two natures, divine and human, in Christ. The three concentric ovals, with colours progressively lighter as we move outward, suggest the movement of Christ Who carries humanity out of the darkness of sin and death. Conversely, the depth of the darker colour suggests the impenetrability of the love of the Father Who forgives all.

A Summa Theologiae it is not, at least not from our Church

Whoa!?   what?  a “summa theologiae” of mercy?   What?!?!   [biting my tongue and suspending judgment momentarily]  I read the rest and see who the author was, and bunch of tripe and get to the weird “His eyes are merged with man.” and then a long discussion of the mandorla.  Christian uses of the mandorla are to represent the coming together of Heaven and Earth that Jesus’s incarnation, crucifixion, and resurrection opened for us mortal men.  It’s the blue oval typical of icons of Our Lord, such as here: 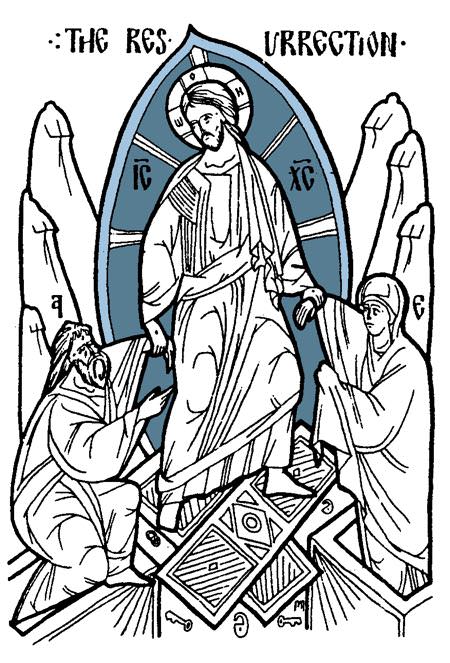 You can see that influence in the jubilee year of mercy logo.  Even down to the black blocks that kind of look like the tops of the graves trampled under Jesus’s feet.  After all, Jesus is God and He conquered death (we don’t).  But the real difference between the Resurrection icon and the Year of Mercy logo is the selection of people in relation to Our Lord.  In icons of the resurrection, people are always being grabbed and lifted up by Our Lord.  After all, He is God and we are not.  The Year of Mercy logo has this body draped over the shoulders of Our Lord in a way that makes it difficult to discern whether there are two people there, or if this is some sort of monster.

The worst part of the logo is what catches your eye first: 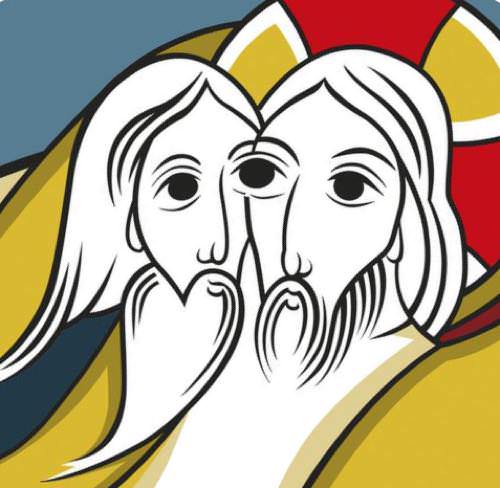 That’s disturbing. Mostly because it is unnatural.

I’m not sure what bothers me more:  the unnaturally large eyes, or the intentional melding of the eyes to make a “third eye” as it were.  Whatever else it is, this year of mercy logo does not strike me that this is an image of Our Lord.  I don’t know who it is, but I don’t get the sense that this is Jesus.

Is it Jesus?  The Year of Mercy Logo is as ambiguous as Speaking in Tongues

Testing this theory, I decided to show these two pictures to children and ask them who they saw.  Granted, I have a very small sample set, and I don’t want to make anyone think this was an in-depth study of any sort.  Rather, it was just a quick test of my reaction.  I showed the image of the Resurrection and asked a child who was in the picture.  Everyone one of the few kids I asked said, “that’s Jesus.”  fair enough.  So each of them can recognize Jesus.

Then, I showed the jubilee year of mercy logo and asked them who was in the picture.  One child said, “monster.”  Another “I don’t know” and another said “wrestlers.”  Only one child thought it might be Jesus, but asked me if it was in fact Jesus.  I said I wasn’t sure myself and asked them which picture they liked better, and they said the Resurrection icon.  So, the one result that it might be Jesus makes this logo kind of like people blathering about in so-called “speaking in tongues.”  Only those who are believers of the phenomenon think it’s a good thing.  Others, who use their reason, such as linguists, try to discern what is being said and hear statements resembling blasphemies.  At the end of the day, those who speak in tongues look down upon, as something less than them, those who expect language to communicate.  So it is with post-modern art.  If you expect the art to convey natural form, then you are not illumined with the higher skills they claim to possess.

Certain Bloggers give us permission to Use our Minds

Unlike Simcha Fischer, I don’t need her permission to criticize something.  It was very gracious of her to permit us to criticize it, but I don’t need anybody’s permission to use my reason.   God expects me to use it, in fact.  It may not be prudent for me to say what my reason concludes, but that’s a different question than whether I am allowed to think.  Also, unlike this professed theologian and lover of byzantine icons, any person with an elementary knowledge of icons knows that the representation written in icons is literal.  Thus, people are never represented with three eyes.  Jesus looks like Jesus well enough that children recognize Him.  I asked someone I know who is an orthodox iconographer, and his response was [with tongue somewhat in his cheek], “is outrage!  anathema!”  So much for whether this year of mercy logo is good in terms of iconography.

So, we are left with an image that has some loose connection to something religious, but even children can’t identify it.  I think the suggestion of Frank Weathers to look into real Church history and find some beautiful artwork is one good answer.

If this is the Summa, then from what Religion?

I decided instead to try and find who this really was on the logo.  If children don’t even know who it is, is it possible to find out?  I started with what I saw on the jubilee year of mercy logo:  “two heads, three eyes, and four arms.”   I googled that.

First result from wikipedia was an entry for the Hindu God “Shisupala”  wow.   He was born with three eyes and four arms.  this is promising!  Here’s an image I found looking around for images: 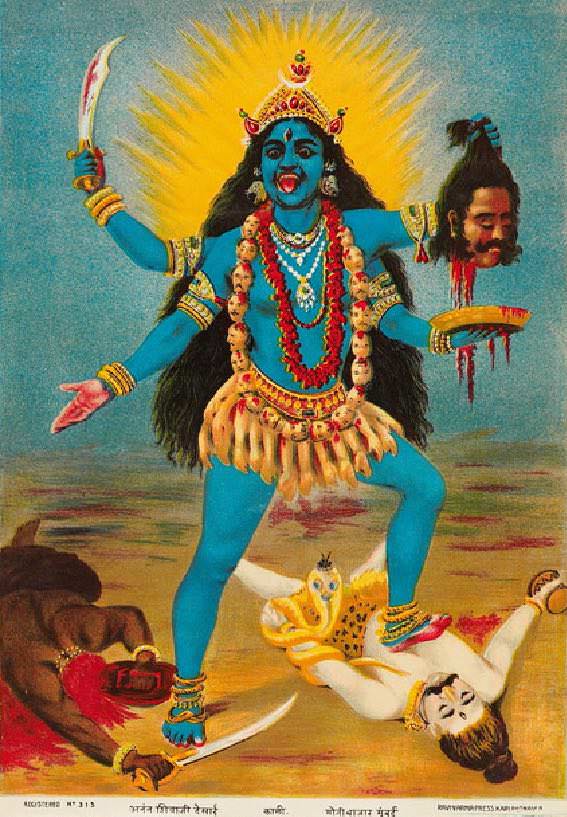 It even has the same blue color and the oval around it.   Wait…  further reading reveals that the blue guy in that print is the Hindu god Kali.  So maybe the child that saw a monster on the logo meant that Kali might be the two headed creature on the logo?   hmmm.   I wasn’t convinced that the logo is representing Kali.   So I searched some more.

I found a page from 2009 where young grade school French children were asked to draw monsters, and it appeared because this little boy drew a happy monster with two heads and many arms.   I want to stress that this is a happy monster, so it probably is like a merciful one:

Well done!  that one actually looks kind of like the one in the logo!  I still thought we might be missing out, so I looked some more.  I found images of another Hindu god, Surya, who is depicted as a red man with three eyes and four arms.

I am reasonably satisfied that even though the Church has depicted some saints as having the heads of dogs (which I’ve reported on before), there is no real tradition IN THE CATHOLIC symbolon of sharing an eye, or having a third eye, with God.  I can only find references of sharing an eye with God in gnostic, buddhist, and occult references.  The third eye is used in occult religions as a reference for someone who has awakened…  Wait, the Vatican radio piece I linked to above used that word “re-awaken”.  I’m positive it has no connection to the occult and gnostic references of awakening the third eye or anything, though.

The only other place I can find that as an idea is when children draw intentionally deformed images of monsters.

So, my gut is correct:  this year of mercy logo is a monstrosity.  That’s a shame.  The Vatican apparatus seems to think this logo is a “summa theologiae” of mercy.  cough  from what religion?  if children can’t even recognize the essence of it, it’s not right.

There is a beautiful thing intended in the Year of Mercy, to send out missionaries to those “on the existential ‘peripheries’ of society.”  That’s a nice thing.  We want that.  But this jubilee year of mercy logo doesn’t show Jesus going there, but that we are sending some three-eyed, two headed monster.  That’s not nice.  We should send something beautiful that reflects the real Mercy of God.  Something that even children recognize as Jesus.

I think they should scrap this logo.  Get rid of it.  Use something that actually depicts Our Lord Jesus instead.

This article, The Four Armed, Three Eyed Monster of the Year of Mercy Logo isn’t Catholic is a post from The Bellarmine Forum.
https://bellarmineforum.org/the-four-armed-three-eyed-monster-of-the-year-of-mercy-logo-isnt-catholic/
Do not repost the entire article without written permission. Reasonable excerpts may be reposted so long as it is linked to this page.