Truth of the Roman Rite Today. Laugh or Cry.

I’ve often been dismayed when visiting a town or city or knocked off schedule and unable to catch a recommended parish and have to toss my fate to the winds and catch Mass at whatever Church is available. It shouldn’t be like this, but I often have the feeling that I’m putting my spiritual life at risk. It’s sort of like taking a wrong turn and being in the wrong neighborhood. You know you don’t belong because the environment of the church is barren, dead, and felt banners.

You really don’t have to say anything beyond “felt banners” before you get the rest of the picture. Fake plants, generic styling, and carpeted chair things. Recently, I was in an Eastern Church (not my parish, but another) and there was a poster on a pin board. I couldn’t believe how awesome this was. 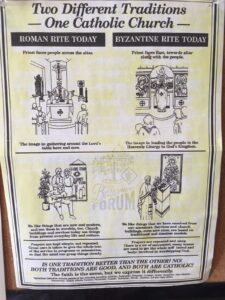 The title “Two different traditions — One Catholic Church”   I had to look at this!

The first pane compares the Roman Rite Today — note that “today” — and the Byzantine Rite Today: 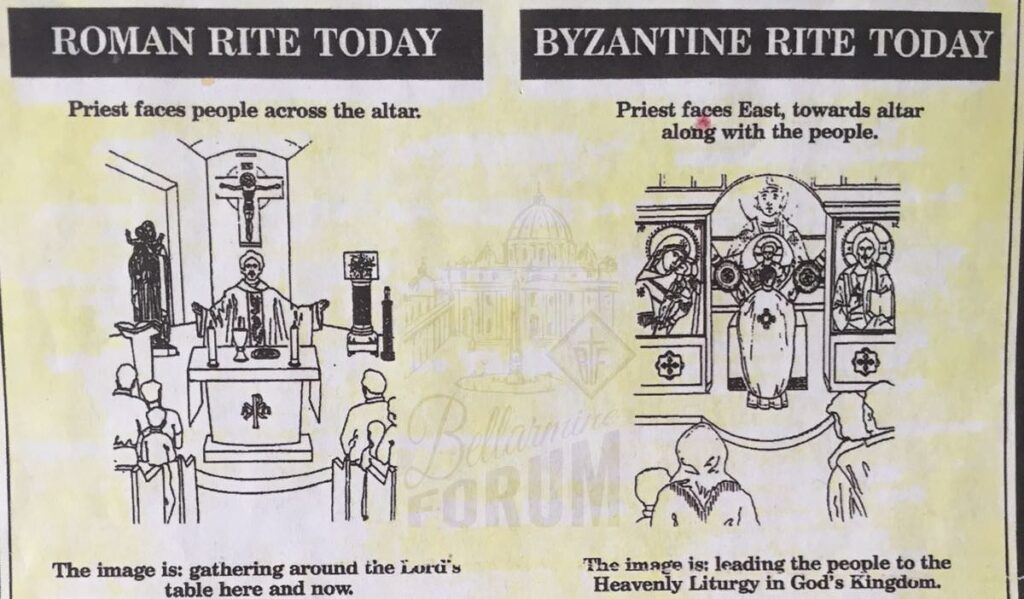 no way. They nailed it. Unfortunately, the statue of Our Lady and the crucifix (as opposed to a resurrected Jesus without a cross or an empty cross) is too generous of an image. 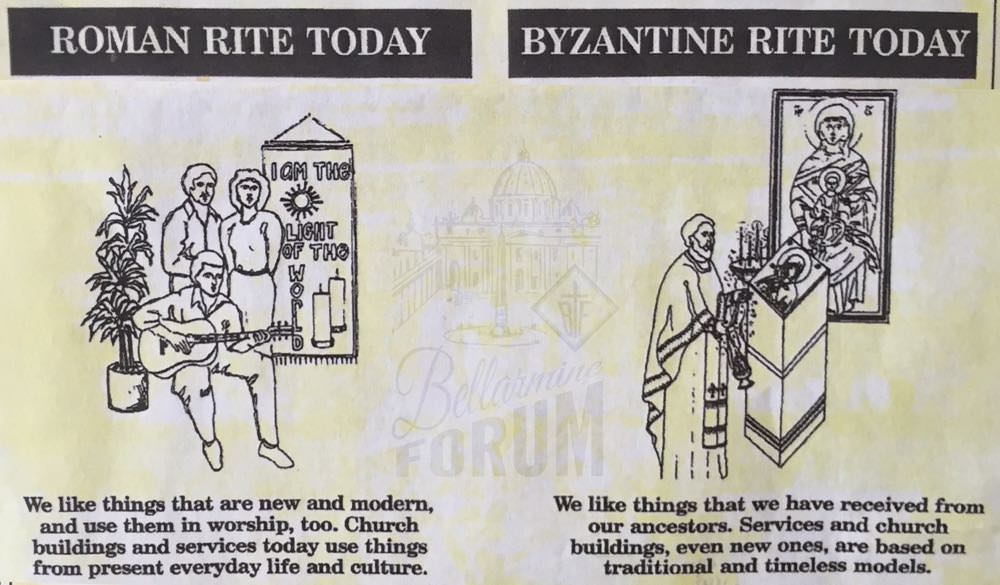 The felt banner!  I couldn’t believe it! it’s perfect! the hippy strumming guitar (as if this was a campfire or something) — it’s perfect!!!

The statement of the American underneath is typical, too. Actually, this poster was very, very kind. That explanation actually makes it sound almost sensible. (but, as we’ve mentioned many times, that’s not sensible what they are doing, and they don’t say sensible things, but silliness). Then, I love this conclusion at the bottom. It’s very, very condescending (rightfully so):

As much as I love this poster, and yes, you should laugh at this poster, it is sad. We love the Church, and there is a reason this is so condescending, appropriately so. Comparing the modern American implementation of the Roman Liturgy even to its own roots (where the priest is ad orientum, there are no guitars, no felt banners) deserves this sort of backhanded complement. It’s like patting a little kid on the head and not indicting them for being unable to understand.

It’s sad though, really. It’s sad that this image is actually a fair representation of the Roman Rite in America: 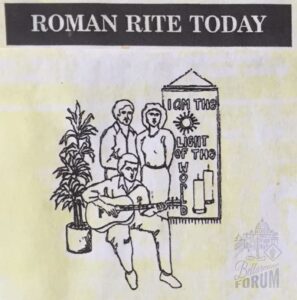 Seeing things like this should be a rare exception. Sadly, it’s not, and it is prominent enough that eastern Churches have to tell their people that those “other american catholics are still Catholic, even though nothing about them suggests it.”

But why can’t our own bishops see this? Why can everybody but them see it?

UPDATE: I’ve seen a reference or two to this post where people seem to think that this poster is praising the western changes as good. I don’t think that’s a fair read as this is definitely pejorative (compare the “we like things we have received from our ancestors”). I think the right way to read this poster is what I put in the post:  they found it necessary to tell their flock that despite how bad the modern Roman Rite has become, they are still Catholic. I may have my own doubts as to whether they are still Catholic, and I think the poster conveys enough doubts as well. I consequently don’t think it is fair to say this “praises” western innovations. It has enough hints to the contrary. What’s sad is that anyone finds it necessary to defend whether the American modern liturgy is Catholic. That’s the point.

This article, Truth of the Roman Rite Today. Laugh or Cry. is a post from The Bellarmine Forum.
https://bellarmineforum.org/truth-of-the-roman-rite-today-laugh-or-cry/
Do not repost the entire article without written permission. Reasonable excerpts may be reposted so long as it is linked to this page.