PBS Frontline: Secrets of the Vatican – a secular review of the symptoms of error

Yesterday, PBS Frontline ran a show titled, “Secrets of the Vatican” – an hour and a half show. PBS’s own description of the show is as follows:

In Secrets of the Vatican, FRONTLINE tells the epic, inside story of the collapse of the Benedict papacy and illuminates the extraordinary challenges facing Pope Francis as he tries to reform the powerful Vatican bureaucracy, root out corruption and chart a new course for the troubled Catholic Church and its 1.2 billion followers.

WARNING:  The show is disturbing. As one said, “I knew all those things existed, but it is quite a wallop to see it all in one sitting.”  Another:  “tendentious”  And another “disturbing. sad.”

It is. I watched it, and the cases they show are disturbing emotionally because there is no doubt evil is afoot. They interview several sexual abuse victims, they detail the Italian journalist who captured video footage of the scandalous gay party at which numerous priests and others attended, they detailed Maciel (founder of the Legion) but they did not mention other Legion priest cases, they detailed the Vatican Bank scandal. They got into the Vatileaks, and covered the evidence and circumstances that tend to conclude that the butler wasn’t the source of the leaks. They show Pope Benedict’s efforts to investigate and then turn to Francis’s election.

It is, without a doubt, a compilation of awful things. Many of those awful things are clearly not resolved. It’s that open-end to many of these problems that disturbs as much as the symptoms.

Because the show was so effective at wrapping these symptoms up into an inference that there is a dark power in the Vatican that appears to be immoveable, it is in some ways, tendentious. In other ways, it’s not because the show’s capacity as a secular review is myopic.

If a pack of secular scientists were to review the Temple in that time of the Gospels, they’d surely discuss the money changing and price gouging that occurred in the selling of doves and conversion to temple currency. They’d talk about the strange circumstances surrounding the death of Jesus and how it appeared to be set afoot by high ranking officers inside the Temple. They’d never really understand the problem in the way Our Lord did when he diagnosed the cause, though. The scientists would be telling us the effects,  the accidents… or in medical terms, the symptoms. They’d not be able to identify the root cause because that cause is beyond their limits. Our Lord was able to do because his viewpoint spanned the full nature of mankind.

The best thing I saw in that Frontline was the uptick the show took when considering Pope Francis. It was obvious that the producers of the show like him and have high hopes in his ability. They pointed out that the Cardinals selected Pope Francis and that he is interesting enough:  NOT from Rome, NEVER studied in Rome, and not an insider.

They also pointed to a statement Pope Francis made to the atheist editor of La Repubblica that I never really saw highlighted in Catholic press. The Catholic press certainly quoted this line:  “Heads of the Church have often been narcissists, flattered and thrilled by their courtiers. The court is the leprosy of the papacy.”  BUT! It was the Pope’s next line that caught my attention. The full quote that they highlighted on the screen was interesting: 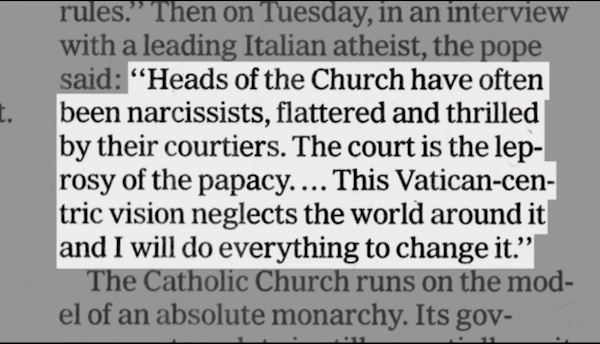 That was the full screen PBS showed. Whoa…   Wait a minute. Read the last phrase in the highlight:  “This Vatican-centric vision neglects the world around it and I will do everything to change it.”  Search around google and my recollection was confirmed — that phrase wasn’t carried in the stories. That’s a really strong statement by Pope Francis!

Even they were measured though, as one quote mentioned “every effort to reform the Vatican in the past 100 years has failed.”  Certainly, at least one theory (advanced by David Yallup in the book In God’s Name) surrounding the death of Pope John Paul I had centered on the notion that the pope had identified all the rats and that he was going to clean house by removing them all in a single act, but on the morning when he was to sign the order, he was poisoned prior to completion, or as he completed it, and the murdered removed the order. Dan Brown, Malachai Martin, and many other fiction writers have tried to weave a coherent hypothesis around something we all know: there’s some bad eggs in the batch — some Judases.

We’ve talked about this concept of Judases recently, citing Fr. Hardon. From the beginning, Judas was an Apostle who allowed himself to become possessed by the devil. That’s not hyperbole. It’s obvious from the symptoms detailed in that show that we are dealing with Judases. Frontline isn’t going to go there. Most news won’t go there, unless they are sensationalizing a strange story.

Let’s consider this for a moment, though — the problem is not isolated to the Vatican — the problem is error running throughout the Church. Evil, not just in bad acts, but in intentional error being taught and propagated by ordinaries of the Church!

Are we surprised that there’d be awful human behavior, when we know that Ordinaries of the Church have denied the real presence of Jesus Christ in the Blessed Sacrament? Think of that for a moment. The real presence is a basic concept of the Sacraments, and a fundamental truth of our faith! For a bishop, archbishop, or cardinal to teach that there is no real presence, but merely a symbol, they have betrayed Our Lord.

I recall in my own life, being told this very thing by an unnamed Ordinary of the Church when I was young: that the eucharist was a symbol of community and nothing more. How much damage to the Church did that Ordinary do by teaching me and the others that were there, or the others to whom he said that?

In another instance, I recall a pastor of a church, purportedly sent by the bishop to “regularize” the parish. This parish had regular adoration, 40 hours devotions, latin, chant, and other devotionals and lots of confession times. Nevertheless, the bishop felt it necessary to change the parish because people there were too rigid and tendentious. The pastor sent conducted a lent mission whereat parishioners were to go to a nearby parish for films and talks. The film was allegedly produced by the USCCB – at least I recall the film showing some sort of credit to that effect and the pastor claiming it to be so (for all I know, it was produced in the chancery of that archdiocese/diocese), and was titled “Are we Host gazers, or Host partakers?”

As the tile suggests, it was a full assault on the practice of adoration. It was abusive.

It was the third wave of direct attack on the pious practices and devotions of that parish, and it was coming from the bishop. It was ultimately successful, too — that parish has never been the same. Eventually, it was “renovated” and doesn’t look even the same anymore.

PBS Frontline isn’t able to understand how damaging that activity is. Even if they tried to report on it, they’d not have been able to wrap up the emotional ends as well as they did in the show. Nevertheless, that story wasn’t in the Vatican it is the frontline in the parish, the place where ordinary people are.

I’ve always chuckled that people called reacting to these things “extremism” — as if there should be no outrage, as if there were no victims. The truth is that the error is damaging, ugly, and real — it is evil. A further catalogue of the mess, which completes the image Frontline missed, is in the article I posted a while back on what really killed the Church in America.

The hope in all of this is the same hope Fr. Hardon gave when describing why the Devil is so strong today:  “that more grace abound.”  God does provide what we need, and we need saints and miracles today. (Maybe this convinces you that you’d like to fast for the pope or for the church this lent?)

How do we fix situations in parishes?

Update…. there was an embedded video here, from gloriatv, but it appears that the video has been taken down. The media # of the video was media=573517. Too bad.

This article, PBS Frontline: Secrets of the Vatican – a secular review of the symptoms of error is a post from The Bellarmine Forum.
https://bellarmineforum.org/pbs-frontline-secrets-of-the-vatican-a-secular-review-of-the-symptoms-of-error/
Do not repost the entire article without written permission. Reasonable excerpts may be reposted so long as it is linked to this page.