Reasons to Pay Attention to Solzhenitsyn, Mindszenty, and Ciszek 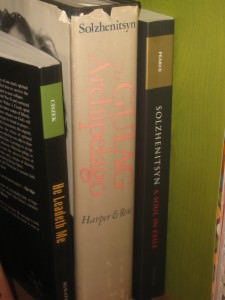 The excellent Catholic blog Rorate Caeli has a piece on the 4th anniversary of the death of Alexandr Solzhenitsyn. The author of the piece takes the opportunity to praise Solzhenitsyn and others within the Soviet Union for their heroism in standing up to the godless Communist regime. Similarly, he takes to task the Fathers of the Second Vatican Council for their tepid response to Communism–a departure from previous magisterial statements–and the policy of Ostpolitik. (Indeed, a prudential decision with which good Catholics can and certainly do disagree.) I have always wondered what the relations between the Church and the communist governments behind the Iron Curtain would have been like if the official diplomatic policy of the Holy See had been more along the lines outlined in the then–and still–official doctrinal analysis of communism: Pius XI’s Divini Redemptoris.

The anniversary of Solzhenitsyn’s death and the commentary on Rorate Caeli  got me thinking about the current regime in the United States. Taking Solzhenitsyn as a starting point and referring back to his Harvard Commencement Address of 1978, we see diagnosed the problems of the West. In nucleo, it is a loss of spiritual values and a loss of God. Indeed it is also a loss of courage in accepting the truth of God and what it means to be human. This is a theme that Blessed John Paul II returned to time and again. Who could forget the inauguration of his papacy and his clarion call for all to “Be Not Afraid.”  This courage–a cardinal virtue–was the same that animated Solzhenitsyn and his circle in the Soviet Union.  This same courage could be seen in the work of such heroes as Joszef Cardinal Mindszenty and the Servant of God Fr. Walter Ciszek, S.J. Never losing sight of the humanity of their captors and oppressors, these heroes nevertheless did not give in to the lie that was the regime. Additionally, they were realistic as to what could be accomplished with such people in power.  Even in their darkest hours, their reliance on God, trust in his Providence and courage in the face of evil is that for which they will be remembered.

Fast forward to our day. The faith is daily assaulted. The machinery of the federal government is tightening the noose on believers–making it ever more difficult to live the faith. Our pastors send conflicting messages. Some seem to think that such issues of fundamental import can be “tabled” for an evening of laughter and champagne. What are the faithful to do? Fr. Ciszek has the answer:

God does not expect a man single-handedly to change the world or overthrow all evil or cure all ills. He does expect him, though, to act as he would have him act in these circumstances ordained by His will and His providence. Nor will God’s grace be lacking to help him act. (He Leadeth Me, p. 47)

In the end, we must do the things we can do. Look around. We must first reform our own sinful lives and do our best in our corner of the world to bring the truth to others. Perhaps it is another rosary; maybe a candid conversation with a colleague; perhaps helping someone through a difficult problem. In the designs of Providence, I think we were all sent to live in these times following closely on the heels of the Solzhenitsyns, Mindszentys, and Ciszeks of the world. There is a reason these men are remembered. Their lives are proof that God loves us and has given us examples and–dare I say it–intercessors who know the struggles we face. Perhaps, these are part of the “divisions of the Pope” that Stalin cynically wrote off and that Obama and Pelosi pretend don’t exist.

This article, Reasons to Pay Attention to Solzhenitsyn, Mindszenty, and Ciszek is a post from The Bellarmine Forum.
https://bellarmineforum.org/reasons-to-pay-attention-to-solzhenitsyn-mindszenty-and-ciszek/
Do not repost the entire article without written permission. Reasonable excerpts may be reposted so long as it is linked to this page.