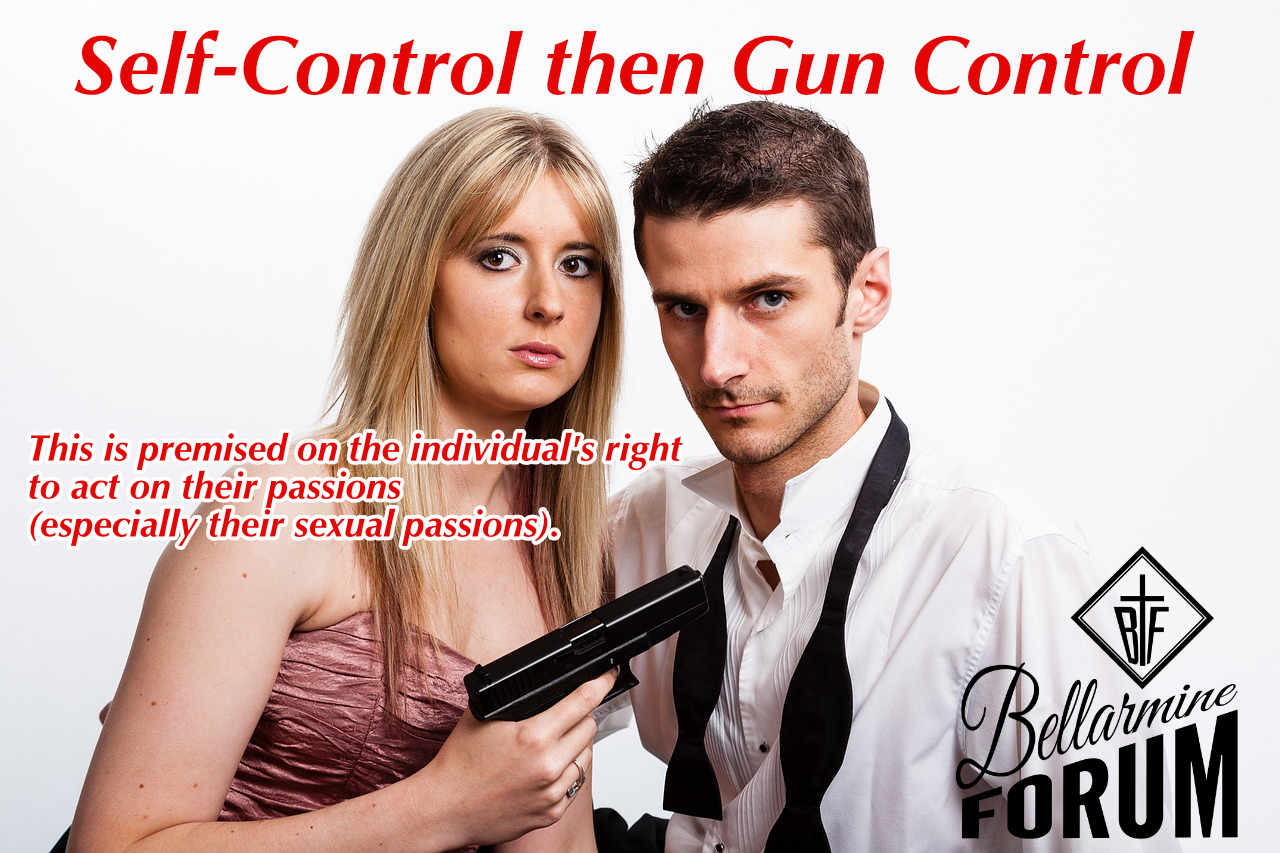 Gun-control arguments rest mainly on the principle that guns are inherently evil because they have the capability to kill, are used in mass murders, and mass murders happen too often.  The other argument is that the Second Amendment wasn’t intended to allow the buying of automatic and semi-automatic weapons; these are not necessary for self-defense.  Jimmy Kimmel raised this.  Some argue for a full repeal of the Second Amendment, while others argue for bans on types of weapons or accessories.  Many gun-control advocates use the term “assault weapons” when referring to standard rifles or semi-automatic weapons.

Unless a waiver is granted, people cannot purchase automatic weapons.   Semi-automatic weapons require the shooter to pull the trigger each time he or she wants to shoot a bullet, so are not “assault weapons” in the way talking heads mean.

Our Founders enacted the Second Amendment as an enumerable right.  Having come from Europe, the Founders knew how governments forcefully violated its unarmed citizen’s natural rights.  The Second Amendment was an insurance that American citizens could defend themselves against a tyrannical government, or other groups who could forcefully violate their natural rights.

James Madison in the Federalist Papers (No. 46), for example, stated:

“notwithstanding the military establishments in the several kingdoms of Europe, which are carried as far as the public resources will bear, the governments are afraid to trust the people with arms. And it is not certain, that with this aid alone they would not be able to shake off their yokes. But were the people to possess the additional advantages of local governments chosen by themselves, who could collect the national will and direct the national force, and of officers appointed out of the militia, by these governments…it may be affirmed with the greatest assurance, that the throne of every tyranny in Europe would be speedily overturned…Let us not insult the free and gallant citizens of America with the suspicion, that they would be less able to defend the rights of which they would be in actual possession, than the debased subjects of arbitrary power…”

At the heart of America’s education system and major media outlets is liberalism, more specifically, modern-liberalism.

Father Felix Sarda y Salvany wrote a book entitled Liberalism is a Sin in 1886.  It received the imprimatur of the Church and support of Pope Leo XIII. So, even in 1886 there were problems with liberalism’s effects, like absolute sovereignty of the individual from God.  Since then, liberalism has evolved further.  While liberalism of old was still rooted in the concept of natural rights flowing from a Creator, today rights flow only from government, or the individual’s conscience absent faith.

Modern-liberalism embraces the philosophies of individualism (as did liberalism of old), hedonism, immorality, relativism, egotism, consequentialism, nihilism, and atheism.  At its base is an intolerance towards virtue and objective truth.  Especially opposition towards Jesus Christ’s teachings through his apostolic church.  Setting aside a discussion on Christianity, modern liberalism has shown antagonism towards God in general.

The 2012 Democratic Convention took a vote whether to include God in its convention, and the overall vote was “no.”  Prayer was removed from class rooms; the Ten Commandments from courthouses; and even a Catholic University decided to remove statutes of saints to make the university more inclusive.  This is what modern-liberalism does. It spreads an ideology devoid of foundational truths (including natural law) found in obedience to God.  It is antagonistic to the idea of fostering virtue over personal feelings in schools.  For modern-liberals, there is no truth other than the truth that all philosophies, religions, and beliefs are equal and deserve equal respect.  An individual’s conscious becomes the arbiter of truth.  So, no one has a right to tell that individual how to live his or her life.

Due to these –isms, a culture of death rather than a culture of life guides American thought.  Contraception is a philosophy that children are a burden rather than gift.  This seed (right to contraception) led to abortion and euthanasia driving the rights debate.  Human life is now expendable.  It does not have value if individuals choose it doesn’t have value.  This is premised on the individual’s right to act on their passions (especially their sexual passions).  So, self-control and virtue are easily dismissed.

Where do we go?

A free society cannot exist long when its citizens cling to modern-liberalism.  The culture of death is a road paved with despair, anger, fear, and hatred.  It leads further and further from the desire to protect the natural rights of all (unborn to old).  The Las Vegas shooter was a nihilist; the Texas shooter an atheist.

Inanimate objects do not cause murders, but individuals with depraved hearts and minds do.  Kimmel is right when calling for common sense solutions.  A common sense solution includes not only reasonable gun-control but forming a virtue-based society.  Virtue taught in schools.  Virtue, self-control, and even a turn to God, included in the media’s response to shootings.  Some will say that changing the educational system is impossible.  It isn’t when the people demand it of their elected representatives.  Kimmel could advocate for adjusting the educational system to require teaching virtue and prayer.  Media talking heads could spin self-control of passions.  Self-control of passions and virtue is a common sense approach that should be included in advocacy for gun-control.  Gun-control first needs self-control.

This article, Self-control then gun-control is a post from The Bellarmine Forum.
https://bellarmineforum.org/self-control-gun-control/
Do not repost the entire article without written permission. Reasonable excerpts may be reposted so long as it is linked to this page.