The First Church Liturgy: Angels Adoring, Shepherds Give Glory – All History is Changed 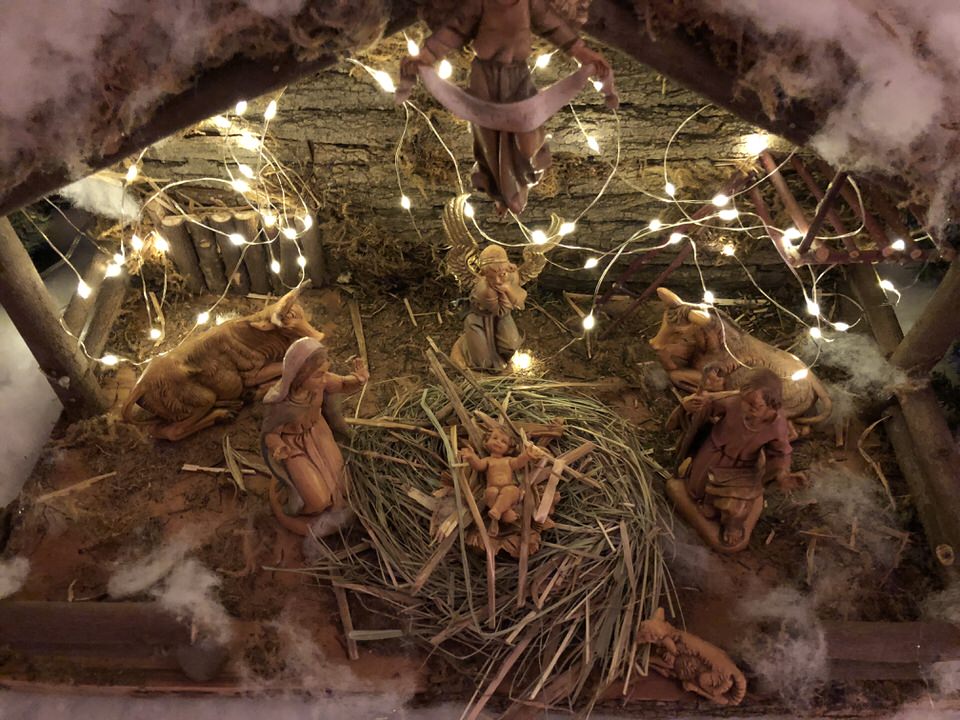 Have you ever had a smell get stuck in your nose that persists all day? No matter how much you wash, go somewhere else, or do something different, there is an imprint on your system that keeps pressing that odor into your thoughts. The smell is probably gone, but your nose keeps registering it.

Have you ever smelled livestock? A stable? They do that to me. I can think of being at them and the smell is there in my nose.

It stinks. An acrid odor unique to them pierces your nose as a knock on the door from a pushy salesman. There’s no mistaking it, either as they all have this pungent potion of decaying straw, mildewy wood, animal droppings, wet animal hides, and dirt.

Shepherds don’t fair much better. A little B.O. from working hard, the smell of the animals, and they are like an aroma therapy wick diffusing the same odors. They are the kind of people that everyone hopes would leave because the smell.

I love it. This is where Jesus came to be born!

Today — the day our Saviour was born — commemorates that day in a real, stinky, and pungent stable where Jesus was born of Mary!

Polish koledy (carols) are chock full of accounts that the shepherds were visited by angels who told them about this great birth. If Mary’s Magnificat weren’t enough hint that all of history pivoted on this single moment, the shepherds were the first to hear it from immaculate creatures, angels. God seemed to put a squeeze play on creation by taking the highest order of intelligent creatures, angels, and matching them with the lowliest of intelligent creatures. By lowly, I mean not only man, but men that nobody wanted to be around. Stinky, smelly guys.

Almost like zipping a zipper by which everything in between would be ensnared, God put these together for His Nativity.

The First Liturgy:  Angels and Shepherds

From there, the shepherds, having heard the news, and the singing of the Angels, came to adore the new born Jesus.

Don’t think Mary and Joseph were tight-lipped about what was happening either! For Heaven’s sake, the angels were already declaring that Christ was born! There was nothing for Mary or St. Joseph to hide, but to let these poor stinky shepherds come adore Jesus Incarnate. You know there was conversation!

Someday, maybe, God willing for each of us, we can ask them what they said!

So, there you have it:  angels, shepherds, Mary, and Joseph around God Incarnate. It was the first liturgy (you can bet those angels didn’t sing any crappy hymns!).

Stinky, smelly, and a mess. That’s how Jesus remembers His birth — and you can bet the smell is one He remembers. But He loves it!

He came as a new born child that He may redeem us, change all of history, even down to making Ham something we can eat (that’s what’s on my plate today… in fact, the whole house smells of glorious ham and kielbasa)!

You get to be part of the moment that changed it all! Let Our Lord remember your stinky self as one of the shepherds that bent a knee in the stable.

Revel in it… smell and all!

Christ is Born! Glorify Him!

This article, The First Church Liturgy: Angels Adoring, Shepherds Give Glory – All History is Changed is a post from The Bellarmine Forum.
https://bellarmineforum.org/first-church-liturgy-angels-adoring-shepherds-give-glory-history-changed/
Do not repost the entire article without written permission. Reasonable excerpts may be reposted so long as it is linked to this page.