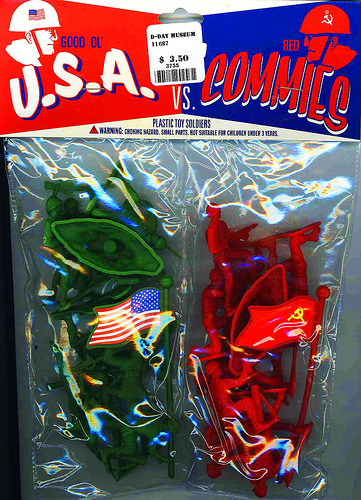 What does the combination of

have in common: animosity, or, specifically: dialectic and historical materialism?

Historical materialism sees the world as a process based on modes of production, specifically within capitalism. Dialectic materialism was a term used by Hegel, Marx, and Engles, popularized by Stalin, Lenin, Mao and Lukacas (who became a leader of Democratic Marxism), to describe socioeconomic interaction in a materialistic context. According to these thinkers, because social ills are a result of economic and political autonomy human interactions result in class struggle. So, the dialectic drives change. Mainly, change from capitalism to communism. The process from capitalism to communism is an animosity towards autonomy from Government and autonomy from God. During this process, in a free society, economical freedoms move toward communism, and natural rights to humanistic rights. Humanistic rights radically change the social structure.

The above process leads to three levels of hate: hate towards

This hate will lead to one thing: acquiesce, consent, and ratification of violence towards Jews, political conservatives, and Christians who oppose progressive philosophical views or who violate man-made laws.

Let’s analyze each of the above combinations and how it gives rise to ideological and actual hate within the three levels above. It will conclude that these unmoving ideologies lead to suppression and elimination of ideas and classes of people from society. Note, modern liberalism and progressivism pervades both the Democratic and Republican party, so this article is not pro/con either.

Recent incidences show that liberals react violently to opposing views and that violence is often excused and sometimes defended by journalists, talking heads, or online news outlets. We saw this in

All of these examples of violence in speech and action is indication of hate towards opposing ideas and civil debate. Oftentimes, journalists justify the violent action or speech based on what the violence is in reaction to. Violence in the name of an idea opposed to progressive liberalism, however, would not be tolerated. This shows a leaning towards acceptance of a State, or state of affairs, that prosecutes ideas rooted in Judeo-Christian principles.

Transgenderism equals totalitarianism. State ideology imposed upon the masses in the name of conjured progressive norms to change a society into its debased ideology is a Machiavellian rule of governance. Obama and his Departments disregard the sovereignty of the people or the legal and moral boundaries of State, school and hospital authority.

Obama, liberals, and progressives disregard a State’s authority, the people’s will, and Judeo-Christian principles rooted in Scripture, Tradition, and the natural law. They aggressively seek to regulate the people, in their public and private life, by enforcing their personal, unethical views. Progressives and liberals want to redefine law, impose human law, and make threats if their will is not followed. This displays despisement for State and business sovereignty, but also hate towards the Creator and denial of creation.

American progressivism is built on changing social norms and structuring social justice on human passions. Progressivism asserts to advance education, science, technology and social well-being. True progress makes advances in the sciences, arts and social justice, but not at the expense of the common good or goodness. Goodness being virtue and God; doing what is good and avoiding evil. Progressivism is a philosophy of individualism, relativism and State endorsed economic growth birthed by John Stuart Mills, the Enlightenment, Marx, and Stalin. It could even be said that Hitler was a progressive if we equate progress in the arts and sciences as a good separate from morals.

Yet, most agree that Hitler was not a progressive regarding human rights.

There are limits, then, to progressivism. American progressivism has no checks other than what either the Nationalist State dictates or what the ideological elite accept as the new moral norm. For example, the Nationalist State dictates its will on the people to accept social rights such as abortion and economic rights by Government intrusiveness in wages. The Nationalistic State imposes its will on the people through the Board of Education, IRS, HUD, or other agencies with the threat of withholding benefits or funding. Ideologues in journalism, college campuses, and politics impose their moral code on the people through rhetoric or shunning of those who disagree.

These progressive moral and economic codes boil down to hate towards the common good and goodness. In their minds, they are advancing the common good by changing the definition of marriage, introducing males into female bathrooms, killing babies in the womb, Government setting the minimum wage, high taxation, and high spending. Yet, these are contrary to goodness. They violate every social, moral right anchored in natural and Divine Law. These are also contrary to the common good.

The common good includes preserving the State from aggression, protecting life, promoting marriage (marriage between a man and a woman is the foundation of society), ensuring mechanisms are in place to check Government power, permitting personal and creative growth in the sciences and arts without Government intrusion, moderating equitable distribution of public burdens, dispensing justice, showing proper concern for workers, and defending opportunities for growth in virtue and holiness.

Griswold enacted a new law leading to conflicts with natural law: the right to privacy. This case is important to progressive and liberals because it is the seed to the trunk of the Nationalist State and journalistic ideologues, the branches being some of those described above. Griswold created a mantra: control over one’s body and freedom from Government intrusion in one’s life. Most agree in preventing government intrusion, yet, this freedom from intrusion turned into hate towards objections made to the branches of the tree, and to the seed.

Ironically, Government intrusion has become acceptable to impose human dictates of “privacy” upon individual lives and businesses. Nationalist imposition contraception mandates, homosexual marriage and transgenderism is justified by progressive elites because it is in the name of their definition of “privacy” while allegations against Planned Parenthood for harvesting and selling baby parts is not actively pursued because it contradicts their mantra.

Griswold led to a philosophical hypocrisy and conundrum for modern liberals since they must keep paving the road to greater and greater manmade rights that violate reason, science, and God. The right to privacy is good but has moral limits; Griswold opened an unbounded Pandora’s Box.

To this New Godless State, We are the Enemy

Human rights must be rooted in natural and Divine Law, otherwise rights are defined by the ruling elite in power, have no objective boundaries, and eventually result in suppression of human ability and freedom. When a Government sees humanity as flawed, unable to progress on their own, and as classes whom are in constant struggle against one another, Government will intrude to create rules to solve the struggle and guide the flawed. Soon, human freedom is ruled by the Government and what their definition of freedom is.

Rather than a people working in harmony to solve a problem governed by reason infused with faith, people are separated into the Government’s class identifications and made to view themselves within that class. The ideologues who support the ruling elite in political power promulgate the philosophical underpinnings of the elite’s rules to govern the struggling and fighting classes. There is an agreement, whether made behind closed doors or not, to promote the progressive ideas upon the people who cannot, or should not, rule themselves.

Those who oppose the Government’s dictating rules, oppressive laws, intrusive human moral codes, and ideologues, are made into a class of people who are against progress, science, tolerance, or any other label the ideologues and Government gives them; termed the opposing class. Soon, intolerance towards this opposing class boils into a struggle between the elite, ideologues and opposition. This struggle turns to violence because the opposition refuses to succumb. Yet, this violence is initiated by the liberal, progressive elites and ideologues and is directed at the opposing class. This violence is excused in the name of progress and the only outrage not heard is by the opposition. Marx, Stalin, Lenin, and progressives teach this is a natural process in a changing, social system.

History is a book of created class struggles. This time around the opposing class created by our Government will be scripturally rooted Jews, Christians, and conservatives — apparently anybody who believes in God and His Commandments.

Mary, Mother of Mercy, pray for us!

This article, The 1 Root of Liberal Violence, Progressivism, Liberal Journalism, Griswold Contraception, and Police State is a post from The Bellarmine Forum.
https://bellarmineforum.org/the-1-root-of-liberal-violence-progressivism-liberal-journalism-griswold-contraception-and-police-state/
Do not repost the entire article without written permission. Reasonable excerpts may be reposted so long as it is linked to this page.